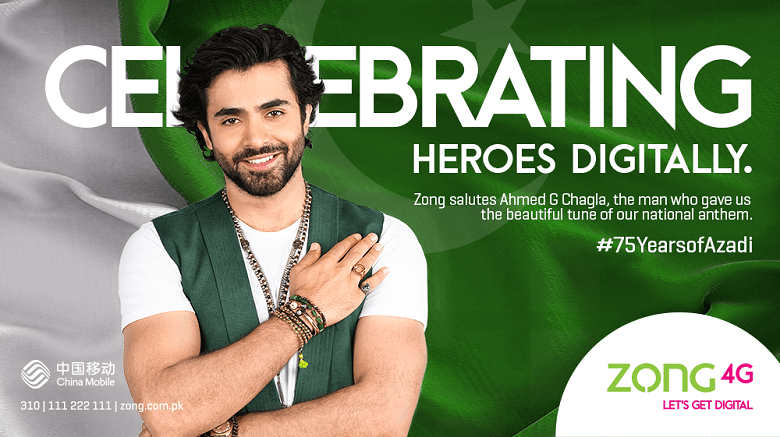 LAHORE, Pakistan: Pakistan’s leading mobile network, Zong 4G, marks this Independence Day by paying tribute to the unsung hero of Pakistan, A. G Chagla, as it releases its much-awaited campaign, The Notes of Chagla.

Always the trailblazer, the company once again takes the lead as the first brand to pay homage to A.G. Chagla, composer of the National Anthem. With the message of hope, optimism, and unity, Zong 4G proudly commemorates 75 Years of Azaadi by presenting, through the eyes of a young boy and the inspiration he finds in the National Anthem.

The short film introduces the audience to the boy, who is working on his musicology thesis. Seeing him struggle, his mother encourages him to explore the rich cultural heritage of Pakistan. Intrigued, the boy conducts research to find that one ideal melody. While on this journey, he discovers the National Anthem, Pak Sarzameen, composed by A.G Chagla in 1949, only one year after he was appointed to the National Anthem Committee (NAC).

The film, titled ‘Celebrating 75 years of Azadi–The Notes of Chagla’ empowers the protagonist to utilize the power of digital to shed light on the stories of Unsung National Heroes, both big and small. Featuring acclaimed actors Shehryar Munawar and Simi Raheal, the film will be distributed across all of Zong 4G’s social media platforms.

“We are committed to working towards uplifting Pakistan and paying tribute to the heroes who have and are working towards prosperity of the nation. By shining a light on real heroes that have made Pakistan their passion, we are encouraging millions to see the spirit and join hands with us to build a Digital Pakistan!” shared the spokesperson of the industry-leading communication and connectivity partner.

Zong’s 75th Independence Day campaign is evidence that digitalization is the present and future of the nation. With the tagline of Let’s Get Digital, the company is demonstrating that through its commitment to harness the power of the digital network; it inherently evokes great sentiments of passion and zeal for a change in the country and inspires every Pakistani to contribute to the country’s success in whatever manner they can.