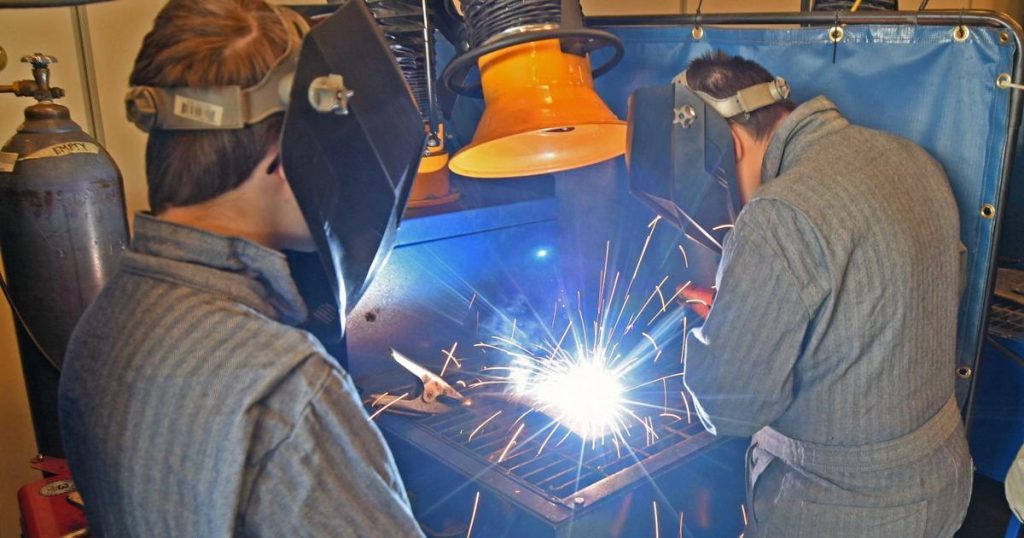 On a recent afternoon at Bismarck Public School’s Career Academy, students were grouped around electrical circuits and various motor vehicles as part of the district’s career and technical education program.

Others completed classwork on their computers, while some donned welding helmets and watched sparks fly at work stations.

The career academy, housed on the Bismarck State College campus, has several floors of classrooms, computer labs and hands-on learning spaces, ranging from a mechanic shop to hospital rooms, for students looking to explore career and education options outside of a four-year degree.

About 2,000 students from BPS and other area schools are enrolled in the academy, and the number is projected to keep growing. That has prompted the school district to look to expand its career and technical education facilities and programs, and also the grades to which those programs are offered.

BPS has applied for a $10 million matching grant from the state of North Dakota to expand its career and technical education program in response to that increased interest and rising enrollment. The district is waiting on the results of the grant application process. The grant and subsequent matching funds from the district would go toward repurposing existing space at the Hughes Educational Center, which houses administration and the Life Education Program; an expansion at the Career Academy building; and a building in the Silver Ranch area.

The district would be required to provide matching funds for the grant and plans to use the Hughes building’s valuation of $14 million as its portion. The total cost of the expansion is estimated at about $15 million, with $5 million financed by district funds and private donations.

The Career Academy and Technical Center has been headed by Dale Hoerauf for the past 12 years. He said that over the last 10 years or so, there’s been a shift to promoting broader career and educational options for kids outside of a four-year university degree.

Students at the Career Academy have the option to take classes in aviation, welding, graphic design, health care or other fields. The classes provide more options for students, including those who might not do as well in a traditional classroom setting, Hoerauf said. Even if students don’t pursue a career in a specific trade, they’ve still learned valuable life skills, he said.

Bismarck High School junior Bailey Schmitt and Century High School senior Olivia Tomanek were working on the starter motor of a Toyota the afternoon of Nov. 19. The two said they typically partner up in their automotive tech class and that they’ve enjoyed learning more about vehicles. Tomanek said she has always been interested in cars and was initially interested in taking the class in case she ever needed to perform some work on her vehicle.

“Now I’m learning so much more than I ever thought I would,” she said.

Schmitt said she thought she wanted to go into construction when she started at the Career Academy, but after she started driving, she wanted to learn how to fix her car. She thinks she might become a mechanic in the future.

Students also can take their core classes such as English and science at the Career Academy through the learning lab. Those classes are personalized to each student, so a teacher comes up with individual lesson plans for a few dozen children, English teacher David St. Peter said. Math and science teacher Tammy Anderson said she has a student in the welding program, so she’s trying to incorporate welding into his classwork.

But the facility is running out of space.

The medical careers section was built too small initially; the program was an “if you build it, they will come” scenario, Hoerauf said. Interest in the health sciences has grown during the coronavirus pandemic. The health care classroom features a hospital-like setup with realistic dummies for students to practice on, but there are just six bedside settings.

Hoerauf in the future also wants to increase program offerings by adding HVAC — heating, ventilation, and air conditioning — electrician and dental assistant programs, which he says are in demand.

Enrollment in the district’s career and technical education program increases about 11% annually, according to the district. The desire to expose students to these career pathways earlier also is driving the proposed expansion.

The extra space is not only needed for existing programs, but also to get middle school students involved. The current program is structured so that freshmen and sophomores can take exploratory courses to discover what paths they like. Juniors and seniors take more specialized classes, Hoerauf said.

“Bringing this to middle school is going to give students the opportunity to try out and learn more about a career that they might be interested in and find out if they love it or don’t love it, and parents don’t have to pay for it,” she said.

Rabenberg said the Hughes expansion would also help with space constraints for middle schools, where enrollment is expected to exceed capacity by the 2025-26 school year. BPS also is building two elementary schools in north Bismarck to address a rising number of students.

The district also has plans to bring career and technical education to elementary students in the future. Rabenberg said the district received a separate $10,000 grant for a “makerspace” at Prairie Rose Elementary, which high school students at the Career Academy are helping to develop. A makerspace is a place to learn about the design process, and the goal is for students to learn how to improve upon their creations, Rabenberg said.

“We’re trying to create an alignment K-12 for career and technical education,” she said.

Get our local education coverage delivered directly to your inbox.