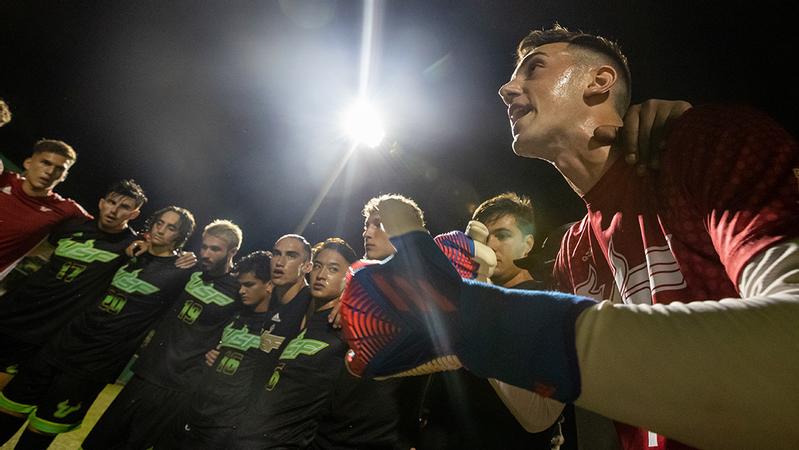 
TAMPA (Oct. 8, 2022) – The University of South Florida men’s soccer team returns home to Corbett Stadium to start a three-match homestand beginning with No. 14/21 Tulsa on Sunday. Kickoff is slated for 7 p.m. and can be seen live on ESPN+. The Bulls will also face Stetson on Oct. 12 at 7 p.m. – in their final nonconference match of the season – and FIU on Oct. 16 at 6 p.m. closing out the three-match stretch.

South Florida is looking to improve its unbeaten streak to five matches after defeating Mercer, 2-0, playing Florida Atlantic to a 1-1 draw, its first American Athletic Conference match defeating Temple, 2-1, and a 2-2 draw at UAB the last four times out.

Alex Sannes is one of two players with a team-high four points (2g) for South Florida, joining Marcus Victorio (1g, 2a). Shion Soga is third in scoring with three points (1g, 1a).

THE SERIES VS. TULSA

– Last season, the two teams faced off twice with South Florida recording losses in each outing … The most recent win against the Golden Hurricane was on March 6, 2021 … The Bulls have lost three straight after winning six consecutive matches.

A LOOK AT THE GOLDEN HURRICANE

– Tulsa is currently 6-1-2 on the year and 2-1-1 in The American … Their latest win was a 3-0 victory over FAU on Oct. 5, handing the Owls their first conference loss of the season.

– Tulsa had an ensemble of upperclassmen give way to their Wednesday win … Will Edwards, Malik Henry-Scott and Henry Sachs all recorded a goal during the match.

– South Florida extended its unbeaten streak to four matches on Oct. 5 with a 2-2 draw at UAB.

– Jeffrey “JT” Copper got the Bulls on the board first in the 34′ beating the Blazers’ goalkeeper Jack Hudson, the reigning AAC Goalkeeper of the Week, off an assist from Jemone Barclay … That was the only goal of the first half.

– The Blazers got on the board in the 57′ on a penalty kick that evened the match.

– In the 67′ minute Copper was issued a red card forcing the Bulls to play a man down the remainder of the match …  Soon after, Marcus Victorio served up a pass to Shion Soga to put the Green and Gold back on top.

– The Blazers got a free kick in the closing moments of the match; however, the kick was blocked by the Bulls’ wall but UAB eventually regained possession with enough time for one final push that resulted in a goal with five seconds left.

– Following the Tulsa match, South Florida will close out its nonconference schedule against Stetson at home on Oct. 12 at 7 p.m. … The match can be viewed on ESPN+.

CATCH THE BULLS ON BULLS UNLIMITED

–  All of USF’s home regular-season matches will be streamed live on the ESPN+ platform … The American Athletic Conference and ESPN began a new 12-year television rights agreement which started in 2020-21 … Subscriptions for the ESPN+ app are $6.99 monthly or $69.99 annually and can be packaged with Hulu and Disney+ streaming services.

– In addition, all home matches this season will be broadcast live on USF Bulls Unlimited, with Darek Sharp on the call. Bulls Unlimited is available via the free Tune In app (search “Bulls Unlimited”) and provides static-free quality whether you’re listening on your streaming device, laptop or desktop.

Fans can purchase tickets by calling 1-800-GoBulls or at Ticketmaster.

All home matches this season will be broadcast live on USF Bulls Unlimited, with Darek Sharp on the call. Bulls Unlimited is available via the free Tune In app (search “Bulls Unlimited”) and provides static-free quality whether you’re listening on your streaming device, laptop or desktop.

In addition to Bulls Unlimited, all of South Florida’s home regular season matches will be streamed live on the ESPN+ platform. Subscriptions for the ESPN+ app are $6.99 monthly or $69.99 annually and can be packaged with Hulu and Disney+ streaming services. A step-by-step guide for subscribing to ESPN+ is located here.

USF Men’s Soccer competed in the school’s first ever intercollegiate athletic contest on Sept. 25, 1965, beating Florida Southern 4-3. Since then, the oldest program on campus has built a winning tradition, claiming 14 conference championships and making 21 NCAA Tournament appearances, including 3 trips to the elite eight.

The Bulls have advanced to the postseason in 18 of the past 20 years, including 12 NCAA Tournament appearances during that period.

The University of South Florida men’s soccer team was well represented on the AAC postseason All-Conference Team in 2021 with four players earning honors. Highlighting the Bulls’ honorees was the American Athletic Conference Co-Goalkeeper of the Year, Kazuna Takase, along with first-team selection Shion Soga. In addition, Takase was also selected to the All-Conference Second Team along with Salvatore Mazzaferro, and Josh Gomina was named to the AAC All-Rookie Team.