US Secretary of Education underlines need, opportunity for tech education in Conn. visit 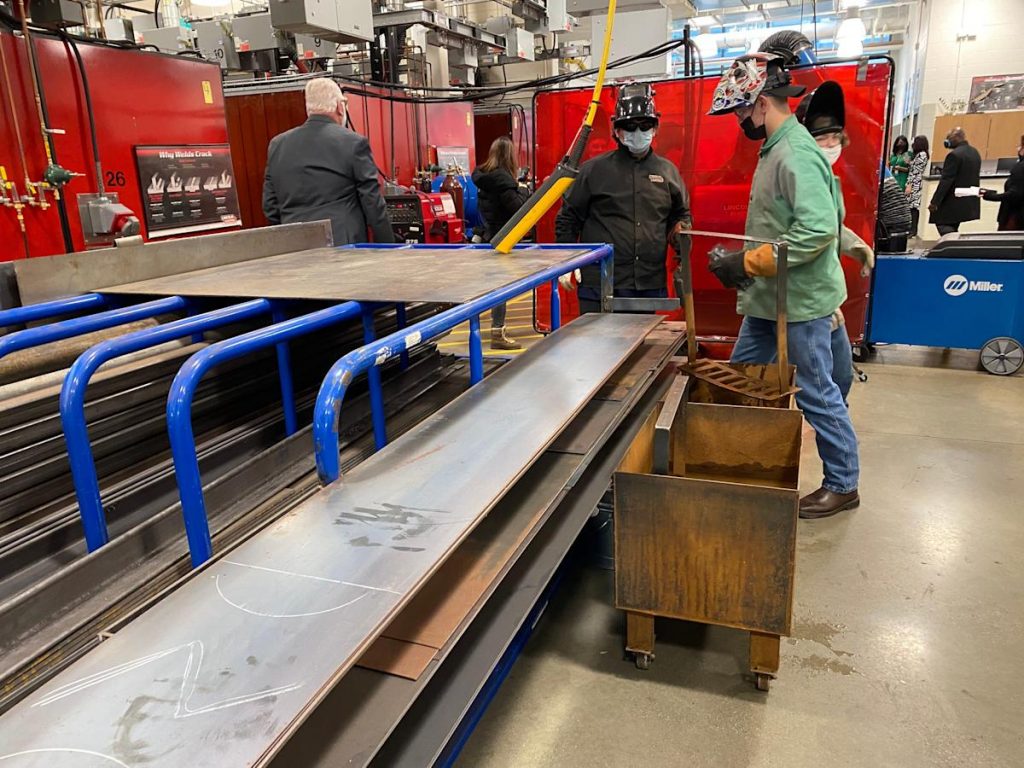 GROTON — U.S. Secretary of Education Miguel Cardona paid a visit to Groton Friday where he toured a technical high school whose curriculum he championed as a model for schools across the country.

“It’s still the exception, not the norm,” Cardona said of the technical training offered at Grasso.

“We have to start thinking about what career and technical education options we give to our students at all high schools and the jobs are there — with the infrastructure bill there are going to be more…high skilled, high paying jobs that are available that we need to make sure we are preparing our students for,” added Cardona.

With an enrollment drawing from 24 surrounding cities and towns, Ella T. Grasso offers an integrated curriculum based around training targeting 12 specific technologies including metal fabrication, Information Technology, and welding and ship-fitting.

“This is an example of what we want to see across the country but we have beautiful facilities working not only with our K-12 students but with our adults after school — like these technical schools having a second shift, if you will, to provide opportunities for those who are looking to re-skill, those who want to get jobs,” Cardona said.

Back to work: Eastern Conn. program serves as example as state puts $70 million into workforce training

In one of the school’s classrooms on Friday, sparks flew from welding torches held by students. Cardona looked on, at one point donning a welding helmet, or hood, to observe some of the work.

Welding is a central component for several of the technical school’s training programs and can fill a demand for employment largely driven by work being performed by the Electric Boat Company situated on the banks of the Thames River in Groton.

The submarine manufacturing performed by Electric Boat has long been a staple of the regional economy and currently has nearly 700 positions ready to be filled, according to Courtney, who said expanding enrollments and programs like the ones at Ella T. Grasso are key to filling those positions while work continues to create pathways to additional companies and industries.

Both of those challenges became more complicated by the pandemic.

“If you look at the number of classes and the number of kids that were enrolled [at Ella T. Grasso] pre-COVID, there was a big drop. It was just because you can’t, before vaccines and everything, you couldn’t have kids in close quarters,” Courtney told The Bulletin.

The congressman noted a recent meeting with the school’s administrators and said while there are more classes now than there were before the pandemic began, “enrollment is still down because of social distancing.”

“They can go higher with more classes because it’s all a question of just funding for slots,” he added.

Courtney also noted the opportunities expected from the recently passed $555 billion infrastructure bill when he and Cardona sat down with a group of several students in a machine room down the hall from the flurry of welding training.

Carlos Rodriguez, 17, of Montville, is a senior in the automotive program. He said his dream car is a 1970 Dodge Charger; but told the education secretary he was considering plans to join the military before attending college, with his ultimate goal being to open his own repair shop.

“Honestly I have never talked to anyone with that amount of power, it was a great honor and I was honestly nervous,” he said of his visit with the secretary.

Richard Parsons, 15, of Montville, is a sophomore studying Informational Technology. He told the secretary he wasn’t quite sure about a career path just yet. Right now he said he is learning how to write computer code using the JavaScript language, along with learning how to use spreadsheets and create graphics as he works towards a series of certifications required for training.

“I did a few programming camps and learned some stuff… and then I came here realizing I didn’t know that much and just decided to keep going,” Parsons said.

Other students represented programs including one for plumbing and heating curriculum and another focused on bio-science and environmental technology.

“You are connected to exactly where this country is going, with the infrastructure bill that just passed, we talk about automotive technology and investment in electric vehicles that are just going to transform everything,” Courtney said, using Rodriguez’s program as one example, before noting building technology and environmental science as two others.

“And Information Technology, just take your pick,” Courtney told Parsons, the only non-senior to meet with the education secretary and lawmaker. “Everything is going to be based on it.”

Before pursuing a career in education that ultimately led him to the White House as Secretary of Education, Cardona, a Connecticut native, graduated from Wilcox Technical High School– one of 17 technical high schools in the state.