UK’s Taskmaster Is Finally Taking Over the World 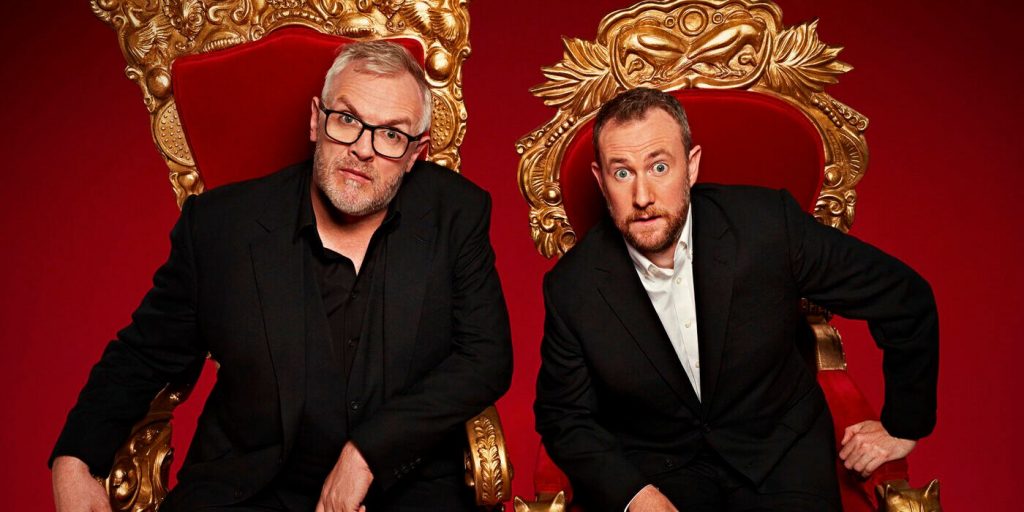 Taskmaster now has its own worldwide streaming service, ensuring that the UK series’ anarchic hilarity will touch every corner of the globe.

Taskmaster is finally taking over the world. Not the Marvel Comics supervillain featured in the very expensive Black Widow movie — the hit British television series that happens to be the funniest thing on the planet. Created by comedian/musician Alex Horne and featuring actor and comedian Greg Davies in the title role, the game show assembles five celebrities, gives them seemingly impossible or humiliating tasks, then awards victory more arbitrarily than The Boys: Diabolical star Aisha Tyler when she hosts Whose Line is it Anyway?

It’s utter madness. Yet the series has never gotten its due in the United States. Comedy Central briefly tried an American version hosted by Reggie Watts, and aside from a pre-The Good Doctor Freddie Highmore, the show bombed spectacularly. More recently, The CW picked up broadcast rights to the original series and then dropped it after just one episode. American fans have spent years scrambling for episodes on the official Taskmaster YouTube channel — until now. As announced by Deadline, viewers worldwide can now watch episodes through the stand-alone streaming service Taskmaster Supermax+.

This is fantastic news for Taskmaster fans, and even for folks who’ve never seen it. As the service’s name indicates (clearly making fun of HBO Max and the about to be cheaper Disney+), the show has a tongue-in-cheek sense of humor. It’s uplifting, unabashed and uncensored comedy featuring some of Britain’s most interesting people. Taskmaster Supermax+ currently has the first three seasons, which include bits like Romesh Ranganathan’s earworm “Tree Wizard” and Doc Brown turning a nursery rhyme into a rap video. The service is adding more episodes throughout March and April, in both censored and uncensored versions, and will eventually include every season plus international versions.

The reason why Taskmaster is such a cult hit is that it’s one-part game show, one-part sitcom. It’s ridiculous people put into absurd situations and left to their own devices. There’s no better example of this than Season 7, which created a bitter rivalry between future Great British Bake Off alum James Acaster and Rhod Gilbert. James was consistently put off by Rhod’s not doing anything of any importance and it all came to a head over the definition of the term “extension.” To say anything more would be spoiling one of the great comedy moments on either side of the Atlantic.

But the show isn’t just about creating chaos. The strange challenges often lead to the contestants coming up with genuinely unique solutions, like in Season 5, when Mark Watson and Nish Kumar were asked to perform a song about a complete stranger. They only got to interview her for five minutes, but the duo’s end result was better than anything that’s come out of American Idol in the last five years. Viewers have great fun seeing how the stars interpret each challenge and hypothesizing what they might do in the same position. The series is creativity at its best.

RELATED: A British Version of Saturday Night Live Is In Development

What seals the deal is the timeless double act between Davies and Horne. They’re comedy’s version of Din Djarin and Grogu, without the tiny battle armor. It works because before he became a comedian and TV star, Davies was a teacher — so he knows how to wrangle an unruly crowd (an apt description of any Taskmaster cast). He’s the straight man to everyone else’s crazy. Horne is the middleman between the two, a sort of lawful neutral where he keeps the show going but also advocates for the contestants and often gets roped into their schemes. Between the two of them, they create a whole world for the show to exist in.

Fans can now watch Taskmaster online legally and ad-free by going to Taskmaster Supermax+ and signing up for a monthly membership ($5.99) or an annual plan. That’s a relatively cheap price compared to other streaming services, and while it only has one show, viewers will probably find themselves rewatching “Tree Wizard” or Mike Wozniak doing anything more than half the content on other streaming services. Taskmaster is finally taking its deserved place in America’s comedy spotlight and everyone gets to reap the benefits for about the cost of a trip to Starbucks.

Euphoria: Fez’s Big Night Got Ruined In the Worst Way

Brittany Frederick is a TV Features Editor at CBR. She has been a professional journalist in TV, film and theatre for over 20 years. Her one goal is to interview Jonathan Groff, but she’s sung with Adam Levine and gone 200 MPH with Mario Andretti while appearing in Variety, EW.com, CNN and NBC. Email her at bfrederick@brittany-frederick.com, visit TVBrittanyF.com, and follow her on Twitter @tvbrittanyf.