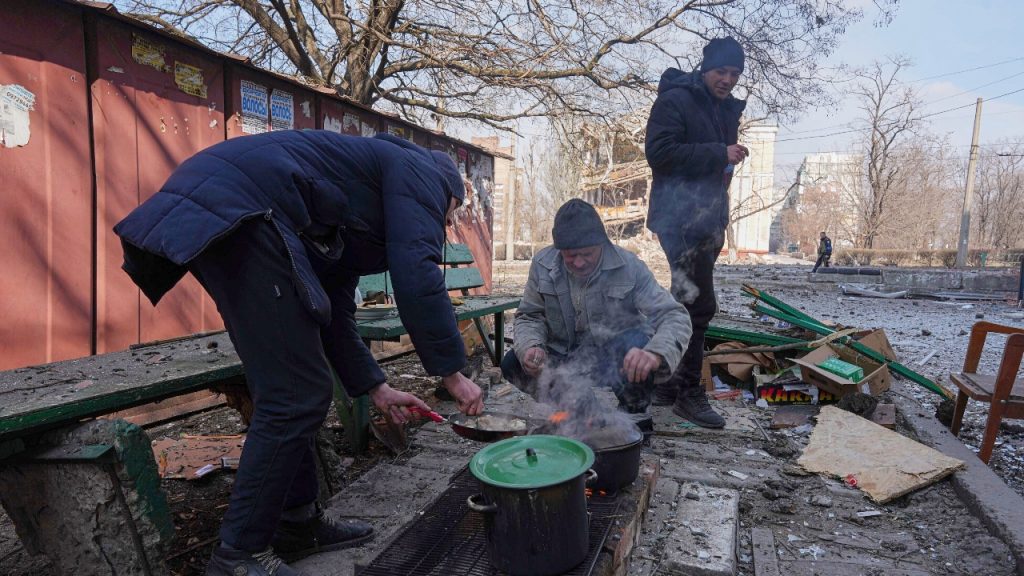 A Ukrainian coordinator for the humanitarian corridors being set up to evacuate civilians in the besieged country said cities like Mariupol, which have come under harsh shelling from Russian forces, are “on the verge of survival.”

Heavy shelling of the port city, which Tetiana Lomakina described as a “strategic access point” for Russia, began last week when Russian forces targeted a children’s hospital and maternity ward, injuring 17 people and killing five others, including a mother and her unborn baby.

Ukrainian emergency employees and volunteers carry an injured pregnant woman from a maternity hospital damaged by shelling in Mariupol, Ukraine, Wednesday, March 9, 2022. She and her baby did not survive.  (AP Photo/Evgeniy Maloletka)

In Kyiv and Kharkiv, which have also come under heavy fire, “a large number of people are hiding in the subway” and “spend their time reading the news, some play with the children, some can sing,” Lomakina told Fox News Digital. But, she said, “conditions are very harsh.”

“In cities like Mariupol, where there’s no light, water, air, heat, food, mobile communications, people are on the verge of survival,” she said. “According to eyewitnesses, their only saving grace is that relatives, friends and neighbors are helping each other, cooking on fires, taking water from streams or melting… the snow, lighting their homes with kerosene lamps, sleeping on the cold floor, which has caused mass illnesses among children and the elderly. There is no medicine. This is inhuman suffering.”

Men cook a meal in a street in Mariupol, Ukraine, Sunday, March 13, 2022. The surrounded southern city of Mariupol, where the war has produced some of the greatest human suffering, remained cut off despite earlier talks on creating aid or evacuation convoys. (AP Photo/Evgeniy Maloletka)

She said Mariupol was struck by 100 missiles on Sunday alone, and if attacks continue at that rate, “there will be no people left in the city to receive all the humanitarian aid we gather from across the world.”

The Russian military announced last week in a translated tweet that it would set up “humanitarian corridors from Kyiv, Mariupol, Kharkov and Sumy” to “the Russian humanitarian headquarters,” at the request of French President Emmanuel Macron to Russian President Vladimir Putin.

Ukraine’s Ministry of Foreign Affairs (MFA) said later that Russian forces were “shelling the humanitarian corridor from Zaporizhzhia to Mariupol.”

Anastasia Erashova cries as she hugs her child in a corridor of a hospital in Mariupol, eastern Ukraine on Friday, March 11, 2022. Anastasia’s other child was killed during the shelling of Mariupol. (AP Photo/Evgeniy Maloletka)

Lomakina explained that the “main problem” with coordinating corridors “is that the Russian side does not uphold the obligations they said they would.”

“Despite agreeing to a cease-fire, despite the International Red Cross being involved, despite the pressure from international partners, Russian soldiers still continue the shelling, make military advances, mine the roads and civil infrastructure, and actively impede humanitarian work,” she said. “Many towns and villages of Ukraine are burning right now. This means that millions of people need help” in Mariupol, towns surrounding Kyiv, Enerhodar, Sumy, Chernihiv, and others.

RUSSIA ANNOUNCES SANCTIONS AGAINST BIDEN AND TOP US OFFICIALS

“To do this quickly in the circumstances of active combat is incredibly difficult,” she explained.

Despite the challenges that come with setting up corridors for people to escape Russian shelling, morale among Ukrainian people remains high.

“We are seeing an incredible unity among Ukrainians and faith in the Armed Forces of Ukraine, as well as solidarity. A huge wave of volunteers is gaining momentum, there are queues gathering at military enlistment offices, queues at the border,” Lomakina said. “[M]en are returning to Ukraine en masse to defend their country.”

She added that while Ukrainians are “very freedom-loving and at the same time a peaceful nation,” they have been left “furious” since Russia invaded on Feb. 24 and have “stronger motivation” than Russian soldiers, whom she said were “lied to” and “told they were liberators.”

The official thanked the American people for their support and emphasized Ukraine’s wish for NATO to implement a no-fly zone over the country to prevent Russian missile attacks. U.S. and NATO officials say such a move would provoke a potential World War III.

“Russia wipes its dirty army boots on all the commitments made by the representatives of their country to Ukraine, the United States, the European Union, and the whole world,” Lomakina said. “After all, democracy and commitment to freedom are the things that unite our countries across the ocean.”