Ukraine war: Mobile networks being weaponised to target troops on both sides of conflict | World News 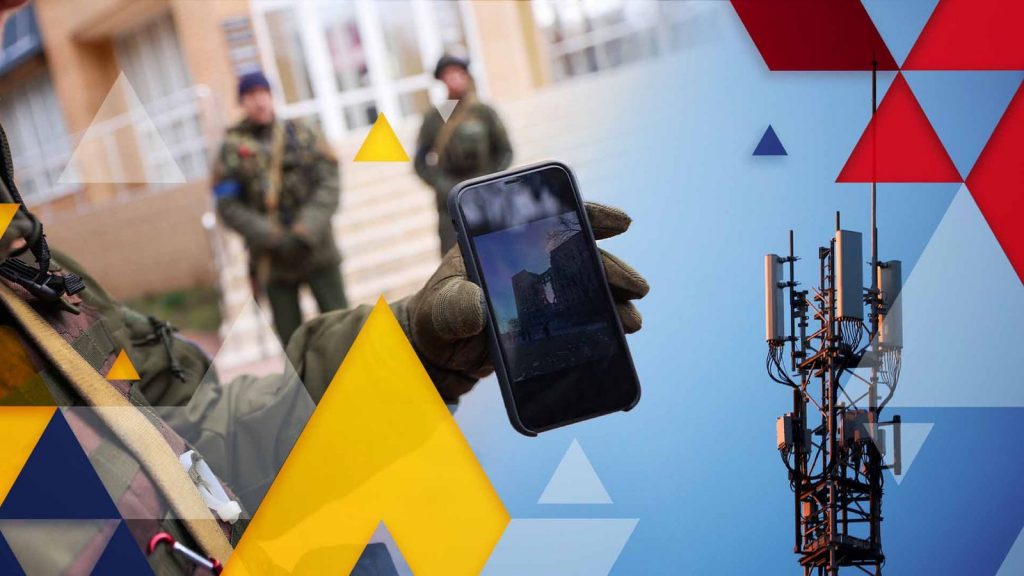 Ukrainian soldiers have described the dangers of using a mobile phone at the frontline in the conflict with Russian backed-separatists in recent years.

“When you hear a drone, you have about five seconds to leave your position and run. The rocket will fly in that fast.”

New evidence suggests the mobile networks are now being weaponised as an instrument of war in the current conflict, as each side tracks soldiers’ phones.

How are phones tracked on the battlefield?

Devices called cell-site simulators, which mimic a phone mast, are stationed inside drones and trucks and sent over the battlefield to pick up the signals of nearby phones.

The simulators trick the phones into measuring and reporting the strength and direction of the signal from several phone masts in the area.

By analysing these responses – whether the signal is stronger or weaker with different masts – it is possible to find out where the phones are likely to be and send in an artillery strike at that spot.

It is also possible that some systems can directly identify the phone’s location when the simulators connect to them, for example by accessing the phone’s internal GPS system.

Whichever method is employed – and the finer details are closely guarded military secrets – they all end with the enemy obtaining a reasonably accurate location of whoever is using the phone.

In Ukraine, it is known that the Russians are using the Leer-3 electronic warfare system – comprised two drones and a command truck – as a means to locate Ukrainian forces.

This system can pick up more than 2,000 phones within a 3.7-mile range, potentially enabling a whole host of enemy positions to be found.

The Ukrainian forces are believed to be using similar technology. In mid-March US officials told the New York Times that at least one Russian general was killed after a mobile phone call he made was picked up by Ukrainian intelligence.

The presence of these electronic warfare systems has meant that ringing home has become “the digital version of carelessly lighting a cigarette at night”, according to researchers at Copenhagen University.

It even prompted the Ukrainian army to issue advice to its soldiers when they were fighting Russian-backed separatists in the eastern Donbas region, listed below.

1. Leave your own SIM card at home.

2. The best place to get a SIM card is in the zone of conflict itself.

4. Don’t walk away alone, take an armed friend with you to cover you.

5. The best place to make a phone call is in locations with a lot of civilians, preferably in recently liberated towns.

6. Always keep your phone off. Your life depends on it. Grad missiles will hit your whole squad.

7. Do not accept refill codes or cards from the locals. The young woman that brought you a refill card from the neighbouring village may be working for the enemy. Right now FSB and SBU have to process enormous amounts of data to identify the mobile phones of our own people and of the enemy. Do not make their job easier.

8. Watch over your comrades – a friend calls his girlfriend and an hour or so later your position gets shelled or attacked.

9. Remember, the enemy could be listening to your conversations regardless of which SIM card or which telecom operator you are using.

Many of the same systems used to locate phones can be used to intercept communications.

Some have been surprised that Ukraine’s mobile network coverage has remained widespread, enabling Ukrainians and their armed forces to use it if they wish.

But it’s possible the Russians haven’t attacked the telecoms infrastructure so heavily so they can glean intelligence from Ukrainian calls.

It also gives an opportunity for Ukrainian forces to do the same – something likely to be a problem for Russian forces given reports that their encrypted communication system – called ERA – has not been working well, forcing them to use open radio frequencies and civilian phones.

Sam Cranny-Evans from the defence think tank RUSI thinks there are additional explanations for the continued phone coverage in Ukraine.

“Destroying a cell phone network is hard, there are lots of cells everywhere with good coverage. In Mariupol and Iziyum for instance, they are only recently beginning to lose all access to their cell phone networks after a few weeks of fighting, and even then they can gain access in some instances.”

Mr Cranny-Evans also stressed that the Russians could be using the network to operate their drones and that they may not want to use resources to destroy it, as it doesn’t fit with the Russians’ narrative of ‘liberating’ Ukraine.

And while countermeasures can be taken to guard against eavesdropping, it’s not as simple as just turning your phone off.

John Scott Railton, a senior researcher at the University of Toronto’s Citizen Lab, said by accessing a phone’s underlying operating system, an enemy could hack it to appear off when in fact it was on – making it a glowing beacon on the battlefield.

Taking the battery out of the phone is one solution, but this is often difficult to do with modern smartphones.

A further set of vulnerabilities concern not the phones, but the behaviour of the soldiers using them.

If they manage to use their devices without inviting a missile attack, they can become complacent and fail to realise that the enemy is listening to their calls.

Mr Railton said: “The consequences of this aren’t always immediately apparent, which can lead to groups developing security practices that don’t take into account just how much they are monitored.”

And there is one other vulnerability that can often prove fatal – boredom. As the war drags on, this becomes more of a danger.

When researchers interviewed soldiers on the frontline in the Donbas in 2017, they found they typically used their phones despite knowing the dangers. One told researchers:

“Sitting out there in the dugouts, trenches and bunkers for days and even weeks with nothing to do, people start going out of their heads. You need something to take your mind off of things.”

The Data and Forensics team is a multi-skilled unit dedicated to providing transparent journalism from Sky News. We gather, analyse and visualise data to tell data-driven stories. We combine traditional reporting skills with advanced analysis of satellite images, social media and other open source information. Through multimedia storytelling we aim to better explain the world while also showing how our journalism is done.