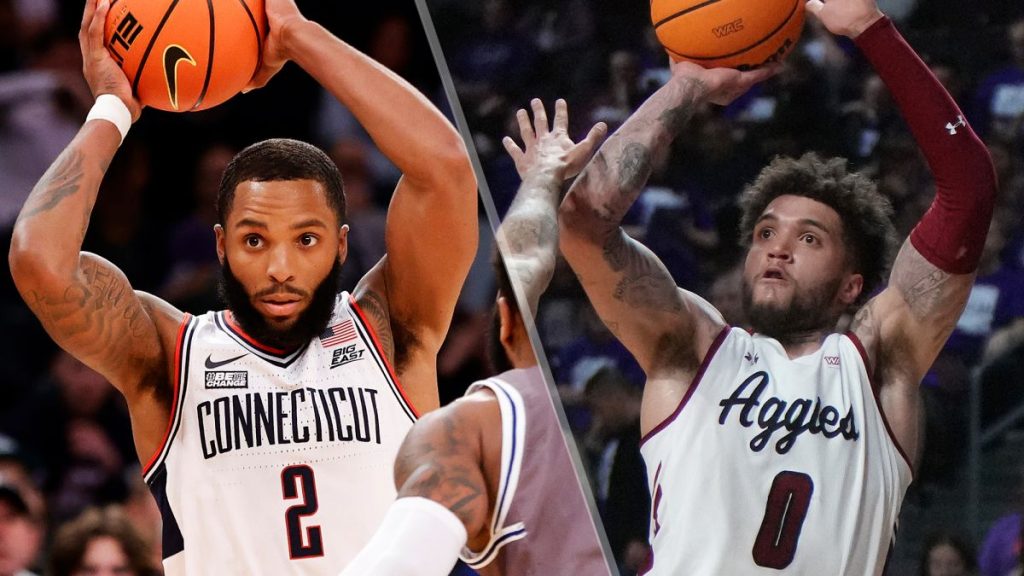 The UConn vs New Mexico State live stream puts the Huskies back in the madness and looking to improve from last year’s first round exit. As for the Aggies, they haven’t been in the tournament in two years and are hoping this March Madness live stream marks their first win in the dance since 1993.

The UConn Huskies (23-9) enter the tournament as the nation’s 21st ranked team and just missed out on improving their national ranking and their 5-seed in the tournament’s West Region.

With just 12 seconds to play in their Big East Tournament semifinal matchup with Villanova, Huskies’ sophomore guard Andre Jackson hit a three to pull his team to within 2 points of tying Nova. However that was the last shot, UConn was able to get off in the final seconds of play. The Huskies fell 63-60.

Now Jackson and senior guard R.J. Cole, the team’s leading scorer will look to bounce back from that loss as well as the disappointment of last year’s early exit. Both Cole and Jackson were a part of that UConn team that shot just 32% from the field and 41% from the free throw line in their first round loss to Maryland a year ago.

New Mexico State (26-6) is a 12-seed after their capturing the WAC Title with a 66-52 win over Abilene Christian. Junior guard Teddy Allen led the Aggies in scoring this season but struggled in the title game shooting just 2-for-8 and notching five of his points at the foul line. He was picked up by senior guard Clayton Henry who led the team with 15 points in the win.

UConn is a 6.5-point favorite against New Mexico State. The over/under is 132. The game will be played at Buffalo, New York’s KeyBank Center.

Hoops fans, if for some reason you’ve had to leave your own “bubble” — or you can’t get truTV where you are for some strange reason — and you can’t watch UConn vs New Mexico State, you’re not out of luck. With a virtual private network, or VPN, you can appear to be surfing the web from your home town (or somewhere that blackouts won’t hit), and access the same streaming services you already paid for.

Not sure which VPN is right for you? We’ve tested many different services and our pick for the best VPN overall is ExpressVPN. ExpressVPN offers superb speeds and excellent customer service, and there’s even a 30-day money-back guarantee if you’re not happy with it.

In the U.S., March Madness is on four networks: CBS, TBS, TNT and truTV.

UConn vs New Mexico State is on TNT  — but the final games will only be on CBS and TBS. You can follow all of those channels with Hulu with Live TV and YouTube TV, but they’re not on our list of the best streaming services. And they cost a lot, at $70 and $65, respectively.

The much more affordable Sling TV Blue ($35 per month) has TBS, TNT and truTV. And then if you add-in Paramount Plus Premium ($9.99 per month) you get CBS there. It all totals to $45 per month, $20 to $25 less than going with one of the other options.

How to watch UConn vs New Mexico State in the UK

Basketball fans across the pond can follow the tournament live on BT Sport, where ESPNHD will feature the games.

Prices differ hugely depending on whether you already have BT TV and a BT broadband subscription. If you have both, you can add the Sports package for £15/month plus a £20 upfront fee, or go for the £40/month Big Sports package which also includes all of the Sky Sports channels, giving you a bunch of other sports on top of March Madness.

Another option for non-BT subscribers is the BT Sport Monthly Pass (£25), which lets you watch via an app for a fixed time and doesn’t require a lengthy subscription.

All sounds great, right? But if you’re not in the U.K., you can still follow the March Madness live streams on a service such as ExpressVPN.

We can’t tell how many of the March Madness games will be airing on TSN or TSN2 but they will have some NCAA games.

UConn vs New Mexico State live stream will NOT be carried by TSN.

Completists without a way to watch the games, though, should — like those in the UK — take a VPN service such as ExpressVPN for a spin.

It appears that (as was the case in previous years) Kayo Sports is your best bet for Aussie streaming services serving up March Madness live streams. But it’s not clear if UConn vs New Mexico State will be on Kayo.

Kayo offers a 14-day free trial for both its Basic and Premium plans, more than enough time to confirm they’re actually showing the games. The Basic package costs $25 per month thereafter.

If Kayo doesn’t have this game, though, we recommend trying out ExpressVPN.