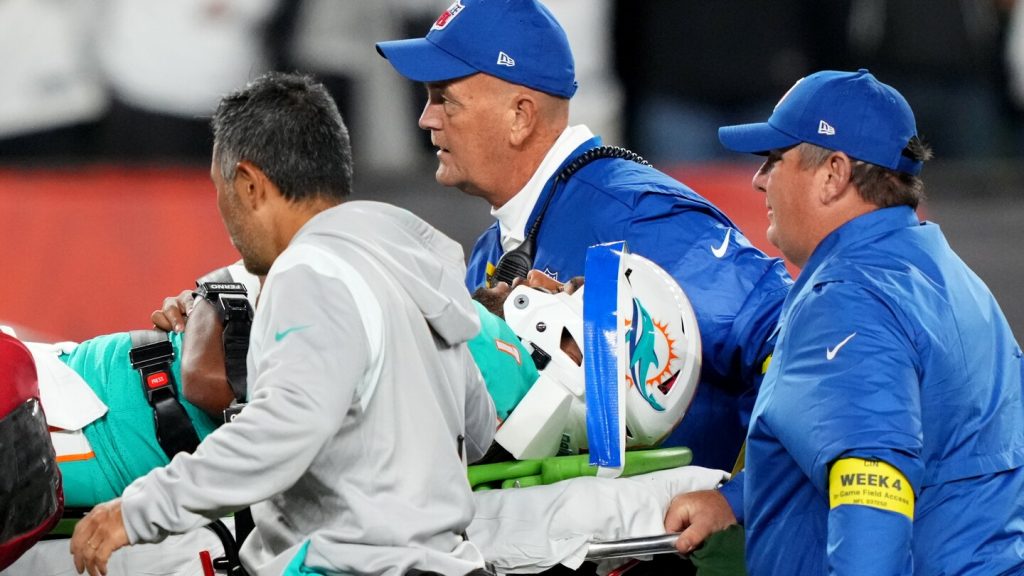 So when Miami Dolphins quarterback Tua Tagovailoa hit the turf Thursday night, suffering what appeared to be his second head injury in five days, it provided the first test of how Amazon, which is paying more than $1 billion to the NFL to broadcast Thursday night games, would handle what has become a difficult balancing act for the league’s media partners.

The broadcast was tasked with deciding quickly how to show replays of the injury and how to contextualize it. Tagovailoa had been injured during the previous week’s game against the Bills, wobbling and falling to the ground after a hard hit. He left that game but returned after the Dolphins reported that he cleared the NFL’s concussion protocols. The NFL Players Association launched a review of how that was handled, and it is ongoing.

After Tagovailoa was injured Thursday, the game returned from a commercial break and showed a slow-motion replay of his fingers bending involuntarily after he impacted the ground. “We’ll show you in a moment how his fingers were stretching out at the end of that play,” play-by-play man Al Michaels said.

Plenty of broadcasts are forced to determine how newsworthy injury replays are, and some decide that they are not. When Alex Smith suffered a gruesome injury to his leg several seasons ago, CBS showed just a single replay. “It’s a philosophy thing,” CBS Vice President of Production Howard Bryant said then. “It’s a horrific injury, and we described it in-depth and documented it, and as a group we felt that was enough.”

Amazon (whose founder, Jeff Bezos, owns The Washington Post) showed another replay of the Tagovailoa injury in the fourth quarter. The multiple replays drew the ire of some fans on social media.

At halftime, the game’s studio crew returned to the topic of Tagovailoa but made little reference to Tagovailoa’s controversial injury and status the previous week. Host Charissa Thompson referred only obliquely to it, saying, “Given everything that we saw last week and now this week, a really tough sight to see.”

But there was no discussion of whether Tagovailoa should have been playing in the first place — not even from former cornerback and Amazon crew member Richard Sherman, who once published an essay on the Players’ Tribune called, “Why I Hate Thursday Night Football,” which cited his concerns about player safety and the short turnaround from Sunday games.

Not everyone was convinced the show should have debated the Dolphins’ decision. Andrew Whitworth, a recently retired offensive lineman, responded to the criticism of one NFL writer on Twitter.

“You just criticized former players,” he wrote. “Who played the game. For spending their time talking about their football brother having movement and gaining consciousness. Bad look is caring about anything other than Tua and his family in this current moment. Policy is for [tomorrow]!”

Chris Nowinski, co-founder and CEO of the Concussion Legacy Foundation, started a program to educate broadcasters on how to talk about concussions with Bob Costas, who has alleged that he was removed from NBC’s Super Bowl coverage because of his commentary about concussions. “The problem is, we all thought Bob Costas was untouchable,” Nowinski said. “When he said one bad word about football, he got thrown out of NFL broadcasts by NBC. And I think that scared everybody. … I watch the games and hear the fear in [announcers’] voices. If they say one bad thing about concussions or bring it up in the wrong place, they’ll lose their jobs.”

During Thursday’s pregame show, Amazon’s crew had a longer discussion of Tagovailoa’s injury the previous week. The network offered a more in-depth report of the injury after the game, too, including a detailed explanation of the league’s concussion protocols from reporter Michael Smith.

Michael Weinstein, a longtime sports executive and producer, including of NFL games, said getting the balance right on live coverage of critical injuries is one of the hardest things a sports telecast has to do. “You’re trying to tell a story of what happened, but also making an instantaneous decision,” he said.

Weinstein thought the context of Tagovailoa’s previous injury was important and needed to be highlighted, but he said it was difficult for broadcasters to speculate about whether a player should or shouldn’t be playing.

“How do you say he shouldn’t be playing if the Dolphins and the doctor green-light him,” he asked. “It’s hard for Al or [color analyst Kirk] Herbstreit or anyone on the broadcast to say that.”

Weinstein added that the way injuries are shown and talked about on TV matters to the NFL. When he used to meet with the league before the season about broadcasting games, executives always highlighted the work the NFL was doing to protect players — especially as awareness around concussions has grown. “The NFL is aware that there is a concern about this on every level,” Weinstein said.

Mark Maske contributed to this report.