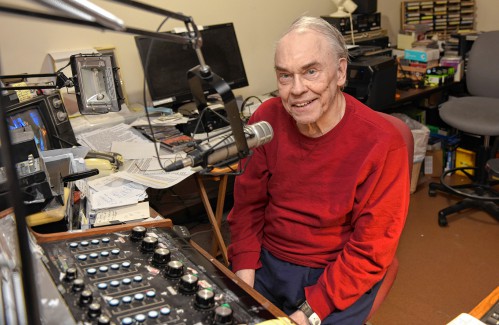 SHELBURNE — The microphone in Phil Drumheller’s home studio will go silent after his morning show Wednesday, capping off a seven-decade broadcasting career that began at Springfield Trade High School.

Phil D, as he is known to area listeners, plans to sign off of the airwaves for the final time at 9 a.m., when ownership and operation of WIZZ radio will transfer to Saga Communications.

“I think it’s time,” the 84-year-old said late Tuesday morning. “I’m in my 70th year of broadcasting. It’s been a worthwhile, happy career.”

Drumheller’s morning show begins at 7 a.m. The dial positions are 1520 AM and 100.5 FM. The coverage area stretches throughout western Massachusetts and northern Connecticut, as well as in the greater Brattleboro, Vermont and Keene, New Hampshire areas.

“It’s going to be interesting,” he said from his South Shelburne Road home, adding that he plans to give shout-outs to his family members for their help with the station and play recordings of positive messages left by listeners over the years.

The already-veteran broadcaster and his late wife, Michele, purchased the license, land and equipment that had been WPOE and WGAM, and established their own radio company, P & M Radio LLC, which started operating on Feb. 1, 2003, after the Federal Communications Commission approved the license transfer. The station plays music spanning a few generations, dating back to the 1930s and ’40s.

Dan Guin, president and general manager of Western Mass Radio Group, a subsidiary of Saga Communications, said that when ownership transfers, WIZZ will maintain its “oldies” format, though perhaps not quite “as oldies.” He mentioned Drumheller used to host WHAI’s Friday night oldies show.

“We hope to have everything move over flawlessly,” Guin said about WIZZ.

Drumheller started his radio career in high school in 1953, working for the school’s FM station “before FM was really popular.” His first commercial radio job was with WKO in Springfield, where he handled the morning and afternoon programs. He was not yet old enough to drive, so he rode his bicycle 20 minutes to get to the station by 7 a.m.

In the early 1960s, he started in the position he held the longest, working at WHYN in Springfield for 20 years until the station was sold. He then joined Ed Skutnik’s WRSI, hitting the streets to sell advertising time to local businesses until the station got on the air, and later WHAI in Greenfield for five to seven years.

Drumheller said he is looking forward to retirement and the liberty it will grant him — he has to wake up at 4 or 4:30 a.m. to make his morning show and has always had to keep his eyes on a clock to make sure he got to bed at a reasonable hour. This means no late-night television or anything like that.

“You can’t really stay up till 1 a.m. if you have to get up at 4. So it was early to bed and early-early to rise,” he said. “But I love it. It was my choosing to go into broadcasting and it was very rewarding in many ways, honestly.”

He was inducted into the Massachusetts Broadcasters Hall of Fame in 2010, though he was unable to attend the ceremony in Quincy due to having had an unexpected heart attack days prior. His son, Paul, accepted the award on his behalf and the elder Drumheller attended the ceremony the following year in an event he admitted was unsatisfying because the industry peers who voted him into the Hall of Fame were not present.

Radio has been there for Drumheller during his darkest hours. His wife, who had owned Sewing Room & Vacuums at 37 Federal St. in Greenfield for 23 years, died of breast cancer in 2006, dealing “a real blow and a real void in my life” three years after WIZZ hit the airwaves. Drumheller said his wife wanted to be home during her final days and died peacefully late at night before a morning show. He acknowledges that though it may seem morbid, it was comforting to have his wife still upstairs until he called an undertaker after his morning show.

“(That show) probably was therapeutic for me,” he said. “That’s the way I looked at it, I guess.”

But WIZZ has always been a family affair, with son Michael building his in-home studio, son Paul handling finances, granddaughter Megan scheduling commercials and reading public service announcements on air, and daughter Laura having previously done some bookkeeping. Michele had also handled the station’s finances at one time.

In a 2010 Greenfield Recorder article about his Massachusetts Broadcasters Hall of Fame induction, Drumheller said music legend Roy Orbison has always been one of his favorites

“He used to come to Mountain Park (on Mount Tom in Holyoke) and I’d introduce him,” he recounted. “One time … my wife and I were at Hampton Beach and saw that he was playing at a place on the boardwalk. It was sold out, but I was able to get a message to Roy and he got us to a table in front of the stage. He remembered me.”

Drumheller also said he has introduced The Beach Boys and Jerry Lee Lewis.

“He refused to go on at Mountain Park if we didn’t provide him with a quart of vodka,” Drumheller recalled in 2010 about Lewis. “But boy, when he performed, he did it with his entire body. He was playing the piano with his toes, his feet, his elbows. He put on a show and no one could tell he’d been drinking as much as he had.”

“(Presley) could really rock,” Drumheller said, “and he had some slow, easy-going ballads.”