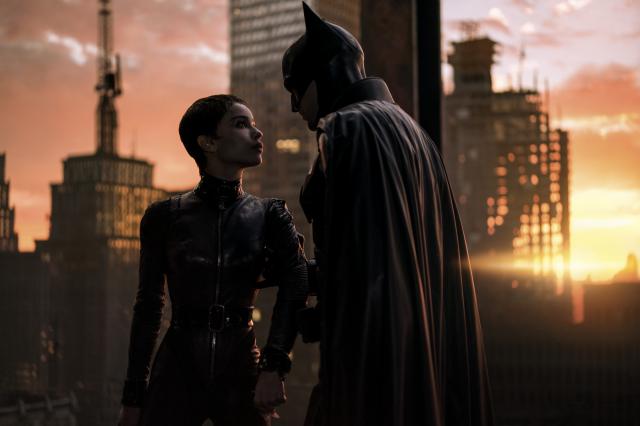 NEW YORK — In its second weekend of release, Warner Bros.’ “The Batman” easily remained the No. 1 movie in North American theaters with $66 million in ticket sales, according to studio estimates Sunday, while a live BTS concert broadcast was one-day-only blockbuster.

“The Batman,” Warner Bros.’ first exclusively theatrical release in more than a year after experimenting with simultaneous streaming releases through 2021, is expected to have much of March to itself at theaters. No new wide releases opened over the weekend and “The Batman” should remain atop the box office for at least another week. Partly because theaters were so dependent on “The Batman” this month, AMC Entertainment and some other chains introduced ticket prices that were $1 to $1.50 higher for the film’s first eight days of release.

Also packing theaters, albeit for a shorter window, was “BTS Permission to Dance on Stage: Seoul.” The live broadcast Saturday of the band’s first stage concert in South Korea sine 2019 grossed $6.8 million in 797 North American theaters. Globally, it made $32.6 million — a testament to the immense popularity of the South Korean boy band. Tickets to the event screenings went for as much as $35.

One promising sign for Hollywood and exhibitors: Movies are holding well. During much of 2021 amid in the ups and down of the pandemic, most films struggled to remain sizable draws after their first or second week in theaters. This weekend, not only did “The Batman” hold well, so did the weekend’s other top films.

“Uncharted,” the action-adventure starring Tom Holland and Mark Wahlberg, declined only 17% in its fourth week of release. The videogame adaptation, from Sony Pictures, came in second with $9.3 million. It grossed $113.4 million domestically.

MGM’s “Dog,” starring Channing Tatum, has also had staying power. In its fourth week of release, it dipped only 13% with $5.3 million in ticket sales. The modestly budgeted film has made $47.8 million.

“These are unusually small weekend-over-weekend drops,” said Dergarabedian, who noted the dip for “The Batman” was even less (41%) if you discounted the film’s early presales ahead of opening weekend. “The road to recovery is in full swing, it’s just taking a while.”

The paucity of competition for “The Batman” was partly due to other studios staying away from one of the year’s more anticipated films. But it was also reflective of an early 2022 trend and changes accelerated by the pandemic. With more major movies going straight to streaming, theatrical offerings are slimmer.

The Walt Disney Co. opted to debut the Pixar film “Turning Red” on Disney+, as it did for the previous two Pixar releases. Before the pandemic, Pixar releases were some of Hollywood’s most reliable ticket-sellers. Domee Shi’s “Turning Red,” the first Pixar film directly solely by a woman, about a 13-year-old Asian Canadian girl who turns into a giant red panda when she feels strong emotions, played in three theaters domestically (Disney didn’t provide sales figures) and opened theatrically in 12 international markets where Disney+ isn’t available. It grossed $3.8 million in those territories.

The release schedule, said David A. Gross, who runs the movie consultancy Franchise Entertainment, remains thin. He counted 16 wide releases in January and February, while there would typically be 22 to 25. The National Association of Theatre Owners has called lack of movies “a critical issue” for theaters.

“But the April and May titles are strong and they are more consistent from week to week, which is what we’ve been missing,” wrote Gross in a newsletter Sunday. He expects moviegoing to continue to strengthen in the spring and summer. If sales can reach 80% of 2019 grosses, he says, that would be a very good result for the year.

Estimated ticket sales for Friday through Sunday at U.S. and Canadian theaters, according to Comscore. Final domestic figures will be released Monday.