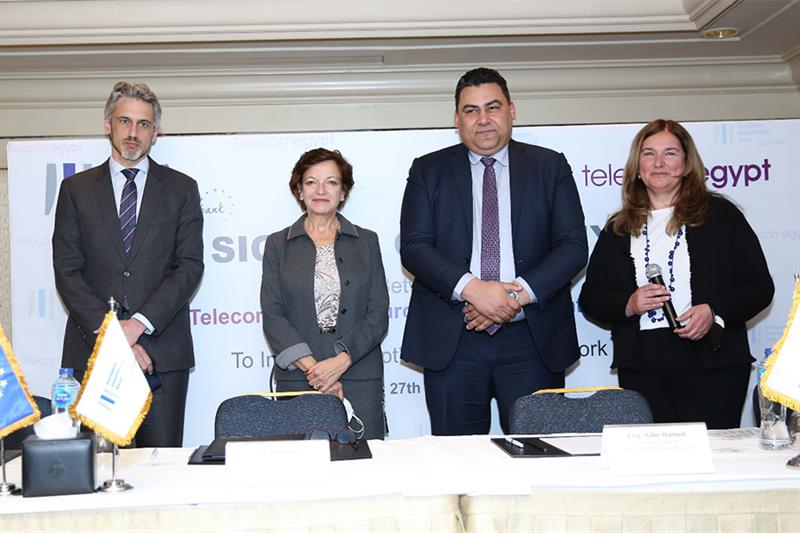 The loan will be used to improve TE’s mobile network coverage by deploying around 2,000 new mobile sites and installing additional capacity layers to its existing portfolio of cell towers, according to a TE statement.

The EIB said the loan is the largest the bank has ever provided for a mobile network in Africa. The work is expected to strengthen the network across Egypt, including in less densely populated areas, and enhance competition and the affordability of services.

State-owned TE is the first integrated telecom operator in the Egyptian market, providing advanced technology and reliable infrastructure solutions, as well as the widest network of submarine cables.

Besides its mobile operation “WE”, the company owns 45 percent of Vodafone Egypt. ET shares and GDRs are traded on the Egyptian Exchange and the London Stock Exchange.

“The EIB identifies the digital transformation as a catalyser for innovation, employment, and sustainable economic growth. We are pleased to partner with TE — a dynamic group engaged in its ambitious network expansion programme — to offer a modern and broader access to connectivity throughout Egypt,” Palanza added.

Speaking to Ahram Online, Palanza said the EIB’s operations in developing countries received a boost since the start of 2022 through EIB Global — a new branch with a mission of providing finances for development and partnerships outside of the EU amid the ongoing global challenges.

She stressed that Egypt is a key country for the EIB’s work in the EU’s Neighbourhood Countries, with over 40 years of operations in the Egyptian market and around 120 EIB-financed projects.

On the loan agreement, Palanza said the EIB has also allocated €41 billion for projects that focus on digital transformation in the EU and its partner countries, including Egypt.

She stressed that initiatives such as Egypt’s Descent Life are very important to improve the livelihood of poorer people, and that digitisation plays an important part in that.

Descent Life is a sustainable development initiative launched by President Abdel-Fattah Al-Sisi, and targets the poorest, least advantaged villages across Egypt by implementing projects that improve their living conditions.

Initiatives like Decent Life, Palanza said, and new investments in telecommunications, urban transport renewable energy, water and sanitation, are being implemented across Egypt to foster inclusive and sustainable growth.

“The EIB hopes to continue supporting Egypt in its ambitious plans and projects across many sectors,” Palanza said, adding that Egypt has taken a courageous move to phase out subsidies while maintaining social protection programmes for the poorer segments of society.

“Subsidies prevent putting more money into new investments, and that is why financial institutions like the EIB come to aid Egypt in implementing new investments,” Palanza said.

Deputy head of the EU delegation in Egypt Tobias Krause said that digital transformation is a key pillar of the current ambitious phase of cooperation with Egypt.

“The EU aims to support the Egyptian government’s efforts to secure resilient and affordable access to universal connectivity to the benefit of Egyptian citizens. This project shows the commitment of our partners in the EIB to support crucial inclusive digital infrastructure planning in Egypt,” he said.

“We will continue to work hand in hand with our member states and European financial institutions as Team Europe to support Egypt’s human-centric digital transition and to foster a sustainable, connected, and inclusive economy and society,” he asserted.