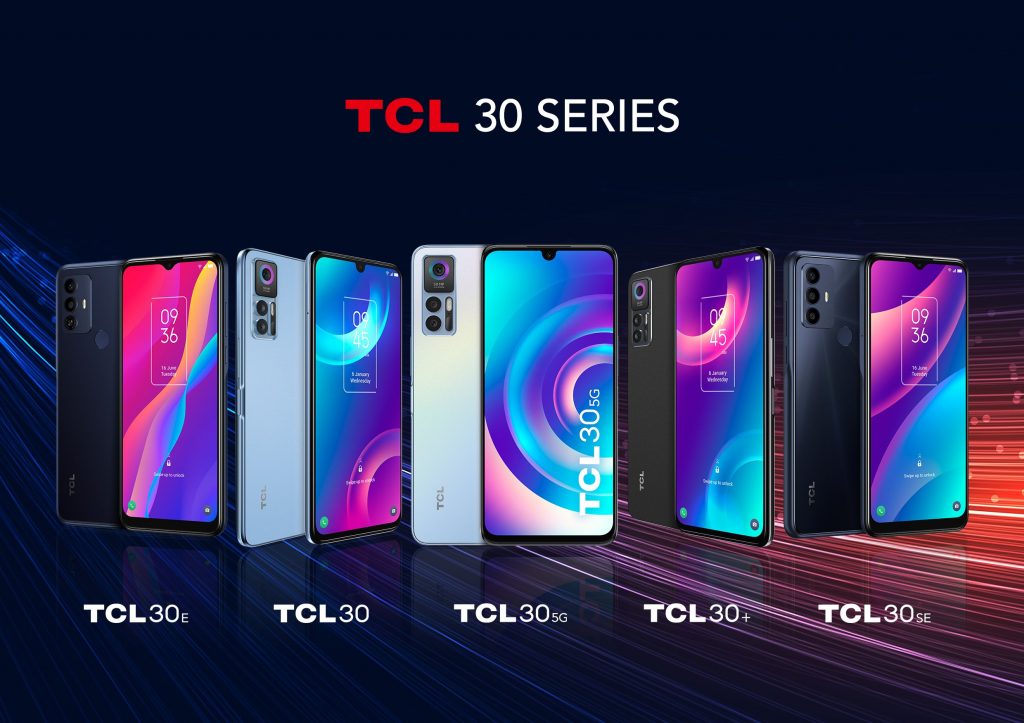 TCL kickstarted this year by announcing two new budget Android smartphones at CES 2022 — the 30 V 5G and the 30 XE 5G. Now, at MWC 2022, the company is further expanding the TCL 30 series with the addition of five new phones: the TCL 30 5G, 30+, 30, 30 SE, and 30 E. All these are budget- to mid-range offerings that offer a good value. The devices are all launching in Europe first, but some of them might eventually make their way to the US. Additionally, the company also launched three new tablets, with one of them featuring an e-ink-like display.

The TCL 30 5G, 30+, and 30 feature similar internals barring a few key differences. As the naming scheme makes it clear, the TCL 30 5G is the only one from the trio to offer 5G connectivity.

The phones feature a large 6.7-inch FHD+ AMOLED display and a triple-camera setup consisting of a 50MP f/1,8 primary shooter, a 2MP depth sensor, and a 2MP macro. At the front, there’s a 13MP f/2.3 selfie shooter on the 30+ and 30 5G, with the regular model sporting an 8MP shooter. They are limited to recording videos in Full HD resolution at 30fps. A fingerprint sensor is integrated into the power button of the phones, and they also retain the 3.5mm headphone jack.

While the MediaTek Helio G37 chipset powers the TCL 30 and 30+, the 5G variant sports the Dimensity 700 chip. All models pack 4GB RAM and a hybrid microSD card slot, with the TCL 30 featuring 64GB built-in storage and the other two devices topping out at 128GB storage. The phones are powered by a 5010mAh battery and support up to 18W fast charging speed. As for software, they run on Android 12 with TCL UI 4.0 on top of it.

Oddly enough, the TCL 30 5G misses out on stereo speakers that are found on the other two models. The pricing and availability of the three phones can be found below:

The 30SE and 30E are budget-oriented devices packing a 6.52-inch 720p+ LCD panel and a 5,000mAh battery. These phones also feature a 50MP primary shooter and a 2MP depth sensor, with the 30 SE packing a 2MP macro sensor, too. They are powered by the MediaTek Helio G25 chip and pack up to 4GB RAM and 128GB storage.

The highlight of TCL’s tablet lineup is undoubtedly the NXTPAPER MAX 10, which comes just a month after the company unveiled the NXTPAPER 10s at CES 2022. It sports a 10.36-inch e-ink-like display with an anti-glare glass on top to give the look and feel of paper. Internally, it sports a MediaTek MT8788 chipset and packs 4GB RAM along with 64GB storage, which can be further expanded using a microSD card. There’s a 13MP shooter at the rear and an 8MP front-facing camera. Powering the device is an 8,000mAh battery that can be topped at a maximum speed of 18W. TCL will offer the tablet in both Wi-Fi and 4G configurations,

The Tab 10S 5G is the only device in the lineup to feature 5G connectivity and run Android 12 out of the box. It also packs a 10.1-inch FHD+ IPS panel, with an octa-core MediaTek M8771 chip running inside it. This is paired with 4GB RAM, 64GB storage, and a microSD card slot. A beefy 8,000mAh battery powers the tablet and promises all-day battery life.

How to use Stack to scan and organize your documents

A Google app that transforms papers to PDFs in a snap

Rajesh Pandey started following the tech field right around the time Android devices were going mainstream. He closely follows the latest development in the world of smartphones and what the tech giants are up to. He loves to tinker around with the latest gadgets to see what they are capable of.