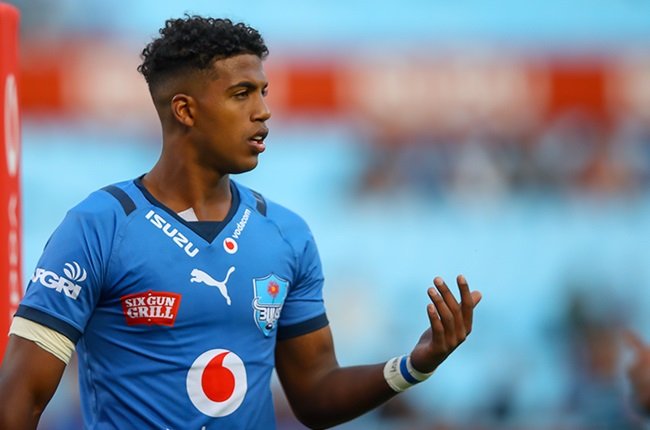 Teenaged Springbok and Bulls star Canan Moodie suffered the first significant setback of his fledgling career after Jake White, his franchise coach, confirmed on Friday that he’ll be out for two months with a hamstring strain.

The 19-year-old flyer sustained the injury during the first half of last weekend’s victory over Connacht at Loftus Versfeld.

While it was expected Moodie wouldn’t take part in the Bulls’ three-match URC trip, which commences on Saturday night against Glasgow, the newfound timeframe on his recovery means he’s also out of the Springboks’ year-end tour next month.

“Canan is out for about 8 weeks,” White said on Friday.”He won’t play any part in our last few games in the URC before the November break and probably won’t be available to tour with the Springboks. Hopefully he will be back at the end of November to start the second part of the URC with us.”

Yet the news was better on Moodie’s fellow Bok teammate and winger Sbu Nkosi, who will be flying out to Europe at the start of next week once he’s completed his mandatory return-to-play protocol for concussion.

Hooker Johan Grobbelaar, hugely influential for his team before injuring his ankle against Connacht, looks set to spend a significant time on the sidelines after going under the knife to repair the damage.

Meanwhile, White – a vocal detractors of 4G pitches, which is essentially synthetic turf – said his decision to leave marquee pivot Johan Goosen out of the entire match squad was based purely out of concern what the surface could do to the flyhalf’s knees.

“I’m not going to risk him on a 4G pitch. The reality is that no tier 1 Test match is played on that kind of surface for a reason,” said the Bulls mentor.

“He got injured on that kind of surface last year and I just feel from a player welfare point of view and the fact that he’s come back from a horrific injury that took 11 months to rehabilitate, it’s not worth it.

“I have confidence in Chris and Morne. They know how we want to play.”

Interestingly, White didn’t bother with getting much input from Goosen.

“It might be a mental thing, but I don’t think so. I’m not asking him whether he thinks it’s okay, I’m taking a decision on my own,” he said.

“I really don’t want to risk a guy on that pitch when I know that’s where he got injured and if you look at history, those pitches are known for injuries of this nature.”

Avoiding that type of anxiety is understandable given that the team once again had to contend with less than ideal travel arrangements, even though the URC’s new partnership with Qatar Airways was supposed to alleviate some of the hitches.

White reiterated though the Bulls were not going to use that as an excuse.

“No, the logistics haven’t been better. It took us 24 hours to get here. We flew Doha, a connection to the UK, then Edinburgh and then we needed to catch a bus to Glasgow,” he said.

“Ideally, that’s not the way you’d put a tour together. We had to leave on a Monday, because the chances of missing a flight on a Wednesday means you won’t make your fixture on the weekend. It’s not ideal, but we’re not going to use it as an excuse.

“If it was a team we’d want to get the best out of, we’d have flown on a Wednesday directly and get here straight. The Lions were in transit for 27 hours and won two games, it is proved you can travel poorly and still win games.”