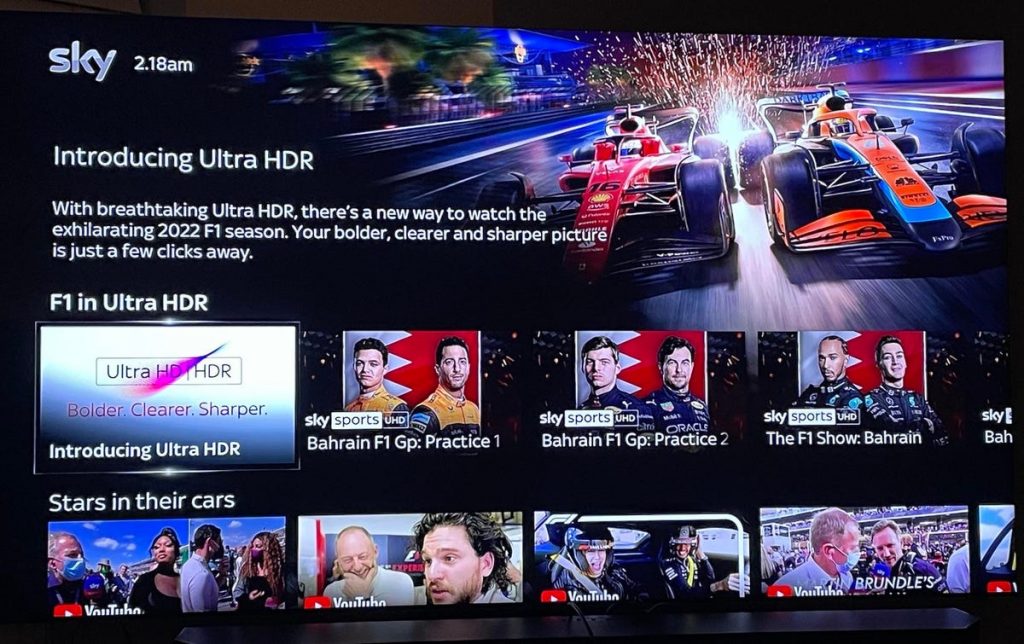 Having already whipped up a storm of controversy during pre-season car testing, the new Formula 1 season is set to start in earnest this Friday. And for viewers in the UK, at least, it seems as if the excitement surrounding the season’s opening race will be even greater than usual thanks to British satellite broadcaster Sky looking as if it’s going to be broadcasting the whole thing, including Friday and Saturday’s practice and qualifying sessions, in high dynamic range (HDR) video.

Sky screened most of the 2021 F1 season live in 4K Ultra HD resolution, but it now looks as if it’s set to make good on promises it made in the latter stages of 2021 that it would add HDR to its 4K coverage for the 2022 season.

While Sky has yet to put out any formal press confirmation that its F1 coverage will be adding the lovely extra light range associated with HDR video (yes, all those newly designed cars will look even shinier), I’ve been sent evidence via Twitter of Sky’s customer services department answering in the affirmative a question about whether the broadcaster’s upcoming F1 coverage will be in HDR.

This is not in itself definitive proof that the 4K HDR coverage is going to go live this weekend, it should be said; the customer services departments of too many tech companies to mention have consistently proved over the years that they can’t always be relied on to impart accurate information. In this case, though, the customer service comment appears to be backed up by the actual menus of Sky’s electronic programme guide.

It should be said that clicking on the Bahrain Practice session UHD link that’s the second item along the F1 in Ultra HDR shelf brings up a header page that only carries a UHD confirmation tab among the programme details; there’s no HDR confirmation tab. Even though Sky does put an HDR tab on the header pages of its HDR-enabled on-demand (rather than live) content.

With this in mind I have put a question in with Sky’s technical people (rather than its customer support lines!) to get absolute confirmation that its promised 4K HDR F1 coverage will indeed be starting with the first race of the season. I will update this story with what they say, and provide an update on my twitter account too.

Fingers crossed Sky’s apparent HDR promises really do come true on Friday, as the application of good quality HDR to F1 has the potential to look truly spectacular.