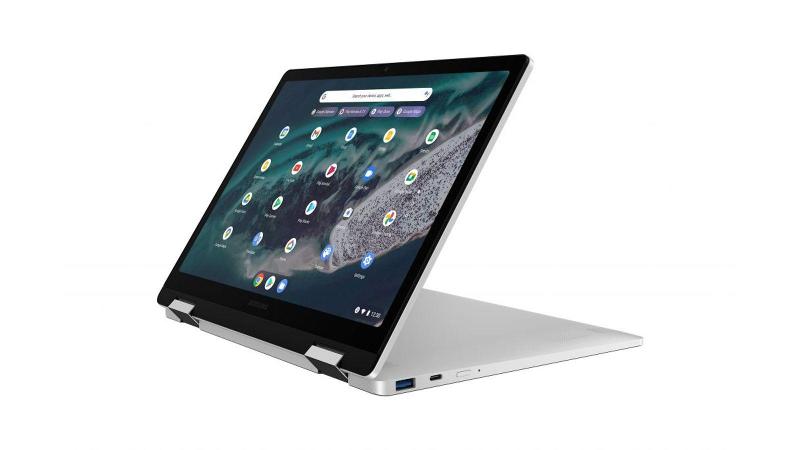 Samsung used last month’s MWC to reveal new Windows 11 laptops, but it hasn’t forgotten about Chrome OS. The new Galaxy Chromebook 2 360 might be targeted towards students and teachers, but it’s a realistic option for anyone looking for a new cheap laptop.

As the name suggests, this is a convertible device with a 360-degree display. It’s a common feature on modern laptops, but its success will be defined by the strength of the hinge. The screen itself is a 12.4in LED panel, at a resolution of 2560×1600. It sounds decent on paper, although the advertised 340 nits of max brightness will make outdoor visibility difficult.

Samsung has opted for Intel’s budget Celeron N4500 chip under the hood found in many budget laptops, alongside 4GB of RAM and UHD integrated graphics. This should cover the basics of performance, but don’t expect great multitasking or any demanding apps to run smoothly.

Storage is also limited to just 64- or 128GB of the slower eMMC standard, with no option for an SSD. With several gigabytes devoted to system files, most people should avoid the entry-level configurations. Chrome OS being mostly web-based will help, but not enough to justify 64GB for many consumers.

The front-facing camera supports 720p video, which should be fine for occasional video calls, alongside dual stereo speakers. An 8Mp rear sensor will be useful for reference purposes and document scanning, but probably not much more.

You do get an impressive range of ports, with 2x USB-C joined by USB-A, microSD, nano security slot and optional nano-SIM slot. The latter allows you to add 4G connectivity to the existing Wi-Fi 6 and Bluetooth 5.1 support.

Either of the USB-C ports can be used for charging with the 45W adapter included in the box. But Samsung makes no claims regarding how fast it’ll charge the device, or how long the 45.5Wh battery will last.

The company has increased the size of the Chromebook 2 360’s keys and trackpad, while the keyboard itself is now spill-resistant. However, it’s only available in one colour option – silver.

The Galaxy Chromebook 2 360 will be available in the UK from 15 April, starting at £419 for the Wi-Fi version. Adding 4G support will cost you £499, with the device set to be sold on the Samsung website and via ‘major UK retailers’.

US pricing and availability is yet to be revealed, although there is often regional variation when it comes to Samsung laptops. Still, it looks like a contender for our best Chromebook chart.