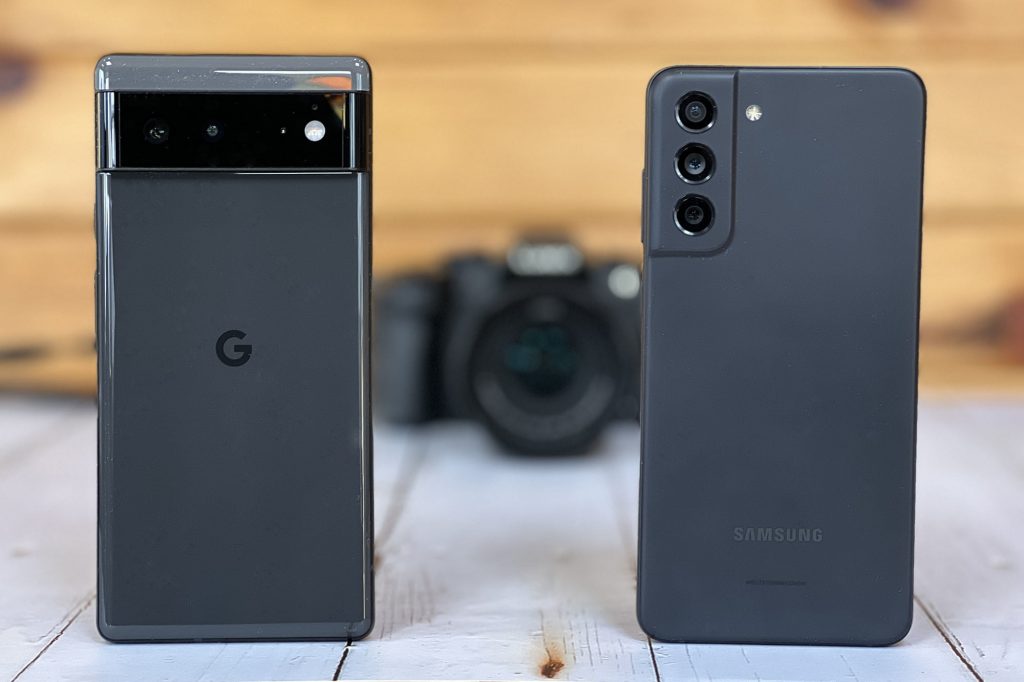 Over the last few years, midrange smartphone photography has taken huge leaps in quality. As long as your lighting is good and your subjects aren’t moving, you could definitely snap some Instagram-worthy shots. Two solid contenders in this category are the Google Pixel 6, and the Samsung Galaxy S21 FE. Both of these phones sit at around the $600 price point, and both will give you some really outstanding results.

Naturally, I decided to pit these phones against each other in a camera shootout. Both bring really solid cameras to the table, so I wanted to see where the strengths and weaknesses were by looking at a number of different categories and lighting conditions. Here’s what I found.

On the front of the Google Pixel 6, there’s a single 8MP f/2.0 sensor. Meanwhile, the front of the S21 FE has a 32MP f/2.2 sensor. All the cameras are capable of shooting in 4K at 60 frames per second (fps), except the selfie camera on the Pixel 6, which is limited to 1080p at 30 fps. Once you wrap your head around those numbers, go ahead and jump into the various scenarios I tested.

During the day, in good light, both cameras perform admirably — as they should. These days it’s hard to find a phone that doesn’t take good photos during the day. So I need to get a bit more nitpicky. One area where some phones struggle is in keeping color consistent between lenses. In this case, both phones perform quite well when switching between the ultrawide and main cameras, but both also get a little pale and washed out when you zoom in. That’s not uncommon, but what makes this odd is the Google Pixel 6 doesn’t have a zoom lens; the 2X zoom offered is a digital crop. Logic would seem to dictate that the color should be the same coming from the same sensor, but that’s not the case.

Speaking of zoom, this is one area where there is a clear differentiation. The Pixel 6 has no optical zoom while the Galaxy S21 FE has a 3X optical zoom lens, so I have to give the nod to Samsung in this case. Google offers you 0.7x, 1x, and 2x. Samsung offers you 0.5x, 1x, and 3x. As long as you stay within those parameters, you’re fine. When you zoom beyond that, Samsung still does a better job, but neither one is particularly great.

The one exception to that comes in the form of moon shots taken with the Galaxy S21 FE. It’s safe to say that Samsung has photographing the moon down pat. I’m still not positive what black magic goes into the camera to allow it to take such gorgeous handheld shots of the moon, but suffice it to say, it’s excellent. But it’s a bit of a party trick because, let’s face it, how many photos of the moon do you need to take?

Both phones perform pretty well when you move inside and the lighting gets more questionable. What you’re looking for inside is natural bokeh from your close-ups, color reproduction, and white balance. All of these factors are important under artificial light. You’re also looking for blown-out highlights when those lights fall into your frame.

In this scenario, the Google Pixel 6 slightly edges out the Samsung in terms of color accuracy and smoothing out those highlights and lens flare when you accidentally catch light in the background. Samsung is typically famous for oversaturating its photos, and that doesn’t seem to be happening as much with the S21 FE 5G. We can all hope Samsung might be easing off the gas pedal in that area. In general, both phones performed fairly well, but the Pixel has a slight edge.

As I noted in my review of the Samsung Galaxy S21 FE, Samsung did some fine work here when it comes to portrait mode. On the front and the back, Samsung only just barely nips some stray strands of hair in portrait mode. Meanwhile, Google’s portrait mode blurred the back half of my head and jacket. Both phones did well picking up the background inside the crook of my arm when I held it up, but Google still had trouble figuring out where my jacket ended.

On the flip side, Samsung forces a much closer crop than Google for portrait mode, and I think this mostly works well. There’s little background to get confused over, while Google’s wider shot keeps the close ground in focus and fades as it goes back. Overall, I prefer Samsung’s take, even if the area around the jowls was a bit sharper than it should have been.

Sometimes you just want to take a close-up. Normally, we reviewers like to focus on flowers to the point of it being a cliché. But in the middle of winter, that tends to not work out so well. Speaking of not working out so well, neither phone performed particularly great for this test. The Pixel 6 kept a greater amount of detail overall and had less trouble finding focus when snapping the macro shot, but the S21 FE has a greater depth of field, allowing me to keep a bigger part of the subject in focus. Overall, I preferred the output of the Pixel 6.

Both phones perform well at night, but the Pixel does a much better job at preserving details and reducing blown-out highlights. This is really the only area where one phone performs demonstrably better than the other. Honestly, it’s not that close. The good news is that Samsung’s 3X optical zoom performs quite well at night, which is often a problem, even in flagship phones.

In terms of nighttime video performance, neither phone does very well. The Samsung Galaxy S21 FE has a lot of trouble with stabilization and focus at night. The Pixel 6 struggles mightily with grainy footage across the board. If you plan to film at night, you’ll need a better phone (or a DSLR in general). If you’re shooting stills, take the Pixel 6.

While both phones perform very well in good lighting conditions, The nod here goes to the Pixel 6 mainly because of the stabilization of the footage. Whether you’re walking with the main shooter on the back or the front-facing camera, Google’s stabilization makes it look like your phone is on a track. I was surprised by this since the Galaxy S21 Ultra had rock-solid stabilization, so I’d hoped that trend would continue.

Another area where Google shines is in the transition from a lighted area to a darker area and vice versa. It’s a much smoother transition and makes for an overall better-quality video. If you’re walking and talking to the camera, or if you’re looking for a walking shot from the main camera, the Pixel does a much better job.

The Google Pixel 6 takes the most categories here, but don’t count the Samsung Galaxy S21 FE out entirely. Frankly, Samsung wins out in one of the most important categories (in my world), which is zoom. Put simply, if you want to zoom in with a Pixel, it’ll cost you an extra three benjamins. It’s hard to overstate how important that can be depending on your use case. It’s especially noteworthy that Samsung steals Google’s lunch money in that category, while in most of the categories Google takes, the difference is much more narrow.

Meanwhile, Google maintains its crown in terms of point-and-shoot photography. Whether you’re inside, outside, or in the dark, this is a great camera to have in your pocket. At the price point, you can’t complain. As for a solid recommendation of one phone over the other, it’s easy to say it depends on your use case, but the Google Pixel 6 is my pick for most categories.