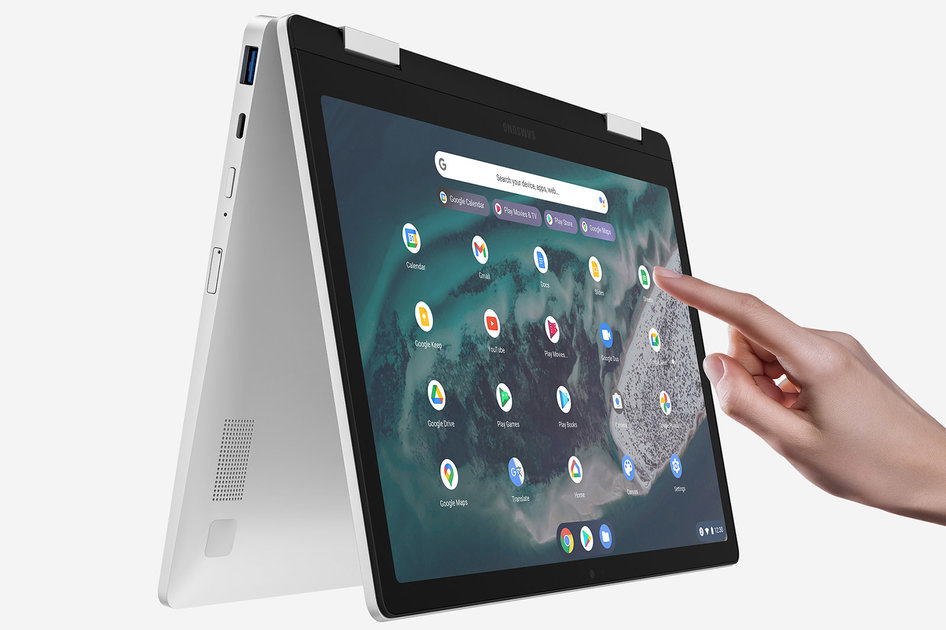 (Pocket-lint) – After a hiatus in the laptops market in many world markets, Samsung is back to business and attacking in many key product areas. That includes education, where its latest Galaxy Chromebook 2 360 is aiming to have the greatest impact.

As that all-important ‘360’ on the end asserts, this Chromebook has a versatile 360-degree hinge mechanism, meaning you can use it in laptop, upright ‘tent’ or ‘stand’ positions, or laid flat more like a tablet device if you would prefer.

Chromebook products have progressed so much over the years that specification is less a concern than it was back at their beginnings. The Chromebook 2 360 delivers a decent 12.4-inch LCD screen, complete with 2560 x 1600 resolution (WQXGA), and maximum brightness of 340 nits (not exactly eye-searing, but good enough to combat some sunlight).

In terms of power you can’t expect a lot, though, with an Intel Celeron N4500 under the hood, paired with 4GB RAM and Intel UHD graphics. Thankfully Chrome OS isn’t a taxing operating system, and without the ability to run ‘heavy’ Windows-style apps – it’s all about Android apps and Chrome Web Store downloads – that should be fine for running individual tasks one at a time.

Interestingly this Chromebook comes with the option to be used on the go, with a 4G/LTE modem option available beyond the basic Wi-Fi only model. And Samsung isn’t charging a huge fee to upgrade to that connected model either, as you can see from the pricing below.

The Samsung Galaxy Chromebook 2 360 will be available in the UK from 15 April, priced £419 for the Wi-Fi only model (with 64GTB storage), or £499 for the 4G/LTE model (with 128GB storage). So while its pitched at the education sector, this kind of pricing will hold wider appeal for those seeking a simple word processing and document browsing machine with added flexibility from that hinge. Good stuff.