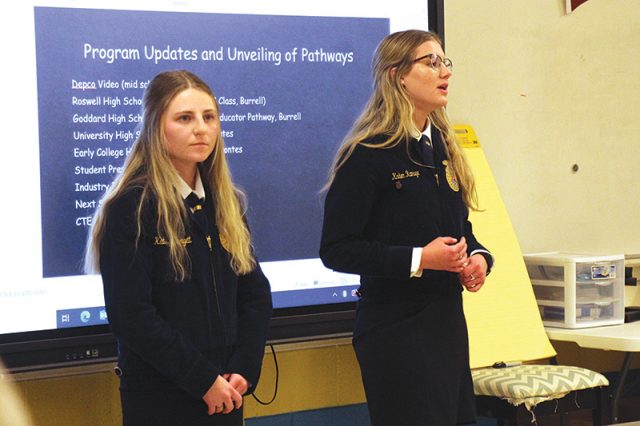 The district will unveil all-new CTE career pathways for its high schools at next month’s Board of Education meeting, but it is now forming community advisory boards to get input from those who could benefit from the programs.

“We want to establish a productive working relationship between RISD and regional industry. We want to connect students to opportunities,” Jennifer Cole, assistant superintendent of curriculum and instruction, said.

The district is forming an overall community advisory board encompassing a variety of career clusters, and teachers will be able to also create advisory boards related to their areas of education.

Students would also benefit from having professionals be guest speakers or offer field trips for students, Cole said.

In return, the district will be able to produce students who can enter the workforce with the skills employers need, said Chuck Boyd, senior school improvement leadership coach with Southern Regional Education Board.

SREB is an educational consultant that works with schools in 16 states. RISD has contracted with them for several years, Cole said.

“It’s almost imperative now that the business and industry community come to the school systems and really tell us what you need,” Boyd said.

“What’s going to be important is that we take that skillset that you need and make sure we weave that into the scope and sequence of our CTE programming,” he said.

The New Mexico Public Education Department has identified 16 career clusters, or groups of occupations that have similar knowledge and skill requirements. Those clusters are then broken down into career pathways, or programs of study that teach the core skills and knowledge needed for an occupation.

The overhaul of the district’s CTE program began in spring of 2021, Cole said, with RISD administrators touring local aviation, aerospace and health care industries and meeting with people in those industries to learn what students need to know to be successful in those careers, Cole said.

The changes in the CTE program are exciting to see, RHS Assistant Principal Lucie Hall said. She said in her 10 years with the district, it’s the first time the district is listening to what the business community needs.

Some community partnerships are already making a difference for students, she said. Fulkerson Services and Rhoads Co. are training eight students outside of regular classes.

“We have students coming to school at 7 o’clock in the morning, meeting with people from Fulkerson and Rhoads, and then coming in after school to work on the skills that they’re learning so they can go into construction,” she said.

“In case you haven’t worked with teenagers in a while, getting them to the building at 7 a.m., that is motivation,” she said.

Roswell High has also started pathways in informatics and culinary arts and has had a strong agricultural program, Hall said.

Several RHS students who are also members of the National FFA Organization spoke of their experiences in the agriculture program.

Kaden Ramage said she and fellow senior Kathryn Surgett are the first RHS students to complete a career pathway and will have a special emblem to wear on their graduation gowns for doing so. Both have been working through the animal science pathway.

They learned about large and small animal skeletal systems and organs, dissected animals and learned about animal behavior and handling animals, Surgett said.

“By the end of this semester, we get certified to work in a vet’s office as an assistant, so that’s super awesome and a great opportunity,” Ramage said.

They also said more opportunity is needed for students in the community.

“We need more hands-on work and we need more experiences out there to make us grow as people and to make Roswell a better community,” Surgett said.

Juniors and FFA members Braedon Greathouse and Myca Patterson also spoke about the agriculture program. Greathouse said the welding program contains an academic aspect in which students spend the first 20 minutes of class on an assignment or a quiz. The welding class is making a batting cage for the RHS baseball team.

Patterson said he’s been in both animal science and the agriculture mechanics programs and he’s already been able to apply the lessons in his life outside school.

Junior Analiese Casey and senior Patrick Harris are students in the RHS culinary program. Casey said even though she began baking at a young age with her grandmother, she has learned much from the program.

“It’s taught me how to work with a team in the kitchen, how to stay organized in a kitchen,” she said.

She said she’s been looking at college culinary programs to enroll in after high school.

Harris said he joined the program because the teacher, Jordan Valverde, is a family friend, but he also learned about teamwork.

“CTE in general is a breath of fresh air for some of these kids,” Valverde said.

She told about one student who said she hated school but learned she was good at — and enjoyed — making cakes.

“First time trying and she was amazing and she loves it, so now she has an idea of what she wants to do with her life after high school. It is actually changing a lot of kids’ lives,” she said.

Automotive teacher David Peek echoed the need for more opportunities for students to learn from those working in their fields.

The auto program teaches the basics of auto mechanics, including having first-year students build three combustion engines and learning maintenance on their own or their family cars, he said.

Third-year auto students can take dual credit classes through Eastern New Mexico University-Roswell and earn certificates in different areas of auto mechanics, such as brakes and hydraulics. In their fourth year, they shadow mechanics at local auto dealerships.

But the auto industry is turning more toward hybrid and electric vehicles, as well as vehicles that can drive themselves, and students need to know how those vehicles work as well, he said.

“These kids need to have this knowledge. I can’t give it to them, and that’s why I’m happy to see you people here today,” he said.