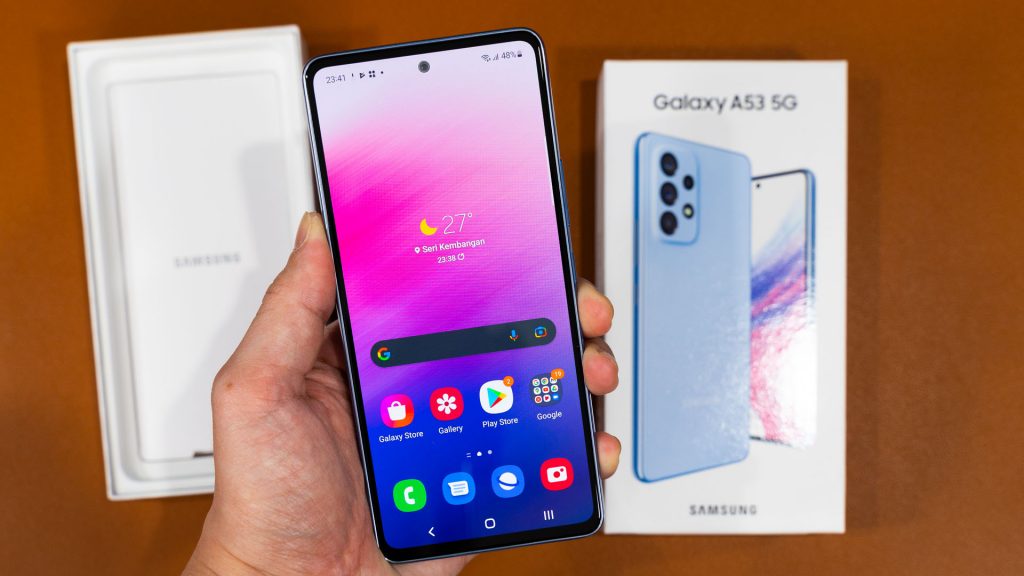 Samsung’s Galaxy A series smartphones have been gaining traction after years of successful launches. The A-series offers a great value proposition for those who want an excellent smartphone experience without breaking the bank. With the launch of the new Galaxy A73, A53 and A33, I can’t help but wonder what really has changed since the last refresh cycle. So, I spent some time testing a Samsung Galaxy A53 5G to see who is this for.

Samsung is adopting a clean and minimalist design for the Galaxy A series. Arguably, some might say Samsung is reusing the same concept, but why change something that’s working well.

While this colour scheme is still called Awesome Blue, it is less saturated than last year’s Galaxy A-Series. I particularly like how the back panel texture is smoother this time. Frankly speaking, a plastic back felt more secure to hold in the hand than glass.

The camera bump curves and rises gradually from the back panel.

As usual, the front is consist of a piece of flat glass with an obvious punch hole at the top for the front-facing camera.

Thankfully, Samsung kept the metal frame for a sturdy construction. I do hope Samsung would have chosen a matte surface finish instead of a slippery gloss finish.

The screen is a 6.5-inch Super AMOLED panel with 1080×2400 pixel resolution. I can go up to 120Hz for that silky smooth animation. The maximum brightness is around 400 nits which are decent for outdoor under a shade usage.

The camera module with 5 cutouts might mislead you into believing that this phone has a quintuple camera setup. Upon closer inspection, you will realise the fifth cutout is for the camera flash.

In actual usage, you will only be able to utilize the three cameras out of the four because the fourth is a depth sensor for simulating background blur.

That leaves us with three cameras –

Samsung had a pretty aggressive algorithm when it comes to the colour profile. Personally, I don’t think it is a problem since most of the users out there like how their photos are ready to be shared on social media.

That is also the reason why some phone brands manage to capture the attention of the users. In short, users want their photos to look great, not 1:1 realistic.

Personally, I think we are wasting money on the depth sensor and macro camera. Samsung could’ve passed the savings to the customers should they abandon both of them. However, in this era where some consumers judge a phone’s camera performance by the number of sensors or simply the cutouts at that camera module, they had no choice but to join the bandwagon.

If you’re planning to get the Galaxy A53 for heavy gaming, I think there are better choices out there. The Exynos 1280 is excellent for light gaming as long as it is not graphically demanding. While the latest Samsung update to enable “Alternate performance management” has improved the overall gaming experience, however, it is not a competition when facing the Snapdragon 778G.

For instance, in Genshin Impact, you might want to limit the frame rate to 30fps or turn the settings low to have a decent gameplay experience.

Like what we mentioned earlier, this is a phone suitable for those who want to use it for everyday tasks. Pairing the power-efficient Exynos 1280 chipset with a 5,000 mAh battery can easily last you an entire day. Just that Samsung no longer offers a charger in the box, which means you will have to either reuse your old charger or get a third-party charger. I strongly suggest you get a multi-port charger for your charging convenience.

At the official price tag of RM1,849, those who are familiar with the Galaxy A52 and A52s will raise their eyebrow at the 20% price increment. That is yet to factor in the use of a weaker Exynos 1280 SoC instead of the Snapdragon 778G. Sure, there are two major upgrades for the Galaxy A53 which are the battery life and future software support.

The Exynos 1280’s 5nm process combined with a higher capacity 5000mAh battery makes it an even better choice for those heavy users who don’t want to rely on a power bank. On top of that, The Galaxy A53 is part of Samsung’s commitment to providing 4 years of software updates.

In short, you get what you paid for. While it is easy to compare specs side by side with the price tag as a benchmark, we can’t say the same when it comes to software updates because it involves a huge amount of commitment from the phone company. If they commit to it, then it is a priceless feature. Then again, there are times when a company go back on their words.

All in all, the Samsung Galaxy A53 5G is an excellent phone for everyday usage, especially for those who want to experience flagship software experience from the Samsung One UI at an affordable price range.