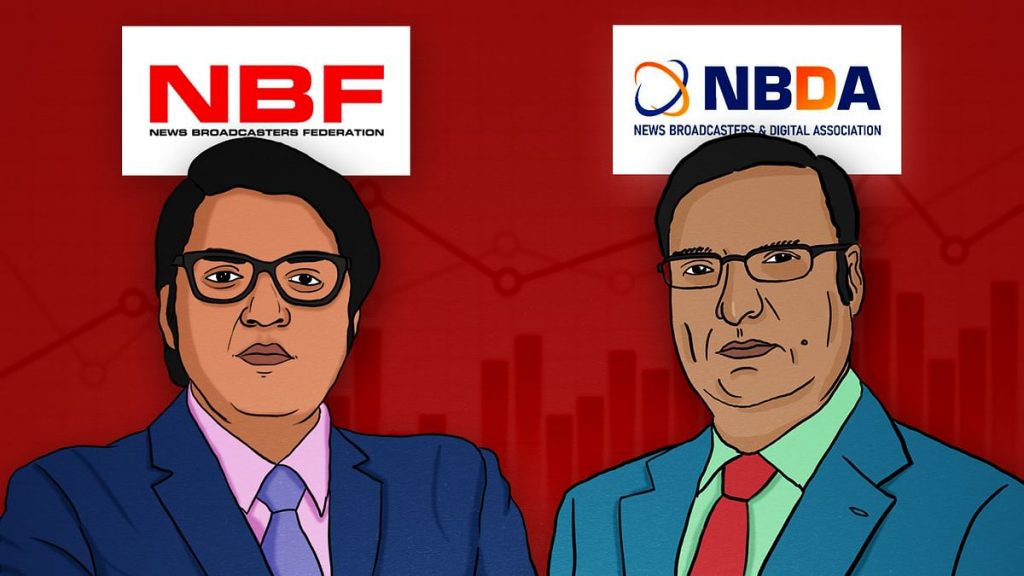 The currency of India’s boisterous news channels will soon be back in circulation. The Broadcast Audience Research Council’s TRP ratings for the news genre, suspended since October 2020, are expected to resume after an last week by the ministry of information and broadcasting.

BARC, an independent body, had halted ratings for three months. The decision was preceded by a turbulent series of events: an alleged “” that implicated Republic TV; and its chief Arnab Goswami’s arrest in . The body said it would “review and augment” its measurement system, and wanted to improve “statistical robustness and to significantly hamper the potential attempts of infiltrating the panel homes”.

Republic TV chief Arnab Goswami, who presides over the NBF, had opposed the ratings suspension. But his quieter counterpart, India TV’s Rajat Sharma, who heads the NBDA, had given it a thumbs up. “I want to do a one-to-one with Rajat Sharma,” Goswami had lashed out at primetime in October 2020. “Call me on your channel. I want you to face me.”

In November, the ministry put together a committee to “study and examine the deficiencies in the existing TRP system” – not just for news but other genres too. The report came in February, and the ministry asked BARC to hold the ratings until it had reviewed the committee’s report.

According to a source at BARC, both NBF and NBDA want ratings to resume. The disagreement is over when to release them. While NBF is batting for immediate resumption, NBDA wants to wait for six to eight weeks.

The respective positions stem from the extent to which channels rely on ratings – some need it more than others. “Advertisers want data to take advertising decisions. I think the incumbent and well established players want to delay [the ratings release] as much as possible as they feel they will still get advertising on their past reputation and history while the new players want to establish themselves on the strength of the ratings,” explained the source at BARC. “NBF is new players while NBDA are the established guys.”

NBDA includes networks like Zee, News18, India Today, NDTV, ABP and channels like India TV and Times Now. Contrast this with the NBF, whose only mainstream news members are Republic network and ITV channels. The rest are a host of regional, vernacular news.

Then there is the TV9 network, the enfant terrible of NBDA. In 2011, it exited the association over a cringeworthy story on “” in Hyderabad. But it returned to the fold in 2020, shortly before BARC paused ratings. In August last year, the network joined the NBF too, obtaining an odd dual membership.

Last week, TV9 made a slapdash exit from the NBDA, bringing the latest argument between NBF and NBDA to the fore. As if to rub salt on the wound, Barun Das, the network’s CEO, on Republic TV.

The reason was ratings. “We have been writing to them [NBDA] about their stand on resumption of ratings,” Das said. “We haven’t got any answer from them.”

TV news is not a consequential part of the TRP universe. Though news channels constitute nearly 46 percent of all channels, they only seven percent of Indian viewership. English news channels at 0.04 percent. Since the figures are so minuscule, it is easy for advertisers to ignore which news channel is leading this insignificant race and focus on bigger genres like sports and entertainment. So when it comes to marketing their product and allocating ad monies, BARC’s weekly ratings in the news genre is a redundant metric for advertisers.

Additionally, the smaller a genre’s viewership, the easier it is to with landing pages and dual LCNs. Advertisers, therefore, use other metrics to grasp a news channel’s popularity, like digital activity and perception.

Yet, since they deal in information, news channels get good deals with advertisers. More so for entrenched channels, or “legacy players”, who use their decades-old presence in the game for better cash. So, even if three-year-old Republic Bharat’s ratings outshines 20-year-old Aaj Tak’s, it won’t translate to more ad revenue for the infant broadcaster.

For this reason, the newer players face a disadvantage. When TRPs are paused, legacy channels can approach advertisers with viewership data collected over a decade or more. The newer ones can’t.

Weekly ratings also help channels to gradually decipher what a viewer wants to watch. Again, the entrants need this more than the veterans.

This is the crux of the NBF vs NBDA face-off. While the latter can wait for the ratings to resume, the former wants it now. “I can’t go to the market and get advertising because I don’t have ratings,” R Jai Krishna, Secretary-General of NBF, told Newslaundry. “Every single day is a matter of survival. There are dozens of channels that are being forced to shut down or sell off. Moreover, there are at least over 200 news channels that are not part of either NBF or NBDA – they are deeply impacted too for no reason.”

An NBF source told Newslaundry that by July 2021, BARC had made the technical changes to its measurement system, in line with recommendations for greater transparency proposed by the ministry. Anurag Thakur, the new minister of information and broadcasting, wanted “real and concrete” proof that BARC’s system had indeed changed. And by December, the source added, he had it. In a December 16 meeting, the ministry gave BARC the green light.

The fact that ratings have not been rolled out yet is frustrating for NBF, which has been pressing the ministry for it. An NBF insider said the body suspected that the NBDA is behind the “delay”, since its channels lag behind NBF channels – such as Republic network – in ratings.

“In November, BARC told us that it was ready to release the ratings,” the NBF source said. “So, where are they? BARC has run out of any more lame excuses or illogical reasons to further delay the ratings for news genre.”

Those at BARC say that the ratings will be out in eight to 10 weeks, since that is the time the body needs for “stakeholder alignment”. “There are more than 400 channels to check with,” said the source in the BARC grapevine, brushing off allegations that the body was buckling under pressure from either of the two news associations. “BARC is its own master and will do its own thing.”

NBDA members said that NBF claims have no weight. “The ministry asked BARC to release the ratings,” said an industry source. “It didn’t say release it this evening, or this week. All other channels have been patient about this. I don’t know why only Republic and TV9 feel so aggrieved. The ratings will come out when BARC is ready.”

According to ANI, the ministry had BARC to resume ratings “on an immediate basis”.

There are also anxieties about Republic TV’s credentials in NBDA circles. In late 2020, the Mumbai police had accused the channel of spiking ratings by bribing former BARC CEO Partha Dasgupta and a handful of homes with meters to monitor viewership. Goswami repudiated the charges, calling them “an absolute, despicable falsehood”.

“I think BARC has made some changes and needs time to make the remaining ones,” said a source close to NBDA. “If they resume ratings now, just before elections, and if some channels use the old tactics to manipulate ratings, then what?”

We reached out to Rajat Sharma for comments. This piece will be updated if we receive a response.

The only thing that NBF and NBDA insiders agree upon is that BARC has reformed its corporate governance and technology in the past year. But as the body prepares to roll out the ratings, the prevailing calm of the last 16 months seems fragile. The bickering and mud-slinging during the alleged “TRP scam” between Republic TV, Times group and India Today network left a bitter aftertaste for an industry kneeling and crawling for ad revenue. One can only hope that a renewed BARC will not revive the chaos.

Newslaundry sent a set of questions to BARC for comments. This piece will be updated when we receive a response.