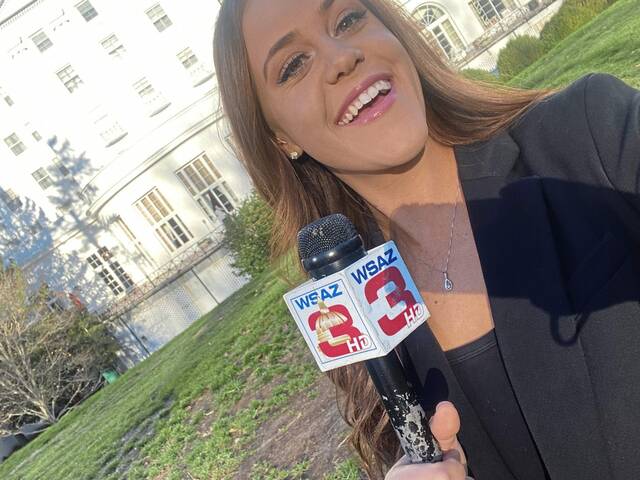 Praised for her dedication and good humor while also instigating discourse around television reporter safety, it’s been a whirlwind for future WTAE reporter Tori Yorgey in the days days after she was hit by a car while reporting live from a water main break in Dunbar, W.Va.

The Philadelphia-area native went from a familiar face to viewers in the Charleston-Huntington TV market to a name in articles nationwide.

In a phone interview Sunday, Yorgey said she never saw the car coming.

“I thought she was running me over initially. And then I kind of just blanked out,” Yorgey said. “Had I been over a foot or something, that could have been really bad. That does make it scary.”

Yorgey said she’s seen the video replayed “more times than I really want to because everybody’s been replaying it” and noticed that viewers can see the car come in from the upper right side of the frame.

“When I do a live shot, my sole focus is the camera,” she said. “I don’t look at anything else. It was really scary and I definitely shed some tears after that live shot.”

Wow. I am flattered by the kindness and well wishes. I am feeling fine, just a little sore! Thank you all so much.

For the record: @WSAZirr couldn’t see what was happening in that moment. He is one of the kindest people I know, and was first to call to check on me. pic.twitter.com/kusuDnEvfG

But she said if she had it to do over she’d make the same choices. She was out of the way of the water company workers and not in the road but in the driveway of an apartment complex up against a curb. Other cars entered and exited the complex without getting near Yorgey.

“I just really thought with all the emergency lights from the water crews that it’s gonna be a safe place,” she said, noting she had her camera light on and wonders if the driver, who stopped and apologized profusely, was distracted by all the lights at the scene.

• TV Talk: Future WTAE reporter hit by a car live on the air

Yorgey said after driving back to the TV station, WSAZ’s news director took her to a hospital to get checked out. Yorgey was sore for a few days but otherwise unharmed.

Yorgey first got a hint that her live shot was getting attention when a cousin in Philadelphia called her two hours after the incident. Then things really blew up Thursday morning as more news outlets picked up the story and more people shared the video on social media. Many were taken with Yorgey’s composure and even sense of humor, particularly when she announced after getting hit that she’d previously been hit by a car in college.

“I truly think the reason I mentioned it at that point was I was so in shock but also to make (the driver) feel better and also me,” Yorgey said. “I’m just a funny person. I’m a little weird. Like, I kind of talk myself through stuff. I’m trying to talk myself through and reassure viewers and (the anchor) and even myself that I’m OK.”

As for that college incident, it was less dramatic than Yorgey’s live shot: While walking along a sidewalk and crossing an alleyway a driver rolled through a stop sign and just pushed into Yorgey, who did not fall down.

Even before Yorgey’s experience, concerns around TV reporter safety have become more pronounced in recent years due to covid-19 and news-of-the-day that requires reporters to cover demonstrations and riots. Sometimes TV reporters are even accosted by members of the public.

I can’t believe it’s my last day here at #WSAZ. Thank you to everyone who has welcomed me, and trusted me to help tell their stories.

I love you, West Virginia.

I say “happy (day of the week)” everyday when I come in, so naturally this cake brought me to tears. #LoveUPeople pic.twitter.com/GyXwMC5g51

After the video of Yorgey went viral online conversation turned to safety concerns around multimedia journalists, also known as MMJs or “one-man-bands” where a broadcast journalist serves as a reporter and his or her own videographer.

CNN correspondent Dianne Gallagher tweeted, “STOP SENDING REPORTERS OUT ALONE TO RUN THEIR OWN LIVE SHOTS. Especially in the dark. Especially on the side of the road. Especially in severe weather. But really, in any circumstance, it’s unsafe and unfair to the journalist AND community.”

A 2019 Committee to Project Journalists report identified solo work as one of the biggest safety gaps for broadcast journalists, especially women.

MMJs are not as often seen in larger TV markets, but with the development of portable transmission packs, multimedia journalists setting up their own lives shots, as Yorgey did, have become more common in smaller TV markets. (Charleston-Huntington ranks as the 77th largest media market in the U.S., per Nielsen; Pittsburgh is No. 26).

Yorgey said she’s a three-year MMJ veteran who was trained for her solo role. She said all the reporters at her Charleston station also operate as MMJs while those at competing stations in the market typically work with a videographer.

“I think a conversation (about MMJs) should be had, but in my particular incident, I will always say that was a freak accident as far as the safety aspect goes,” Yorgey said. “I understand people saying we should have photographers with us. … I don’t know if my incident should be the reason it’s a conversation just because I didn’t feel I was in danger. If I felt I was in danger, I wouldn’t have been there.”

Pittsburgh TV stations have not traditionally used MMJs, always sending out a reporter and a videographer. But that may be changing.

While WTAE news director Jim Parsons said Channel 4 has no plans for MMJs, KDKA-TV will add at least one. Freelance reporter Chris Hoffman will join the KDKA staff as an MMJ but with a key difference — except in rare cases when a reporter stumbles upon breaking news and is without a videographer, the SAG-AFTRA contract with KDKA prohibits solo live shots.

“I’ve always wanted to land in either Pittsburgh or Baltimore and hopefully make my way back home someday to Philly,” Yorgey said. “So I knew [I wanted] Baltimore or Pittsburgh for my next market and I just decided Pittsburgh because I really enjoyed my time there.”

She’s been thinking about how she’ll be perceived going forward and hopes she’ll move past the “reporter who got hit by a car” identifier.

“WTAE does a great job at telling stories that are impactful and necessary for viewers so they can make decisions about their lives, so I hope that people tune in for the stories that we’re going to tell,” Yorgey said. “I’m just really excited to be out there and get to know the area and the community and just be back in my home state.”

You can reach TV writer Rob Owen at rowen@triblive.com or 412-380-8559. Follow Rob on Twitter or Facebook. Ask TV questions by email or phone. Please include your first name and location.