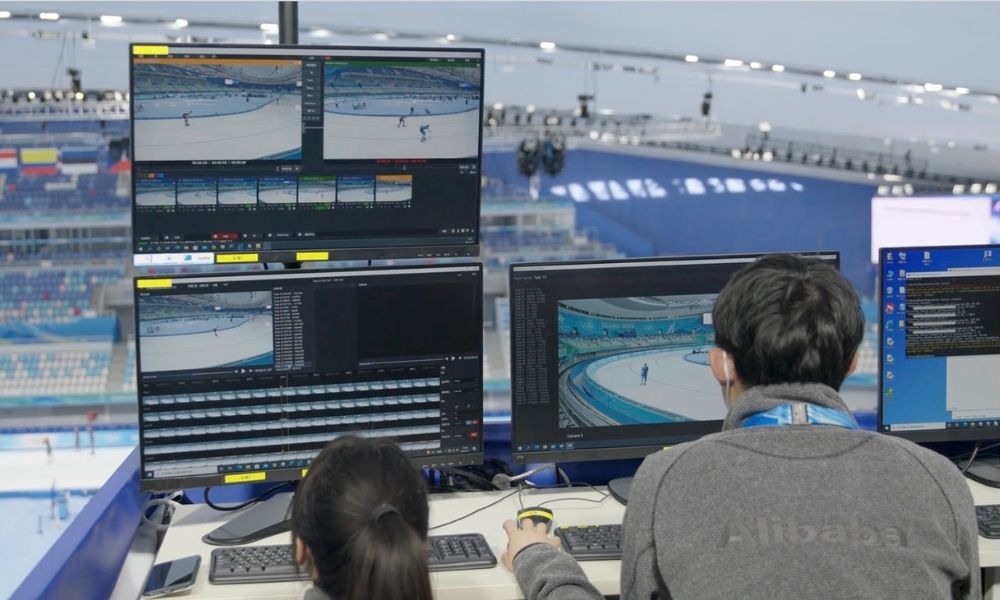 Olympic Broadcasting Services (OBS) and Olympic partner Alibaba say the first use of public cloud technology to transmit live footage to broadcast partners during Beijing 2022 has been a success, allowing for greater efficiency, flexibility, and creativity when compared to conventional methods.

As the centralised Olympic broadcaster, OBS captures, produces, and distributes live footage and highlights to the International Olympic Committee’s (IOC) broadcast partners who then add their own production elements, such as commentary and studio analysis on top.

By the time this Winter Olympics is over, OBS will have distributed more than 6,000 hours of live content when all feeds are considered. Traditionally, live footage has been shared using fibre or satellite technologies, but for Beijing 2022, more than 20 Olympic broadcasters have opted to receive live signals via OBS Cloud.

Advances in cloud technology mean it is just as reliable as other methods, while also reducing the cost, complexity, and time associated with installing dedicated infrastructure. Meanwhile, the scalable nature of cloud platforms means it can cope with surges in demand.

OBS’s Content+ also lets broadcast partners edit live streams while they are still being distributed, make it much quicker to create social clips, and supports remote production. This is particularly important given Covid-19 has meant broadcasters have far fewer production staff on the ground in China than at previous Games.

OBS, which is using cloud-based editing for its own workflows, says the number of partner broadcast staff on site is down by two fifths when compared to the last Winter Olympics in Pyeongchang four years ago.

“Amid the backdrop of Covid-19, our partnership with Alibaba Cloud has continued to transform the way we broadcast the Olympic Games,” said Yiannis Exarchos, OBS chief executive. “OBS Cloud is one of the most profound technological changes to our operation: it not only offers broadcasters unprecedented efficiency, but also enables endless opportunities for innovation and to seamlessly deliver the excitement of the Olympic Games to the widest possible audience.”

Both OBS and Alibaba, which became a top-tier Olympic partner in 2017, say the success of the venture demonstrates the future viability of cloud distribution for the Games. But the benefits are not just operational – cloud technology is also driving creativity.

Whereas traditional cloud systems send data to and from a centralised data centre, edge computing processes the data as close as possible to the point of collection, dramatically reducing the amount of time taken to produce these replays so they can be used in real time. For less time-sensitive tasks, such as creating 3D models to be used in highlights packages, the footage is sent to a more typical data centre where Intel-based chips can create scenes within a minute.

“Transmitting live content through cloud is a particularly useful resource for broadcasters who cannot attend the Olympic Winter Games in person or afford the heavy upfront investment of on-premise infrastructure,” said Selina Yuan, general manager of international business at Alibaba Cloud Intelligence. “We hope that cloud technologies will not only reduce the cost associated with broadcasting, but also bolster the coverage of the Olympic Winter Games as more [broadcasters] can access the live footage and choose the feeds they prefer. Ultimately, we hope more sports fans around the world can enjoy the excitement of the Olympic Winter Games.”