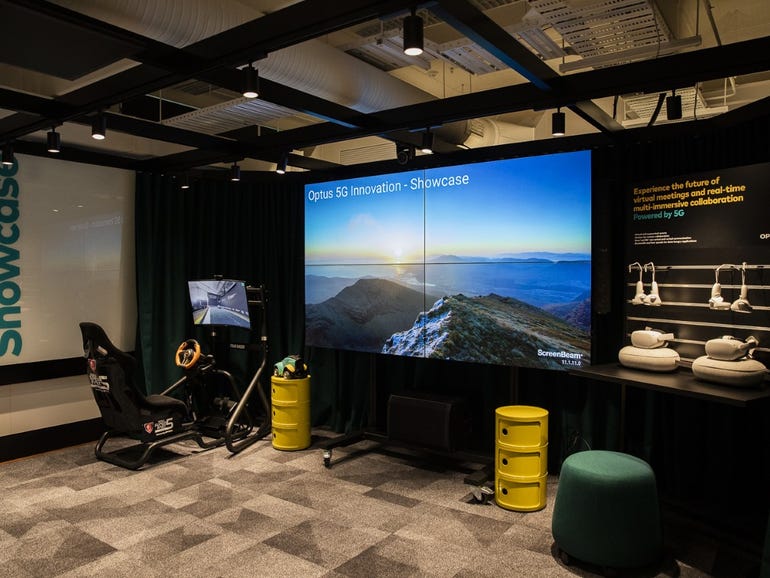 In the middle of the heritage building that houses the Sydney Startup Hub is a floor with telecommunications equipment stashed in various corners and coves, all covered in touches of a colour best described as Optus corporate green. It is here that Optus has chosen to host a 5G Innovation Hub where it can co-create with its customers and those that inhabit the rest of the Startup Hub.

One of the pressing issues with 5G is its lack of consumer necessity. Having had 5G service since August, it can definitely be categorised as a non-essential nicety. If 5G disappears off my device tomorrow, the world will not end.

But that means the enterprise side of the equation when it comes to 5G is driving adoption, which is a nice place to be, according to Optus Enterprise managing director Chris Mitchell.

“There’s a lot of focus on 5G in the enterprise and we really think that’s going to be where the real adoption at scale is going to come from, probably starting at the top end of town [and] working back through,” he said.

An issue that telcos need to tackle though, is that for all the bluster about 5G being the future, there is not a use case that can easily demonstrate why it is useful. It’s something that Mitchell is trying to tackle.

“The key for us I think is coming up with the right use cases,” Mitchell told ZDNet.

“If you really peel back the onion, there’s not an absolute killer enterprise app for ultra-low latency yet — you’ve obviously got remote surgery, you’ve got all the autonomous vehicles — but our view is it’s really about reliable ultra-low latency.”

This is an area where enterprise can improve consumer-grade connectivity as organisations will have a service-level agreement to enforce.

“If you look at the latency between 4G and 5G out on the edge — with a fibre backbone it’s probably 20-30 milliseconds … and it doesn’t seem like a lot but it could go out to 200-300ms because there is no guarantee on that 4G latency as to what it’s going to look like,” Mitchell explained.

A nexus of cloud, network slicing, and software-defined networking now means telcos — after years of having customers wanting to treat them as dumb pipes — can now offer something other than pure connectivity. Mitchell said rather than focusing on designing data networks, enterprises can contract connectivity and set network management terms on a granular level such as a certain area getting 2Gbps service, and another area receiving much slower speeds.

“That’s why that reliable ultra-low latency is the key,” he said.

Optus had Huawei kit too: How Vodafone Australia changed its 5G plans after the Huawei ban

While Optus continues to search for the killer app, one area it is looking towards is video analytics. While the idea of drones detecting fires remains in the realm of science fiction, the reality is much more sedate.

“We’ve been experimenting with high definition cameras on fire towers scanning the horizon which traditionally has done by firey with literally binoculars, and can we outperform a firey? And the answer is yes,” Mitchell said.

“In terms of the cameras and not ever going to take a rest break, and never going to get tired looking at the same thing.”

The company is also working with Endeavour Energy and AWS to use drones to monitor electrical transmission infrastructure, and video analytics could be a part of the future of work.

“We see uses cases around safety … just stopping people doing dumb things or doing tasks they’re not qualified to do, and all those sorts of things,” Mitchell said.

“So that’ll either be a big safety impact or it could be a productivity impact because that job is going to be done perfectly against best practice benchmarks because it’s been driven by real-time video analytics.”

In this modern world, betting on employers using video to constantly surveil employees under the guise of best practice or safety, Optus could very well be onto something.

ZDNet’s Monday Morning Opener is our opening take on the week in tech, written by members of our editorial team. We’re a global team so this editorial publishes on Monday at 8:00am AEST in Sydney, Australia, which is 6:00pm Eastern Time on Sunday in the US, and 10:00PM GMT in London.