No 5G base stations near airports 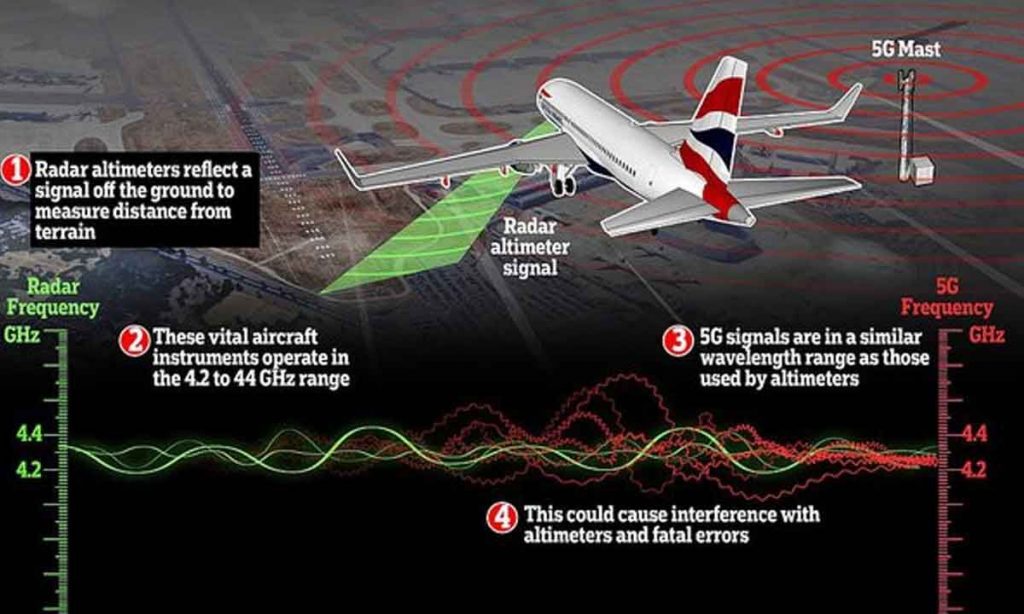 New Delhi: The Department of Telecommunications (DoT) has sent a letter to telecom providers Bharti Airtel, Reliance Jio and Vodafone not to install C-band 5G base stations within the 2.1 km range of Indian airports with immediate effect, as C-Band 5G can create problems with the aircraft’s radio (radar) altimeters, which they rely on during takeoff and landing, and to help avoid crashing into mountains.

The DoT letter, said that the telecom service providers (TSPs) are advised that “in the area 2,100 meters from both ends of runway and 910 meters from centre line of runway of Indian Airports shall have no 5G/ IMT base stations in the 3,300-3,670 MHz.”

“The base station, nodal or repeater installed in the periphery of 540 metres surrounding the area, the maximum power must be limited to 58 dBm/ MHz in 3,300-3,670 MHz range,” the letter said.

According to the DoT letter, the Ministry of Civil Aviation has provided the buffer and safety zone sketch and has requested to ensure mitigation measures while implementing C-band 5G spectrum, in and around the airport areas in view of the safety concerns for operation of aircrafts.

The DoT asked telecom providers to ensure downward tilting of 5G base stations to an extent such that the 5G emissions do not interfere with radio altimeters.

The new rule will be applicable till the replacement of all aircraft Radio Altimeters filters is ensured by the DGCA. “It is expected that the Directorate General of Civil Aviation (DGCA) will proactively ensure the above in a time-bound and expeditious manner. DGCA is requested to inform DOT as soon as the above task is complete to enable lifting of the restrictions,” read the DoT letter.

As high-speed 5G wireless networks roll out across the world, pilots in the US are also reporting frequent problems with the aircraft’s radio (radar) altimeters.

According to an analysis of reports by IEEE Spectrum (the world’s leading engineering magazine) made to NASA’s Aviation Safety Reporting System (ASRS), complaints of malfunctioning and failing altimeters soared after the rollout earlier this year of high-speed 5G wireless networks, which use similar C-band frequencies.

“In January this year, at least three flights above Tennessee in the US simultaneously experienced altimeter errors that made it “impossible to maintain assigned altitude”, according to one of the pilots.