No. 4 Gators Caps Off T-Mobile Tournament with Win over the Rattlers 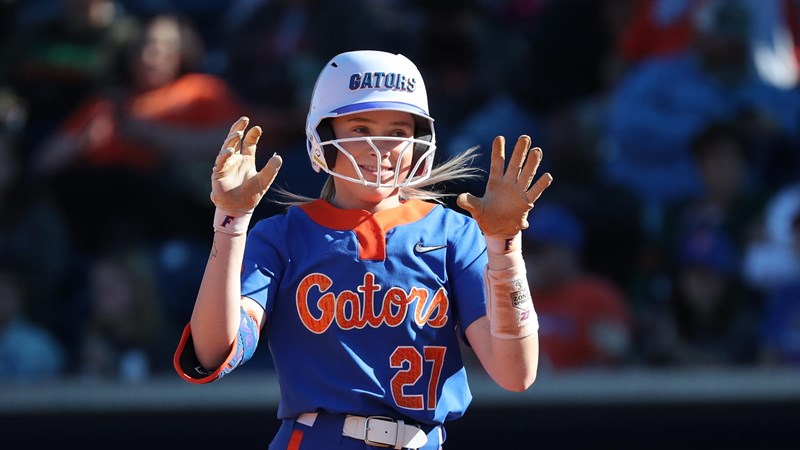 GAINESVILLE, Fla. – The No. 4 Gators closed out the T-Mobile Tournament defeating Florida A&M, 8-0 (5 innings), Sunday afternoon at Katie Seashole Pressley Stadium. The shutout victory is Florida’s sixth of the season.

The Orange and Blue improved to 10-0 thanks to a shutout performance from junior pitcher Rylee Trlicek and Marissa Mesiemore. The Hallettsville, Texas native started in the circle and tossed 4.0 innings to secure her first win of the season. She surrendered two hits and struck out two batters before she was relieved by the graduate transfer Mesiemore (Bushnell, Fla.) in the 5th inning.

The duo combined to throw only 48 pitches in the 1 hour and 26-minute contest.

The Gators entered the run column in the 2nd inning with Charla Echols scoring the first run via a wild pitch after a walk by Reagan Walsh. Emily Wilkie would follow that up by knocking in Walsh from third on a groundout to shortstop.

Kendra Falby capped the inning off lacing a double down the right field line to score Avery Goelz for the 3rd run of the inning.

Florida struck for two more in the 3rd inning and took a 5-0 lead thanks to Echols as she launched a pitch over the right field fence after Skylar Wallace reached on a hit by pitch. It was the first home run of the year by Echols.

Continuing to do damage in the 4th inning, Falby swiped two bases and scored on a throwing error by the catcher trying to nab her at third base after her bunt single. Echols extended the lead for her third RBI on the day lacing a single into center field.

Falby produced the game ending hit with a single to left field for her second RBI of the game.

The Gators return to action Tuesday, Feb. 22, at 6 p.m. with a single game at North Florida and then will host the Ospreys the following day at Katie Seashole Pressly Stadium at 6 p.m.

“Kendra doesn’t lack confidence. She’s definitely a confident kid, but she carries herself in a way that allows her to be consistent. She’s not arrogant. She’s not cocky. She’s confident she does a good job. Every day in practice she enjoys being coached, she enjoys the challenge and is never defensive. She’s just a good kid, hard worker, but still does things to continue to get better.”

On Rylee Trlicek’s start and impression of her performance today…

“It’s nice to see Rylee get innings, she’s a great kid. She works hard and she’s a very reliable person, friend and worker. Last year was a struggle not getting a chance to watch her compete, so it is nice to see her go out there and induce a ton of ground balls.”

On her first start of the season, first victory…

“Feels really good I was excited to start today just because I’ve kind of taken more of the closer role with our other three pitchers that have been pitching lights out starting. So being able to start was really exciting.”

On what was working for her in the circle…

“Like you said I produce ground balls and let my defense work for me. That’s what works best for me and stick to my lower pitches, my drop ball and locating well and then letting my defense do what they do, because I mean they’re one of the best defenses in the country so why not let them help me out and not put it all on me.”

“Yeah he was here today and he told me “bout time” like I said I just been trying to work the process and I got one today.”

On what worked today for her offensively…

“Probably just me focusing more on lowering my ball flight like you said I been hitting a lot of popups and there not quite making it out so just really trying to hit line drives hit hard ground balls and just trying not to over swing.”

On the emotions she was feeling after she hit her HR…

“It was exciting. I think the best part for me was seeing how happy my teammates were for me because like I said we come here every day and we’re all working really hard. It’s exciting when people get what they been working for, so my favorite part by far was getting to come back into the dugout with my teammates.”