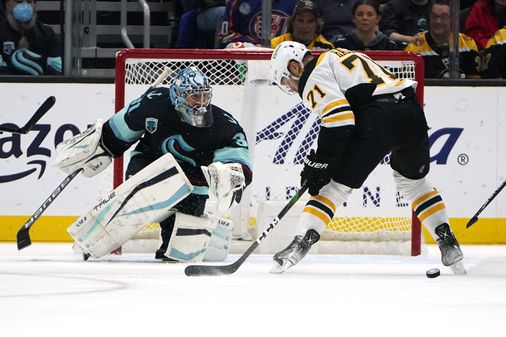 NESN’s continuing choice to not send play-by-play voice Jack Edwards and analyst Andy Brickley to away games led to a ridiculous scene Thursday night during its broadcast of the Bruins-Kraken game.

Since the beginning of the pandemic, Edwards and Brickley have called road games off monitors in the network’s Watertown studios.

That has led to some confusing situations on broadcasts this season, such the broadcasters not knowing a goalie had been pulled because it was not shown on the monitor from the video feed they were receiving.

Edwards has made it clear at various times this season that he is not a fan of the situation, which at this point does look more like a cost-saving measure than a safety issue.

But at least they were still calling the games. Last night, even that became impossible for a few awkward minutes.

Early in the third period, Edwards told viewers that a fire alarm was going off in the NESN studio. With 17 minutes, 24 seconds left to play, he announced that the broadcast team was being evacuated.

Get Sports HeadlinesThe Globe’s most recent sports headlines delivered to your inbox every morning.

Edwards and Brickley were absent from the broadcast for a little more than 7 minutes. In the interim, NESN showed the Kraken’s local broadcast from Root Sports Northwest, with John Forslund and J.T. Brown on the call. During commercial breaks, the NESN broadcast showed the overhead view of the arena.

Edwards and Brickley returned to the air with 10 minutes 7 seconds left in regulation.

“The building did not burn down!” Edwards said. He later thanked the Watertown Fire Department and said he spent the brief absence “freezing” in the parking lot. Brickley said he  went to his car and listened to the radio broadcast of the game on The Sports Hub.

The Bruins won, 3-2 in overtime, on Jake DeBrusk’s second goal of the game.

“Dare I say it? Jake DeBrusk is burning down the house!” he said.