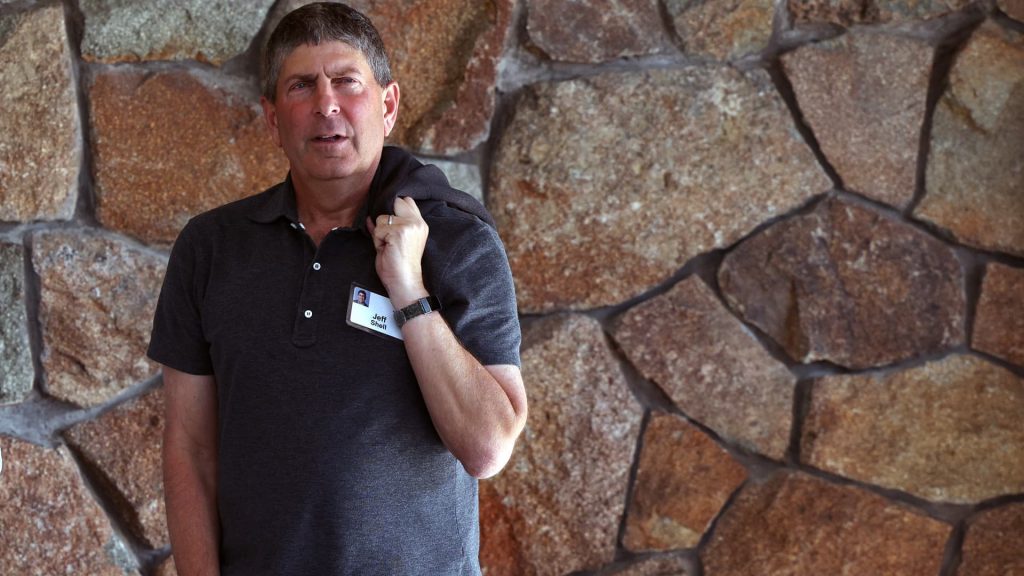 CEO of NBC Jeff Shell arrives for the Allen & Company Sun Valley Conference on July 06, 2021 in Sun Valley, Idaho. After a year hiatus due to the COVID-19 pandemic the world’s most wealthy and powerful businesspeople from the media, finance, and technology will converge at the Sun Valley Resort for the exclusive week-long conference.

NBCUniversal CEO Jeff Shell said Tuesday the company’s movie business is performing well on the hybrid model of releasing some films simultaneously in theaters and on streaming services, while waiting to make others available for viewers at home.

In an interview with CNBC’s David Faber on Tuesday, Shell said the pandemic-inspired model of film releases has been “attracting some of the best filmmakers.”

Paramount’s peak earnings growth is likely in the past, Wells Fargo says in downgrade

Previously, studios typically made movies available exclusively in theaters before releasing them for viewers at home, including on streaming services. That changed when the Covid-19 pandemic shut down theaters, leading some companies to release films directly on streaming services for a period.

Shell said the breakdown of the traditional film release model, known as the movie windowing scheme, is having a positive impact on both the movie and streaming businesses.

“That construct of the windowing combined with the fact that streamers really want movies, movies are driving platforms, has in my opinion made the movie business economically better,” Shell said.

The changing film release model during the pandemic initially caused some strife for media companies. Some evaluated releasing movies directly on streaming services on a case-by-case basis, which Shell said NBCUniversal continues to do. Others such as Warner Bros. released many of its biggest movies on its HBO Max streaming service and in theaters at the same time.

“We’ve reacted to that by putting more money into the business,” Shell said Tuesday.

In many cases, the window to bring a film to a streaming service or premium video on-demand can now be as little as 45 days, cutting the previous window in half.

Comcast‘s NBCUniversal has continued to adapt its approach on a movie-by-movie basis. Some films, such as “Nope,” are released in theaters before they become available exclusively on the company’s Peacock streaming service for a period. Others, such as the latest installment of the “Halloween” movie franchise, are released in theaters and on the streaming service at the same time.

“We’re making twice as many movies as our nearest competitors, and we’re buying all that content and moving it into Peacock to establish the streaming service,” Shell said.

Peacock now has 15 million paying subscribers and 30 million active accounts, Shell said on Tuesday. Much of its subscriber growth has been driven by content such as the company’s sports and movie offerings, he said.

Disclosure: Comcast is the parent company of NBCUniversal, which owns CNBC.