Moto G52 Review: Is Android 12 Enough To Save This Otherwise Mediocre 4G Phone? 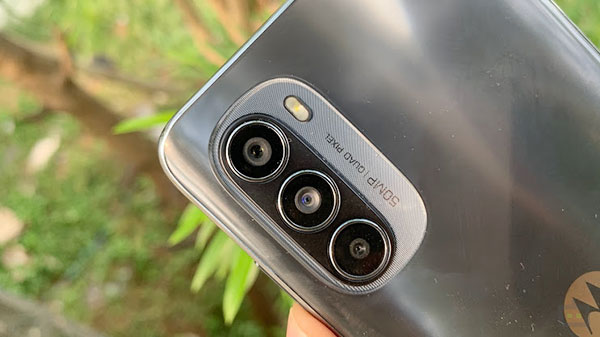 The new Moto G52 joins the long list of 4G-only devices in India, priced at Rs. 13,499. It packs some premium features like the OLED display and 30W TurboPower fast charging support. I’ve been using the Moto G52 for some time now and exploring everything the phone has to offer. I’ve discussed the pros and cons of the same in this review.

The Moto G52 includes a triple-camera setup at the rear and the camera bump is minuscule. The Moto branding is highlighted on the rear panel. There’s also a 3.5mm audio jack below, a feature that many brands are now skipping. A fingerprint sensor is embedded with the power button for enhanced safety.

What really makes the Moto G52 stand out from the crowd is the 6.6-inch OLED display with an FHD+ resolution. The smartphone also offers a 90Hz refresh rate, which is good enough for casual games and browsing. I used the Moto G52 in both outdoor and indoor environments and found the display top-notch.

That said, the OLED display on the Moto G52 seems to be the only worthwhile upgrade. Motorola has been steadily launching several phones under its G banner, including devices like the Moto G71 5G and the Moto G31. The major difference between these phones seems to be only the processor under the hood.

This brings us to discuss the camera setup on the Moto G52. The phone packs a triple-camera setup at the rear with a 50MP quad pixel main camera. It also includes an 8MP wide-angle lens and a 2MP macro shooter. There’s also a 16MP camera in the front for selfies and video calling.

The phone also offers a few camera-centric features like Portrait Mode, Night Mode, Group Selfie, Cinemagraph, and so on. The Moto G52 can take some decent photos, especially in a well-lit environment or outdoors. I took a couple of portrait photos and they turned out pretty good.

Interestingly, the camera setup on the Moto G52 is identical to the Moto G71 5G, which also includes a 50MP triple-camera setup. In this scenario, there are only a few differences between the Moto G phones available in the market right now.

Speaking of differences, we come to the performance and specs under the hood. The Moto G52 draws power from the Snapdragon 680 chipset paired with 6GB RAM and 128GB storage. One of the notable features of the Moto G52 is the Android 12 OS out-of-the-box. I ran a couple of benchmarks on the Moto G52 to determine its prowess.

Firstly, I ran the Geekbench test, where the Moto G52 secured 377 in single-core and 1271 in multi-core tests. I also ran the 3D Mark test to determine the phone’s GPU power and the Moto G52 secured 444 points overall. Interestingly, the Realme 9 and the Oppo F21 Pro also pack the same Snapdragon 680 chipset.

The Realme 9’s score on 3D Mark is the same as the Moto G52. All three phones have identical scores on Geekbench. Overall, the Snapdragon 680 performance on the Moto G52 is good enough for routine use. This also puts the new Motorola phone in competition with other Chinese brands.

However, Motorola says the Moto G32 will get only one year of updates for the device. This means you’ll get a max of Android 13 update, unlike two or three years of update cycle on other phones. The Snapdragon 680 is a 4G chipset, which is another drawback of the phone. Apart from this, the Moto G32 is decent enough for everyday use.

I used the Moto G52 for a wide range of activities, including browsing, video calling, video streaming, clicking photos, and casual gaming. The phone can handle most of these tasks without a glitch. But the plastic body tends to heat up after long hours of continuous use.

The 5,000 mAh battery is huge, and lets you use the phone for a day on a single charge. The phone also tends to heat up when put on charge, which is expected. Overall the Moto G52’s battery is quite good, all things considered.

The sub-Rs. 15K segment is a crowded one in India, filled with phones from all brands available in the country. This puts the Moto G52 in a tough place with just a few upgrades over other phones from the same series. The lack of 5G support and limited Android upgrades makes the Moto G52 not that good a choice to consider.