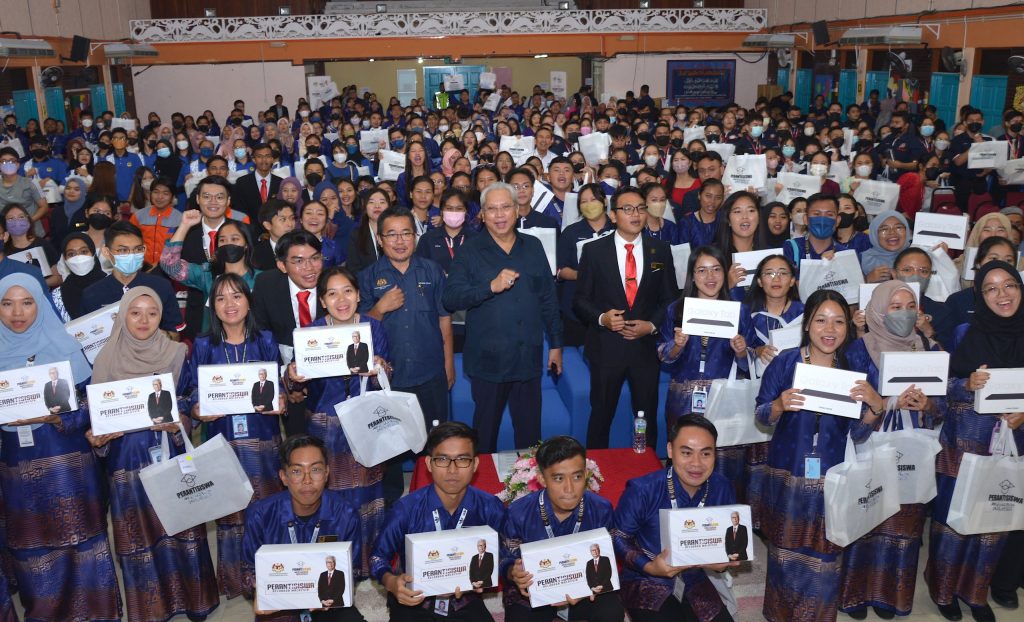 Annuar (standing front, centre) joins others in shouting the national slogan ‘Keluarga Malaysia, Teguh Bersama’ after the presentation of computer tablets under the ‘Peranti Siswa’ programme at IPG Sarawak Campus in Miri. — Photo by Information Department

MIRI (Oct 10): Ministry of Communications and Multimedia has set a target of 5G telecommunication coverage over Sarawak’s populated areas to reach 65.3 per cent by end of 2023.

According to minister Tan Sri Annuar Musa, efforts are being undertaken to carry out 5G infrastructure projects at a total of 339 sites identified in the state.

“Hopefully, we could speed things up in order to make 5G coverage over the populated areas in Sarawak reach 65.3 per cent by end of 2023,” he said during press conference held after presenting computer tablets to students under the ‘Peranti Siswa’ programme at the Teachers Education Institute (IPG) Sarawak Campus at Jalan Bakam here yesterday.

Adding on, Annuar said the latest report on the implementation of the 5G sites for Sarawak indicated that 90 out of 339 sites had been developed.

Moreover, he said out of the total of 339 identified sites, the majority of them are located in Kuching with 227 sites, followed by Miri with 69 sites, and Bintulu with 47 sites.

His ministry, he pointed out, would continue to monitor closely the implementation of such project.

He also said he was looking forward to having cooperation from the state’s infrastructure companies, particularly Sarawak Energy Bhd (SEB), by giving priority to the national digital agenda.

“This is because all digital facilities depend on consistent electricity supply.”

Annuar also said his ministry would continue to carry out engagement sessions and work closely with the relevant state agencies in ensuring that the implementation of the 5G projects in Sarawak, particular in Kuching, Miri and Bintulu, would run according to schedule.

“This is important as 5G technology would help boost the industrial activities in these three divisions.

“Furthermore, the use of 5G in Kuching, Miri and Bintulu would be a catalyst to support the ambitions of Digital Sarawak and Industrial Revolution 4.0 in the state.”