Michael Bisping on his transition to broadcasting, documentary 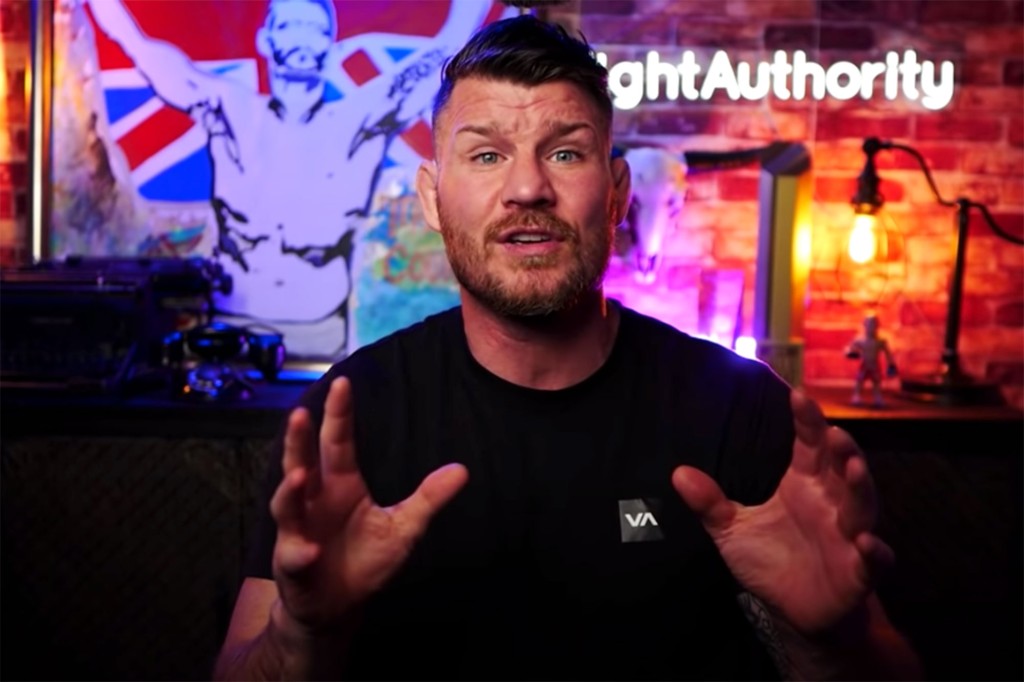 UFC Hall of Famer Michael Bisping (30-9, 20 finishes), the former middleweight champion and “The Ultimate Fighter” season 3 winner and coach, sat down for some remote Q&A with The Post’s Scott Fontana ahead of the March 22 digital release of “Bisping,” a feature-length documentary. The 43-year-old Englishman, who now is a color commentator for UFC broadcasts, discusses the film, his career, and more for the Post Fight Interview.

Q: What made it such an easy transition for you to go from fighting to broadcasting?
A: The UFC does a fantastic job. The production team behind the scenes provides us with as much information as possible. But, I dedicated my life to it, so it’s kind of my expert subject. I’m so happy and fortunate and grateful that I have this position. But I’m truly passionate about the sport, I really am.

Q: Let’s talk about this film, “Bisping.” It’s a clever name.
A: (Laughs) I never chose that name. It was called “Built for This,” but then the studios and the people involved were like, “No. We’re gonna go with ‘Bisping.’”

Q: What was the hardest thing to share and talk about in the film?
A: Talking about my youth, growing up. We had a turbulent household where I grew up. Obviously, I love my parents dearly, so I don’t want to throw them under the bus. So I didn’t go into that too much. But also, at the same time, I am gonna touch on it. There’s a reason why I was wired the way I was. There was a reason why I was always getting into fights as a youngster, in so many fights that ended up going to bloody prison. It’s because of, bloody, the household that I grew up in and because it just seemed very, very natural. I saw a lot of violence.

Q: In the film, you declined to reveal how you were able to stay licensed to fight after losing vision in your right eye from a detached retina, but recently you shared some of your experience with the tests with Joe Rogan. How come you held back in the film?
A: I guess just [because] time has passed. [It’s a] sensitive issue. I was lying and cheating and doing whatever I could. And I have respect for people, and I don’t want to make a fool out of them. But, here’s the story. That’s what happened. It is what it is. I don’t go into too many details. That was one occasion [discussed on “The Joe Rogan Experience”]. It was one occasion, I memorized the HR and stuff like that. To use an English expression, [I] blagged my way through it, bulls–tted my way through it, and that’s what I did all the time. I guess as the more time goes, the more comfortable I feel telling in. The documentary, when we were filming it, was the first time talking about it. I was like “Ah! Ah!” But now I let the cat out of the bag, so I’m getting a little more open.

Q: What does that say about the licensing and medical process that you were able to get through so easily?
A: It’s hard. It wasn’t easy. Trust me. It was not easy at all. I kind of played it down when I was talking with Rogan. That was just my way of deflecting and not going into too much detail about it.

Q: Clearly, there’s no love lost between you and Luke Rockhold, who agreed to appear in the documentary. Where do you and Dan Henderson stand?
A: As far as I’m concerned, we’re retired from fighting. It’s all done. It’s water under the bridge. Any rivalry that we had is been and gone. It’s all good. Share a little fist bump at the airport or whatever. “How you doing, Dan?” Just pleasantries like that. And then he just came after me one night when I was commentating, like tagging me in tweets. I guess he’d had a few beers or something. So, eh, whatever, Who cares?

Q: It was reported a few years ago you’d be starring in “The Journeyman.” Can you say anything about the status of that project?
A: It’s an independent movie, so the financing is what’s really holding that up. We have some of it. It’s part-financed, just trying to secure the rest of it. “The Journeyman” is an incredible script. It really is.

Q: What’s the best scripted MMA film so far?
A: I still feel that the “Rocky” or the “Raging Bull,” if you will, of mixed martial arts movies has yet to be made. And that is something I want to be involved with.

Q: You were once among the most natural heels in MMA, at least to Americans. What’s the secret to drawing heat like that without coming across as fake?
A: Well see, that’s the thing. Of course, you want to try and be charismatic and entertaining and have something to say, and being polarizing is actually the best way because half are gonna hate you, or they’re gonna cheer for you. But you got to be yourself. You’ve gotta be authentic. And if you’re not that guy, don’t be that guy because, when you do try and do it, it comes across as kind of cringe if it’s not authentic. It’s not real. Rehearsed lines and stuff like that, there’s few people that you can get away with that. Chael Sonnen did a fantastic job with that because he really leaned into that pro wrestler angle. You know, sometimes other people do that. And he just comes across as cringe. I’ve definitely said things I regret over the course of my career. I look back, and I go, “Oh, my God! Why did I say that?” But, spur of the moment with a microphone in my face, maybe I should have rehearsed a line. It would have been better.

Q: Which middleweight from your time competing did you not face but wish you’d had the chance to?
A: Rich Franklin: I always have respect for him. He was a great fighter and a great person. So just out of respect and him being the champion at the time (2005-06). There was him. Robert Whittaker: We were scheduled [for November 2015], but I had to have elbow surgery, so I had to pull out of that one. And I guess Yoel Romero; I was linked to him a few times as well. And the popular narrative: People say, “Oh, why’d you duck them?” I went into the cage and challenged the winner, and Robert won. And then that fight never happened.

Q: You can fight anyone in history. Who do you pick?
A: I try not to hate anybody these days because that’s just giving them control over you. I try not to have these strong emotions either way. But … Vladimir Putin. I’d f–king crush that motherf–ker. He needs to get his s–t together.

Q: Favorite movie?
A: I’m so influenced by recency bias. Every movie I watch on a plane: “Oh, my God! I saw the best movie you’ve ever seen.” Like “Ford v Ferrari.” I watched that recently on a plane. I was like, “Wow!” But it is a great movie. It’s incredible. But, yeah, “Back to the Future” and “Goodfellas” are two that spring to mind.

Q: Favorite song?
A: “Nights in White Satin” [by The] Moody Blues.

Q: What’s a perfect day for you that doesn’t involve fighting?
A: Spending time with my wife [Rebecca] and children. … Having a nice breakfast or sitting at a barbecue with the family.