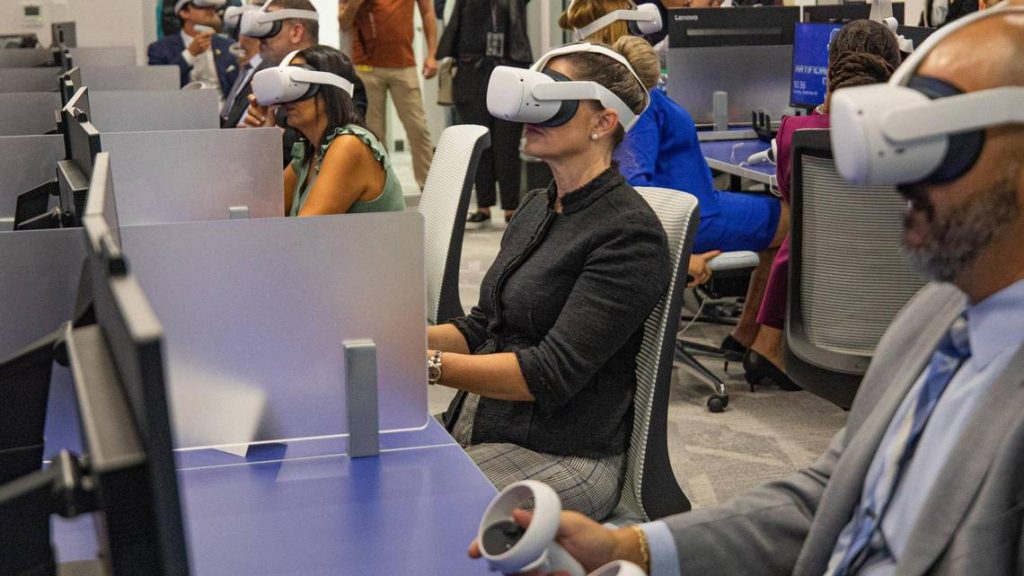 Upon entering Miami Dade College’s new Artificial Intelligence Center Tuesday on its North Campus, a college administrator asked a hologram named Sky to cite the names of the college’s trustees.

Without hesitation, Sky mentioned each trustee as the crowd around her chattered in awe. Sky is just one example of the innovation housed in the center.

As part of its efforts to better prepare students and local residents for technology careers, Miami Dade College and its foundation invested $6.5 million to construct the 13,000-square-foot center on the second floor of one of the campus buildings.

Miami Dade College Vice President of Innovation and Technology Partnerships Antonio Delgado said the center exemplified the college’s commitment to providing the community with the resources to be a part of Miami’s burgeoning tech ecosystem.

“It is even more relevant to have this at Miami Dade College as a community college because we represent the community,” he said. “This is an area that needs that spark, opportunity and integration of the jobs that are coming.”

Delgado has had practice using the intelligence center’s virtual reality headsets that will be used for class lectures. In a demonstration of the center’s tech readiness, a college professor held a “class” in which participants joined Delgado and used virtual reality headsets to participate in a group discussion in a virtual space. Once in the 3-D environment, their avatars interacted with the professor.

The Knight Foundation, Miami-Dade County, City of Miami and other donors have a combined $16 million investment in MDCTech to create the college courses that will be implemented at the center, as well as scholarships for students in emerging technologies, faculty professional development and activities to support community engagement with artificial intelligence.

One room in the center is reserved for design thinking and robotics. Giorgio Corrado, a lab assistant manager, has been working with robotics at the college for three years and used the Python programming language to program Pepper, a white robot that can perform basic tactical tasks.

“We’re all using it everywhere,” she said. “We shouldn’t be afraid of learning about it. AI can support humans, not replace us.”

The AI center at the North Campus between Hialeah and Opa-locka is the first of two planned at the college. The second one will be built at its Wolfson campus in downtown Miami.

Michael Butler writes about the residential and commercial real estate industry and trends in the local housing market. Just like Miami’s diverse population, Butler, a Temple University graduate, has both local roots and a Panamanian heritage.