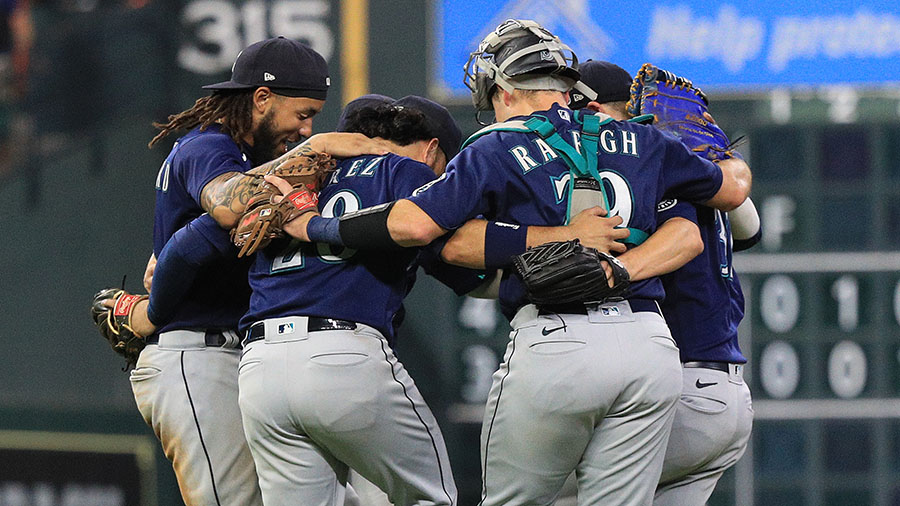 The Seattle Mariners have a date in an American League Division Series with a very familiar opponent.

Drayer: Mariners put their stamp on playoffs with signature chaos

After their two-game AL Wild Card sweep of the Blue Jays in Toronto, the M’s earned a matchup against the AL West champions, the Houston Astros. The Mariners will get a couple of days to prepare before the best-of-five series starts Tuesday at Houston’s Minute Maid Park.

The start times for all the ALDS games are not yet official, but there’s enough set to at least plan your days around the first two games. The only variable left is whether the New York Mets or San Diego Padres win the deciding third game Sunday afternoon in their National League Wild Card matchup.

We will update this post after the Mets-Padres game to reflect the official start times.

A quick look at the M’s-Astros matchup

The Mariners went 90-72 in the regular season to take the second of the AL’s three wild cards to the postseason, while Houston went 106-56, which was the best record in the entire AL and 16 games ahead of Seattle for the AL West title.

During the regular season, the Mariners went 7-12 against the Astros. Seattle did win three of the six total series the two teams played, including one in Houston. The Astros were the only team to sweep any of those series, however, doing so once in Houston in early May and then again in Seattle right after the All-Star break. The Astros won six of the last seven games they played against the M’s.

There are a couple caveats to that last sentence, though. First, AL Rookie of the Year favorite Julio Rodríguez missed three of those games, and second, midseason trade acquisition Luis Castillo did not join the Mariners until the day after the last meeting of the regular season between Seattle and Houston. Castillo, who was one of the biggest standouts of the entire MLB Wild Card round, is expected to start Game 2 of the ALDS.

Two-time AL Cy Young Award winner Justin Verlander, who is the favorite to win the award again this year, will start Game 1 for Houston, while the Mariners are expected to counter with second-year right-hander Logan Gilbert on the mound.

You may recall there was some bad blood during the season between the Astros and Mariners.

In a June 6 game, the benches emptied after All-Star Mariners first baseman Ty France was hit by a pitch. Rodríguez then homered in the very next at-bat, pushing Seattle’s lead from one run to three in the ninth inning of its 7-4 victory.

That’s just the tip of the iceberg when it comes to beanballs the two teams traded. Also notable, Mariners outfielder Kyle Lewis missed significant time with a concussion following a hit by pitch in Seattle, and Houston star Jose Altuve took one off the shoulder to start a July 31 game that led an Astros announcer to say the Mariners have “a history” (presumably for hitting batters) that “starts at the top.” For the record, the Astros hit M’s batters with a pitch 15 times this year, while Seattle pitchers hit Astros batters seven times, and never more than once in a game.

All of the ALDS games will air on Mariners Radio Network flagship station Seattle Sports and the rest of the network’s affiliates, with coverage starting with the pregame show hosted by M’s insider Shannon Drayer at least an hour prior to first pitch. Seattle Sports 710 AM will also have pre-pregame coverage, including Bump and Stacy’s The Dugout in the hour preceding the pregame show on Tuesday and Thursday.

The Mariners Radio Network broadcasts are the only way to hear M’s announcers Rick Rizzs, Aaron Goldsmith, Dave Sims, Mike Blowers and Gary Hill call the action during the postseason.

The postgame show will air for roughly an hour after each game on M’s radio affiliates.