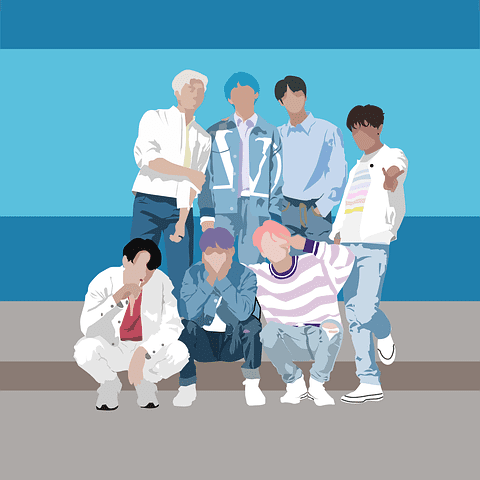 South Korea’s Melon charts show a different side of K-Pop than consumers are used to seeing on global- yet decidedly Western-oriented – platforms like Apple Music.

by Rachel Saywitz of Chartmetric

In February of last year, Spotify made its debut in South Korea, along with the launch of a global hub dedicated to the country’s most globally popular genre — K-Pop. In an announcement celebrating the hub’s one-year anniversary, Spotify claimed “the monthly average K-Pop streams worldwide reached over 7.97 billion per month, a 27% increase compared to the year before.” Along with the K-pop global hub launch was the addition of a new K-Pop Global chart, aimed at tracking the most popular songs and artists around the world. Apple Music got ahead of the game in South Korea a few years earlier when it launched Apple Music Korea in 2016, and even in its initial 2015 launch, the service knew the potential of K-Pop as a global force. On Chartmetric, you can find Apple Music’s K-Pop chart, filtered by country to show the hottest artists every day of the week on the platform.

It’s easy to assume given K-Pop’s status as a massive worldwide phenomenon that moves easily across borders — according to the International Federation of the Phonographic Industry (IFPI), it is of the most popular global genres — that its most listened-to artists and songs would be relatively consistent around the world. But Spotify and Apple aren’t the only music streaming services available in K-Pop’s home base, nor are they the most popular. Melon is South Korea’s oldest and most widely-used music streaming platform, and its most listened-to songs look a bit different than what we might see on a K-Pop chart outside of South Korea. The differences between charts on Melon and Apple Music reveal how K-Pop fits both within and outside of Korean culture, and they reflect the musical history that shaped its development before spreading to the rest of the globe.

The History of Melon

Before we take a closer look at why Melon’s chart is unique, let’s take a step back. What exactly is Melon, and how did it become South Korea’s most popular music streaming service?

Melon was founded in 2004, making it one of the oldest music-streaming services in the world — it’s older than Spotify. Created by SK Telecom, South Korea’s largest wireless carrier, Melon was established as a digital product to be promoted alongside newer cell phones that could play MP3s. In that sense, the reason for its development was quite different from a service like Spotify, which began as a small start-up as a way to develop a legal form of peer-to-peer music file sharing. It also means that Melon was explicitly a domestic product, meant for use only in South Korea alongside SK Telecom’s wireless service. And while Melon has since been bought and sold to different companies and equity firms in Asia, the service remains geared towards domestic use: there is no English version of Melon’s site, and the app is unavailable for download outside of South Korea.

We can see the impacts of Melon’s local focus in its chart, especially when comparing it to Apple Music’s US K-Pop chart. Here’s a side-by-side comparison of the two’s top 10 from three consecutive weeks: August 14th, August 21st, and August 28th.

On Apple Music’s charts, we see a familiar collection of artists — BLACKPINK takes the top spot with their recent, effortlessly suave single, “Pink Venom,” and music from BTS throughout the top 10 emphasizes that rumors of a hiatus mean nothing to the band’s dedicated fans and listeners. But Melon’s chart offers a big difference between Melon and the other two charts right off the bat: BTS — who sits at #2 in Chartmetric’s Korea Artist Rank — is nowhere to be found in Melon’s top 10.

Meanwhile, BLACKPINK only shows up once over these three weeks — on August 21st, two days after “Pink Venom” was released, the girl group currently at #1 on Chartmetric’s Korea Artist Rank didn’t even make the top 10 of Melon, debuting at 18 on the chart. And the week after, they still didn’t take the top spot, sitting below Hybe Entertainment’s rookie girl group NewJeans. Melon’s top 10 has much more variety than Apple’s: K-Pop veteran Girls Generation, temporary supergroups WSG Wannabe Gaya-G and Sa-Fire, and reliably cheerful girl-group Itzy are all absent from Spotify and Apple.

In each week, Melon’s top 10 is composed of only Korean-language songs, and of the 30 in total, just one could be classified as non-K-Pop: “Beyond Love” by laid-back hip-hop artist BIG Naughty. This confirms that K-Pop as a genre is still widely listened to in its home country.

Yet the lack of the two biggest K-Pop groups in the world — BTS and BLACKPINK— is initially surprising, especially when compared to what we see in Apple’s charts. BTS and Blackpink tracks make up over half of Apple’s top 10 for all three weeks, and of those, 68% are over a year old — a noteworthy percentage given how fast the K-Pop industry puts out new material. In stark contrast, Melon has zero BTS tracks throughout all its three weeks, only one BLACKPINK track, and none that are older than five months.

The South Korean Perspective on K-Pop

Diving deeper into Melon, we see some patterns that are worth examining: mainly that the global perspective of what K-Pop is might be different from how those in South Korea see it.

For example, let’s examine some data on the top track on Melon and Apple’s chart on the week of August 14th.

Observing these two tracks, we can see that “At That Moment” by WSG WANNABE (Gaya-G) has a very small number of playlist adds, Spotify streams, and YouTube views in comparison to BTS’ record-breaking “Dynamite.” It should also be noted that Gaya-G has no social media presence — no official Twitter, Instagram, or YouTube channel for any fans or casual listeners to follow and receive updates on.

What Gaya-G does have is a cultural foothold that can’t be fully explained with raw data, and it isn’t something that global K-Pop fans are likely to take notice of, either. The group was formed on a South Korean variety show as a sub-unit of a K-Pop supergroup, WSG WANNABE. The show, Hangout With Yoo, stars one of South Korea’s top comedians and television personalities, Yoo Jae-suk, as he explores various different careers in the entertainment industry over the course of a season. A new project that began in April of this year saw Yoo putting together this temporary K-Pop girl group of actresses and idol singers over a four month period. The broadcasting of group auditions, bonding activities, music recordings, and performances all in real-time may have built a link between viewers of the show and eventual listeners of the group’s music.

But even without the built-in listener base from Hangout With Yoo’s audience, there’s a nostalgic bent to Gaya-G that might have propelled it forward even more. The sub-unit members came from older K-Pop acts and K-Dramas, like member Lee Bo-Ram of the girl group SeeYa, which debuted in 2006, and Jung Ji-so, who made her debut as a child actress in 2012. The group’s single also hints at older forms of popular South Korean music like trot, a genre popularized in the 1960s and 70s characterized by a repetitive one-two step (called ppongjjak in Korea) and melancholic lyrics contrasted with playful instrumentals. While “At That Moment” falls more firmly in a category of sweet, effervescent folk-pop music than traditional trot, the song still evokes a sentimentality that is clearly lifted from the classic style.

The nostalgia extends to other popular songs and artists on Melon’s chart. NewJeans’ “Attention,” which followed “At That Moment” at #2 on the August 14th chart before rising to #1 for the next two weeks, is co-produced and arranged by Korean producer 250, who uses pulsing electronic ppongjjak beats in his own dance music, and extends that same time-traveling bent to his work in K-Pop — “Attention” sparkles with elements of New Jack Swing and 2000s R&B. Further down on the charts for August 21st and 28th is a new triumphant single by Girls’ Generation, one of South Korea’s top girl groups of the late ‘00s and early ‘10s who reunited last month for their 15-year anniversary.

The Global Effect of Local Trends

It should be no surprise that when comparing countries with different native languages, local traditions, and cultural products, that there are going to be major differences in how those countries view and digest those products, particularly in entertainment. But it’s still striking how South Korea’s long-standing Melon chart shows a different side of one of the world’s most global, inventive, and rapidly rising genres.

Melon’s chart leans heavily on music that was released very recently, has ties to cultural properties like variety television shows, and banks on nostalgia, visually and musically. Finding comfort in nostalgic music isn’t unique to South Korea, of course — in recent years, TikTok has helped some older music go viral on TikTok, and younger listeners are listening to songs that take inspiration from past musical eras. But knowing that this isn’t a particularly new or singular phenomenon helps explain why South Korea and the West differ in their perception of K-Pop. Songs like BTS’ “Dynamite” and BLACKPINK’s “DDU-DU DDU-DU” aren’t just songs by two of K-Pop’s megastars — they’re also tracks that significantly helped move these artists into their global stardom. Most of the listeners in Apple’s K-Pop chart didn’t grow up with these artists, or even with K-Pop. The music that they cling to represents a genre that is still just beginning to grow beyond its birthplace.