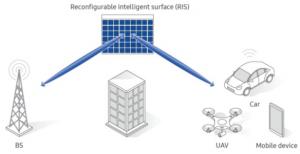 
LG Uplus has begun to test reconfigurable intelligent surface (RIS), which is considered a core technology for 6G mobile communications.

RIS is a programmable structure that can be used to control the propagation of electromagnetic (EM) waves by changing the electric and magnetic properties of the surface. By placing intelligent surfaces in the environment where wireless systems are operating, a telecom operator can control the properties of the radio channels at least partially. It can be compared to an intelligent mirror that adjusts transmission power according to radio wave characteristics. 3GPP, a global mobile communication standardization organization, is considering designating RIS as a standard 6G technology.

LG Uplus has recently teamed up with Nokia to test RIS in a mobile environment and laboratories. LG Uplus will test RIS in the 5G 3.5GHz and 28GHz frequency bands and, when verification in the 5G frequency is completed in the 5G band, it plans to test it in the terahertz band to verify the effectiveness of RIS for 6G communications.

6G services are expected to use the terahertz band, which has not been used for mobile communications. A major advantage of terahertz waves is that they have a wide bandwidth, which makes it possible to increase the data transmission speed to a terabit per second. However, their wavelength is very short, so loss can increase when waves meet an obstacle or when they are transmitted indoors from an outdoor base station. Experts say that an RIS can cover the weakness of terahertz waves by adjusting transmission power according to radio wave characteristics.