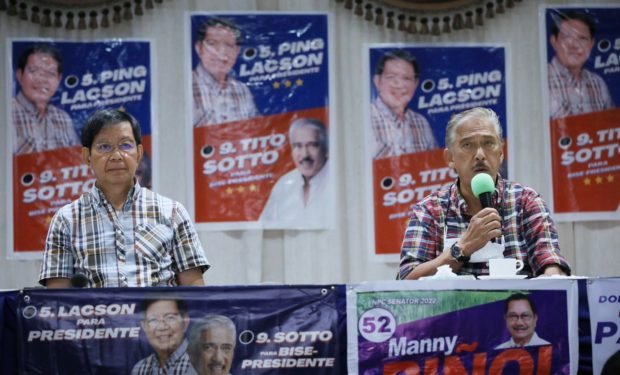 MANILA, Philippines — Presidential candidate Sen. Panfilo Lacson and his running mate Senate President Vicente Sotto III complained on Friday about the sudden change in the manner of transmitting election data and suggested it could be used for election fraud.

“It’s too early or premature to question if there is a motive behind this. But, just the same, we need to determine why there is a sudden change of protocol … especially if the integrity of our electoral process is affected,” Lacson said.

According to Sotto, the decision to change the protocol on how Smartmatic transmits the data—from 3G to 4G—could prevent auditors from tracing from which vote counting machine (VCM) it was transmitted.

Aside from the VCMs from the different voting precincts, there could be other VCMs from anywhere that could transmit data to the national level. These can be from another country, or in a hotel in Metro Manila,” he said in a presser on Friday during their slate’s campaign activity in Antipolo, Rizal.

With this, he said, election fraud “could be very easily done because we will not be able to determine which VCM transmitted the votes.”

He noted that, at first glance, it may just be an improvement in the transmission technology “[but] this is more than what meets the eye. We should really look deeper into this issue because this is vital.”

Sotto said the change to 4G transmission was reported by lawyer Ivan Uy, the IT expert representative of the Senate in the joint congressional oversight committee on the automated election system.

Don’t miss out on the latest news and information.