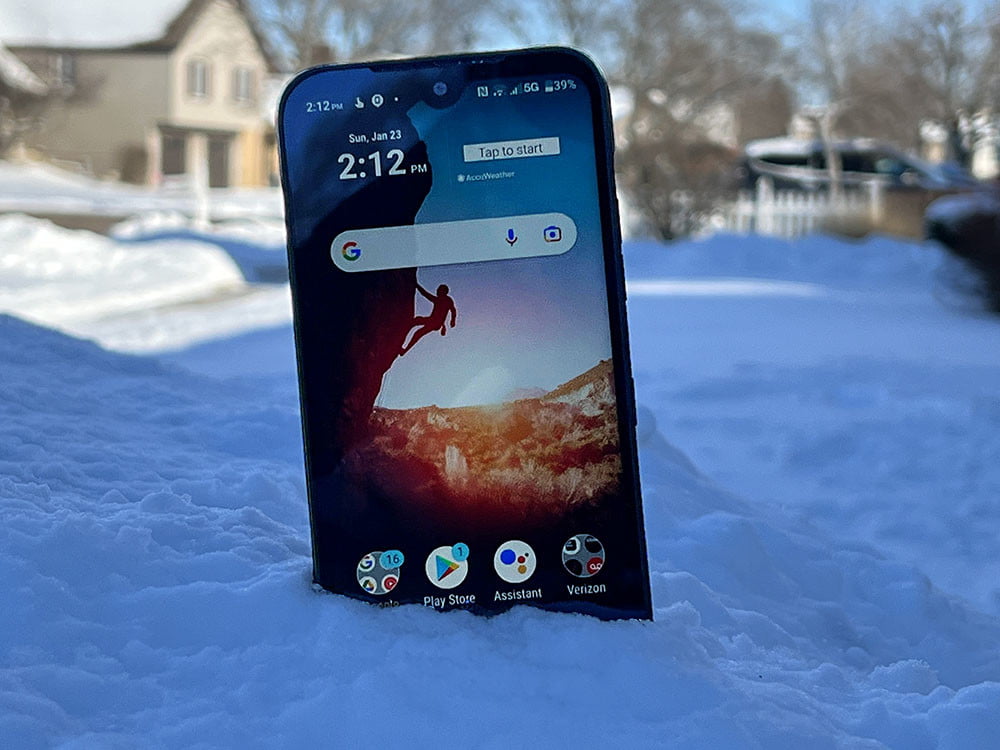 Years ago, when Samsung discontinued its line of rugged flagship phones, I felt like the world had lost a great opportunity. By then, the trend toward glass sandwiches had started, and it felt like every phone you carried had to have a case lest it slide off the table or shatter when dropped (or both). The Samsung Galaxy S8 Active was the last of the rugged flagships that made it possible to own a great smartphone that still looked good and didn’t necessarily need a case.

Since then, the rugged smartphone space has overcompensated by putting protection at a premium while seemingly going cheap on the internals. You can buy a phone like the Kyocera DuraSport 5G that can drive a nail into plywood, but can you play Call of Duty on it? That’s the main question I attempted to answer during my time with the device, along with the issue of looks.

The Kyocera Durasport 5G is a slim, and nice-looking (if a bit plain) smartphone that is extremely understated. It can withstand drops into muddy water and survive the follow-up rinse, but it just looks like a standard smartphone. It’s one that would fit just as well into a tool belt as it would the inside pocket of a suit. You don’t need to put a case on it because it’s not slippery and the phone is designed to withstand any abuse that would typically necessitate a case. It lets you carry your naked phone with pride.

Once you get inside the phone, though, the comparisons to the Galaxy S8 Active stop. The Active series of phones carried flagship specifications; basically, they were Samsung’s current flagship in a more rugged body. The Kyocera Durasport 5G decidedly is not that. Inside, you’ll get a Qualcomm Snapdragon 480 processor, 4GB of RAM, and just 64GB of storage. For reference, Call of Duty mobile alone takes up 13GB.

That said, These days it’s hard to find a phone that isn’t “good” by all measurable standards. The DuraSport 5G is no exception. This is a serviceable smartphone in many ways, even managing a session of the aforementioned Call of Duty mobile before I had to uninstall it to make room for photos.

Speaking of photos, the camera set on the Galaxy S8 Active was top of the line at the time. The cameras on the Kyocera DuraSport are, to put it delicately, not top of the line. The phone comes with a 48-megapixel main sensor and 16MP wide sensor, which is a pretty typical setup for a midrange phone. While shots are fine during the day, there’s very little stabilization going on for video. At night, I would call the camera a dumpster fire, but at least with a dumpster fire, you’d be able to see things in the frame.

The most irksome part about the camera, though, is the software. The camera app is buggy and has a tendency to freeze and/or crash. That’s not awesome when you’re trying to capture little Billy sledding down a hill. It’s also rather frustrating that this phone can handle a demanding game like Asphalt 9, but can’t snap a photo without major hiccups. For most basic tasks, the phone performs just fine, but the camera causes the phone to freak out in a way that can hopefully be fixed with a software update.

Aside from these issues, the Kyocera DuraSport 5G does pack some nice surprises. First among them is mmWave 5G. Verizon’s ultrafast 5G network comes on this phone, which is great, if you can find it. I did not have the chance to venture to downtown Chicago to test Verizon’s network for myself, but it’s a nice future-proof addition that could easily have been left off. Downtown Chicago is a place where a number of people looking for a rugged phone may work, in construction or public service as police officers, firefighters, EMTs, or anyone else NBC makes a TV series about. So the addition of mmWave is great, especially for a phone that costs less than $600.

Like many rugged phones, the DuraSport has a programmable key that can launch any number of actions or apps. I settled quickly on my usual long press for the flashlight and double press for Google Assistant pattern I usually go with. Seriously, every phone should have a programmable key.

You also get wireless charging, which, again, is a nice surprise for a rugged phone. Usually, the “hard candy shell” is too thick to accommodate wireless charging, or manufacturers just leave it out for cost reasons. Wireless charging is a feature that was also available on the Galaxy S8 Active, which brings me back around to the point of the main point of this article.

While the addition of mmWave and wireless charging are nice surprises, the DuraSport is still nowhere near being a flagship in any other respect. Yes, this is a phone a construction worker can carry on their toolbelt, but when they get home, they’ll pick up an iPhone, or Samsung phone, or some other phone that can do more than just everyday tasks and, most importantly, take photos without crashing.

While manufacturers probably assume that “people who buy flagship phones” and “people who buy rugged phones” are different classes of people, I live in the intersection of that particular Venn diagram. Once upon a time, the Galaxy S8 Active was one of my favorite phones. Here was a phone that could take amazing photos, play any game I wanted, and I didn’t have to worry about it if I fell in a river while geocaching (something that happened far too often).

Flagship phones today typically have an IP68 rating, which is great. They also tend to have the latest edition of Corning Gorilla glass on at least one side, which is also great. But in terms of durability, neither of those hold a candle to the confidence or capabilities the Galaxy S8 Active provided with its uncompromising processor and camera performance. We need manufacturers to remember that premium phones and rugged phones don’t have to be separate categories.