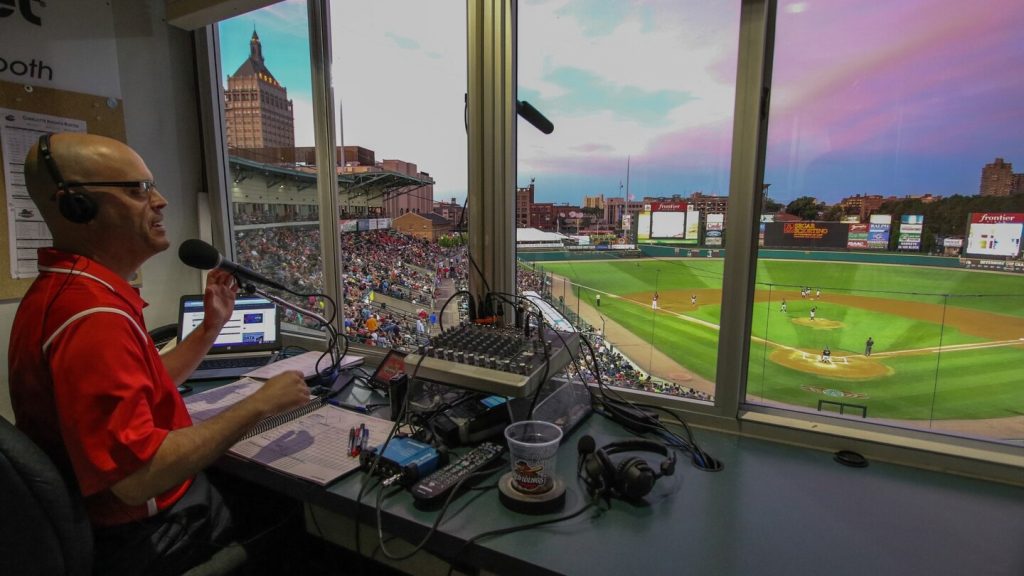 Gathering nuggets is a big part of Josh Whetzel’s job. That’s how, for the past 27 years, he’s filled dead air as a minor league broadcaster in Albany, Ga., Kinston, N.C., Binghamton, N.Y. and Rochester, where Whetzel has been since 2003. So during an interview this past weekend, while he talked about getting a few chances in the majors with the Washington Nationals this month, perhaps Whetzel knew the assignment.

Perhaps that’s why he grinned a bit.

“I’ll tell you this …” Whetzel, 50, began in the visitors’ dugout at LoanDepot Park in Miami, a few hours before the fourth or fifth major league game of his career. He honestly doesn’t count. He does know, however, that his first chance came when Mariano Rivera broke the all-time saves record against the Minnesota Twins in September 2011.

“I would bet I’m the first person to ever broadcast a big league game who only has one lung.”

But like the best nuggets, this one had a material effect on how Whetzel became a lifelong play-by-play person. When he was 17, Ganglioneuroblastoma, a form of cancer, put him through trials no high-schooler should experience: Chemotherapy. Radiation. An allergic reaction to chemotherapy that made it difficult to breathe. Then a football-sized tumor in his chest that required surgery, thus the removal of his right lung.

While he was recovering, a few of his friends contacted Dream Factory, an organization that planned trips for kids dealing with health issues. They wanted to send Whetzel to Dodger Stadium. Growing up in rural Kansas, about a mile and a half from the nearest paved road, Whetzel followed the Dodgers because his dad and uncle were big fans. They had a satellite dish in the backyard that caught Dodger games some nights. So a few times a week, they would gather around the television and listen to Vin Scully simulcast the first few innings on TV and radio.

Whetzel soon went to Dodger Stadium, met Scully and returned to a request from KLKC, the local radio station: They wanted to interview him about his experience.

“And afterward, the station manager was like, ‘You really sounded good on the air … You know, we have a part-time job on the weekends, would you like to apply for it?’ ” Whetzel recounted. “It was a sort of DJ, board ops gig. They ripped off an AP one-minute newscast and had me record it, and they hired me. I worked there for two years while I was at Labette Community College. From there, I went to [the University of Kansas] and called games. Then from there …

“From there it’s been all baseball.”

A domino effect led to Whetzel’s latest chances in the majors, doing games aside Charlie Slowes on the Nationals’ radio network. Dave Jageler, Slowes’s usual partner, took a handful of weekend ESPN radio assignments in September. Pete Medhurst, the usual fill-in, does play-by-play for Navy football, leaving the hole for Whetzel to plug. Whetzel has already done three games and is expected to have three more at Nationals Park when Washington faces the Philadelphia Phillies.

On one hand, there’s a challenge in covering players he’s unfamiliar with, like when he’d never seen Josiah Gray pitch before calling Friday’s game. But on the other, so much of the Nationals’ roster has passed through Rochester, making Whetzel an expert in their backstories. In the past two years, after the Red Wings became Washington’s AAA affiliate before the 2021 season, Whetzel has relayed the actions of Luis García, CJ Abrams, Keibert Ruiz and Cade Cavalli, among many others, to audiences in western New York and D.C.

“Minor league games aren’t always the most fun or interesting, but Josh keeps it interesting and lively,” said catcher Tres Barrera, who is with the Nationals but has played 99 games for Rochester. “I mean, I’m usually catching, but that’s what my parents have told me.”

Told of this review, Whetzel breaks into a monologue about announcers who sound bored. Sure, he admits, there are nights when you just don’t have it, when the errors pile up, when the pitcher out there won’t throw a strike and the sixth inning feels like the world’s slowest crawl.

And sure, after more than two decades in the minors, after getting so close to major league jobs — including as a runner-up to one last winter — Whetzel isn’t always excited to broadcast a Tuesday night game in a little Northeastern town. But he promises not to sound bored, no matter if he’s calling Gray in Miami or a long shot veteran in Rochester.

No matter what, there’s always a story to tell, of players chasing the same dream as he is.

“It just does sound a bit better when you’re describing major league players,” Whetzel said. “Like last winter, when I almost got that job, I sent around tape of a Stephen Strasburg rehab start with us. So this opportunity with the Nationals has really energized me. Maybe there will be another opening and the tape will be good enough. I can only hope.”