John Lynch to leave 49ers to return to TV broadcasting? 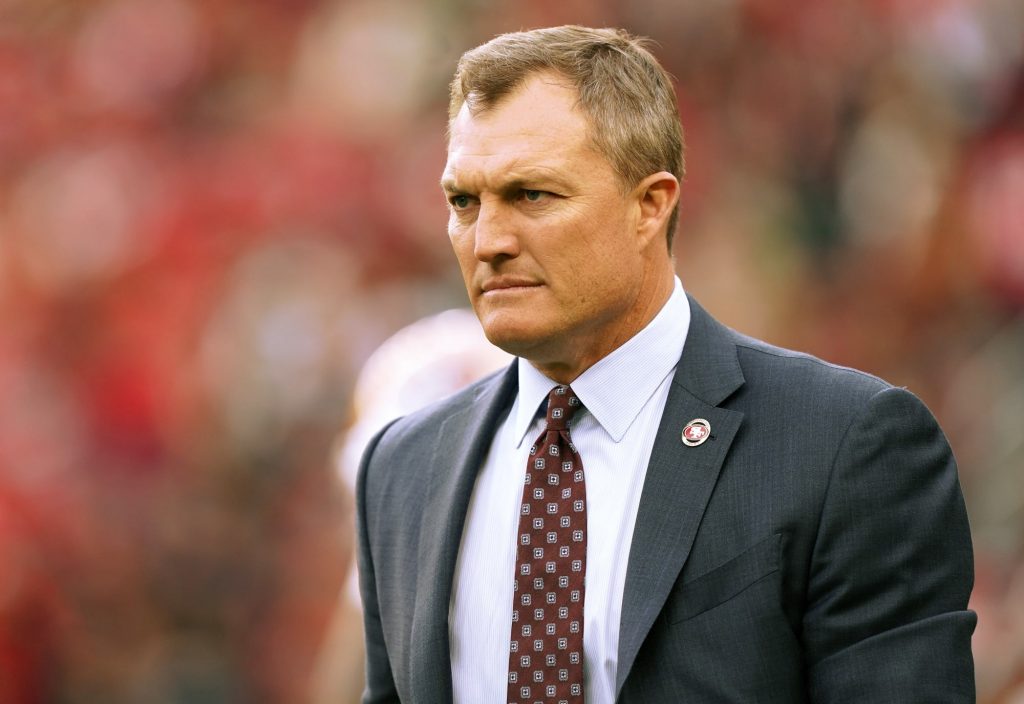 If the 2022 NFL offseason wasn’t rife with speculation already, a report suggests John Lynch could potentially depart the 49ers in a return to television.

There appears to be a chance San Francisco 49ers general manager John Lynch might not be retaining his position with the team’s front office that much longer.

It’s the NFL offseason, so rumors and speculation are going to dominate the headlines until actual events (such as the beginning of free agency and the NFL Draft) kick off, but the rumor mill is what drives offseason narratives anyway.

Of course, the Niners have been no stranger to such rumors over the last few weeks. Everything surrounding a would-be trade of quarterback Jimmy Garoppolo, Tom Brady coming out of retirement only to join San Francisco and much, much more have already dominated the headlines.

Now, Lynch is in that discussion of speculation, too.

The New York Post’s Andrew Marchand first broke the news, and he also cited Lynch as one of the potential replacements for Aikman alongside Buck:

Fox suddenly has a hole atop its No. 1 broadcast team with two Super Bowls in the next three years. Fox, however, has added depth to its NFL analyst group in recent years.

It will consider its No. 2 analyst Greg Olsen, McVay, Sean Payton and, in a twist, could try to trade for NBC’s Drew Brees, according to sources. Brees, who is in NBC’s studio, is also a candidate for Amazon on Thursday nights.

Fox will also wait if a mystery candidate, someone not apparent right now, arises. 49ers GM and ex-TV game analyst John Lynch could fall into this category for either Amazon or Fox.

Lynch previously served as a color analyst for Fox but was never relegated to Fox’s NFL Game of the Week broadcasts, as those duties were left for Buck and Aikman.

It might seem silly for a front-office executive to give up his position with the team. But the pay Lynch would be making is almost assuredly going to be more than his current salary with the Niners, and it wouldn’t have to come with the rigors of trying to assemble a championship-caliber roster on a year-to-year basis.

Lynch would also be free of having to manage most of his duties during the offseason, too, affording him the time to spend with family.

However, Lynch previously refuted any notion of vacating his GM role during his end-of-year press conference (h/t Jacob Hutchinson of KNBR 680) by saying:

I can tell you and everyone that my commitment right now is to this organization. We’re just coming off a season. My commitment is to the 49ers, the York family, to Kyle [Shanahan].

Things can change, though.

49ers would nevertheless be prepared if John Lynch was to leave

Money speaks, and Lynch has already cemented himself as an excellent TV personality, which made his transition into San Francisco’s general manager role that much easier, a far cry from the standoff-ish persona former GM Trent Baalke had in the years preceding Lynch.

However, some have argued Lynch was much more of a public face of the franchise and not so much involved in the actual roster creation since taking over the role in 2017, instead those duties were relegated to Shanahan and assistant general manager Adam Peters.

There was a concern Peters might seek a bigger role as another team’s full-time general manager during the offseason, yet Peters remains Lynch’s No. 2 guy.

Should Lynch depart, the expected move would obviously be Peters receiving a promotion and staying within the organization.

Although Peters is much less savvy a media personality, yet few would care as long as the 49ers roster remained intact and continued to improve.

Either way, it still doesn’t sound like Lynch’s departure is imminent. But the fact it’s being talked about is telling enough.