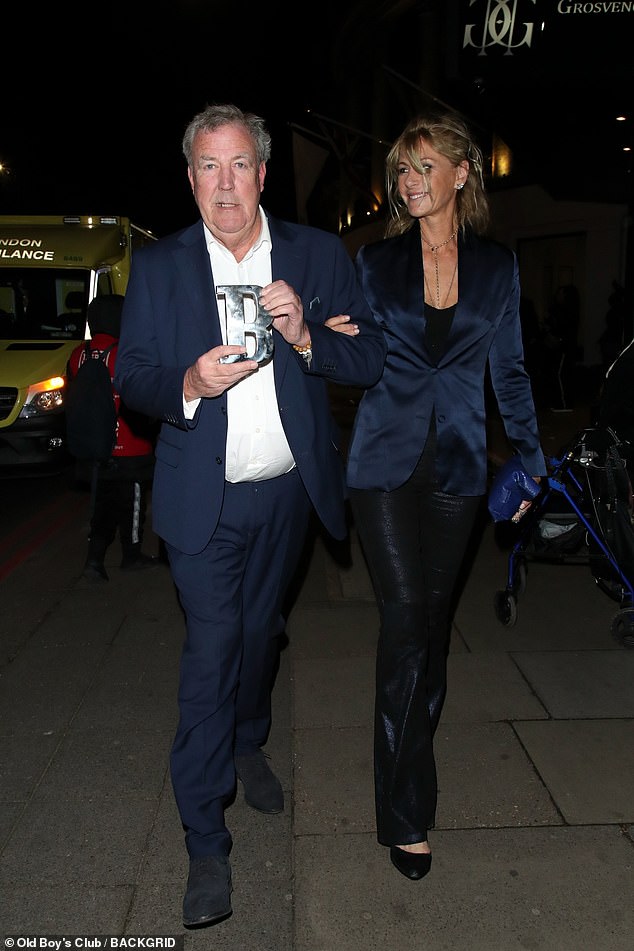 Jeremy Clarkson looked delighted as he left the Broadcast Awards 2022 alongside glamorous girlfriend Lisa Hogan – after scooping a gong for Clarkson’s Farm.

The television star, 61, held the silver B-shaped gong up for onlookers to see as he departed the bash after the show triumphed in the Best Popular Factual Programme category.

Star of The Grand Tour, Jeremy, looked dapper in a navy blue suit which he wore with a white shirt and black shoes.

Champion: Jeremy Clarkson looked delighted as he left the Broadcast Awards 2022 alongside glamorous girlfriend Lisa Hogan – after scooping a gong for Clarkson’s Farm

His girlfriend Lisa, 48, wore a navy blue jacket in a similar shade to her man’s suit and a pair of black trousers.

She opted for a pair of pointed black high-heeled shoes and walked arm-in-arm with Jeremy as they left the event.

Taking to Instagram, Jeremy shared a clip of the moment his show was announced the winner of his category. 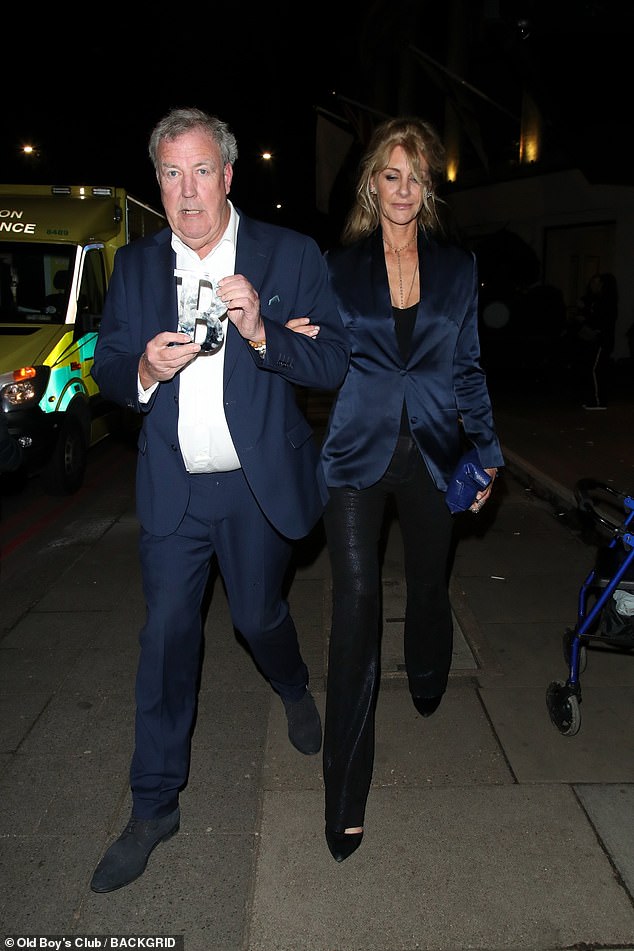 Big time: The television star held the silver B-shaped gong up for onlookers to see as he departed the bash after his Amazon Prime Video show Clarkson’s Farm triumphed

A member of his production team could be seen jumping up from their seat and waving their arms in the air in celebration after learning of their triumph.

It comes after Jeremy was seen kissing Lisa in a picture released this month ahead of series two of Clarkson’s Farm. 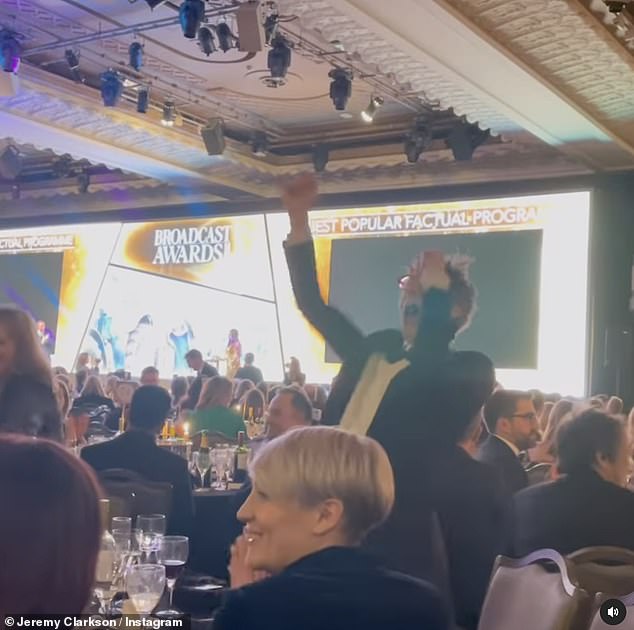 Celebration: A member of his production team could be seen jumping up from their seat and waving their arms in the air in celebration after learning of their triumph 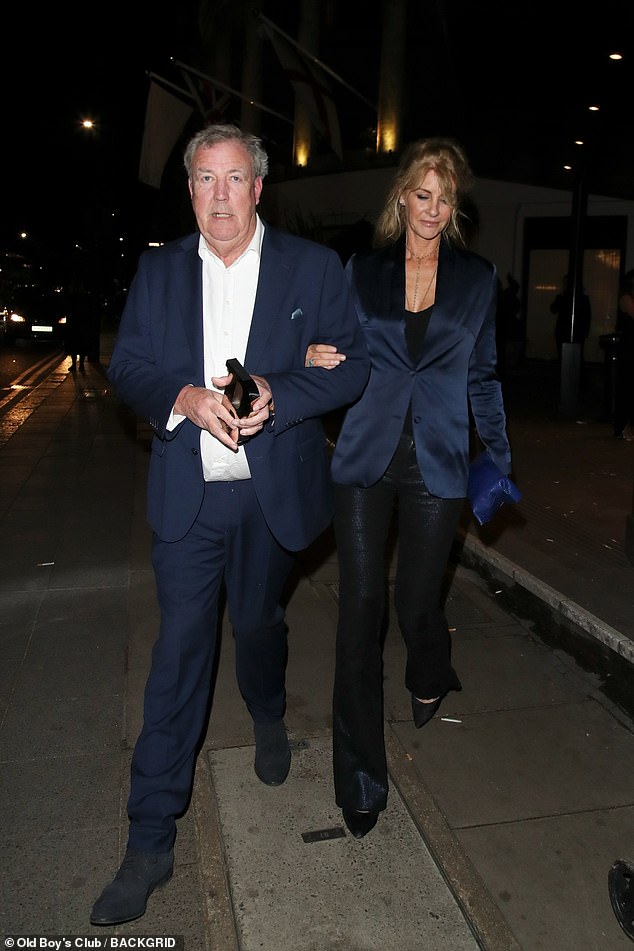 Out on the town: Jeremy’s show won in the Best Popular Factual Programme category at the bash which took place at the JW Marriott Grovesnor House Hotel 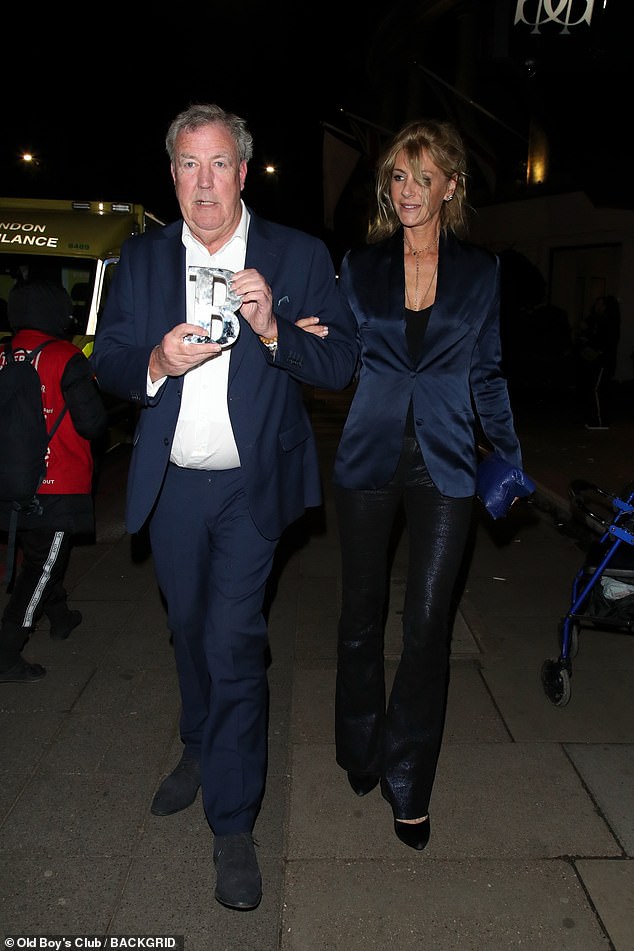 In style: Star of The Grand Tour, Jeremy, looked dapper in a navy blue suit which he wore with a white shirt and black shoes 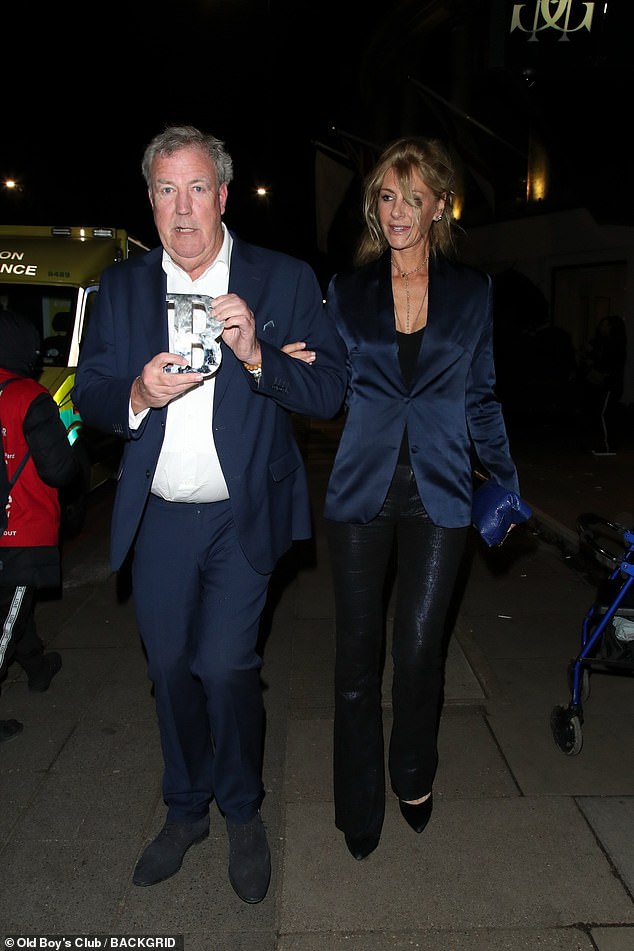 Glamour puss: His girlfriend Lisa wore a navy blue jacket in a similar shade to her man’s suit and a pair of black trousers

Farmhand Kaleb Cooper could be seen awkwardly averting his eyes while on Diddly Squat farm in the first look snap.

Jeremy has been filming for Amazon Prime Video’s smash hit programme since last year and the cast, including girlfriend Lisa, sidekick Kaleb, 23, land agent Cheerful Charlie Ireland and ‘head of security’ Gerald Cooper, will be back on screen.

In another picture, Jeremy gives a thumbs-up as he sits in his Land Rover with Cheerful Charlie and Gerald standing alongside him. 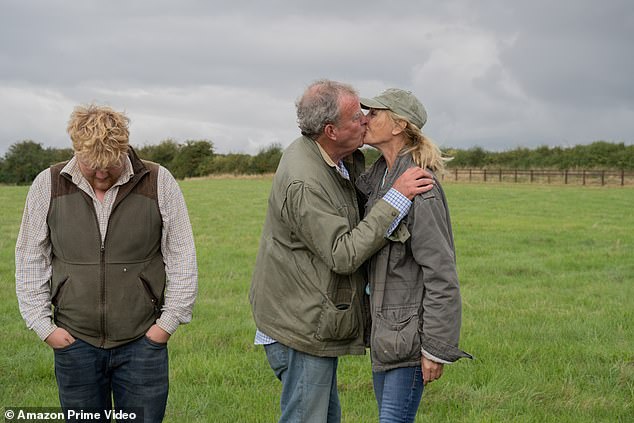 Meanwhile, Jeremy can be seen driving his tractor in one other image while Kaleb casually lays in the shovel at the front.

The clan once again keep a watchful eye on Jeremy and his agricultural antics in Chipping Norton, Oxfordshire in the new series.

Jeremy previously said he is ‘delighted’ to be back with another series, which will follow him trying to diversify and expand his agricultural knowledge with the help of his no-nonsense farmhand Kaleb. 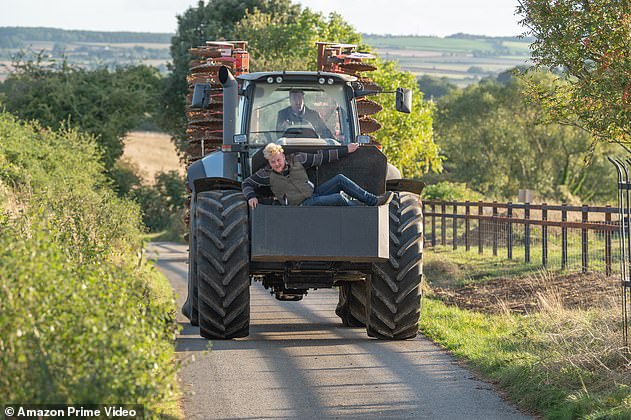 Agricultural antics: In a comical image, Jeremy can be seen driving his tractor while Kaleb casually lays in the shovel at the front

In a video, the former Top Gear host said: ‘Following the success of the first series, I’m delighted to say that there will be a second series of Clarkson’s Farm.’

To which Kaleb interrupted: ‘You mean, Kaleb’s Farm?’

Jeremy continued: ‘No. The big team are back, cheerful Charlie, Lisa, Gerald and the fetus in the tractor.’ 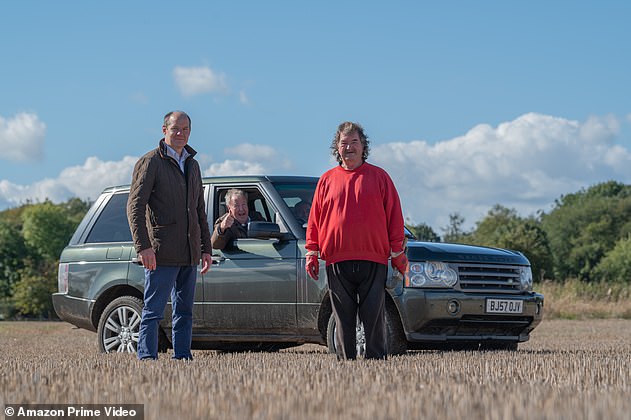 First look: Jeremy and his Diddly Squat farm friends are reunited in the upcoming series two of the show, with new pictures being released on Tuesday

The first series of Clarkson’s Farm followed an intense, backbreaking and frequently hilarious year in the life of Britain’s most unlikely farmer, Jeremy.

The success of the show was such that fans spent up to four hours queuing outside his new farm shop.

Clarkson bought the plot of land in 2008 and Clarkson’s Farm follows the presenter’s highs and lows of tackling the 1,000 acre working farm.

Viewers saw Clarkson and his rag-tag band of agricultural associates contend with the worst farming weather in decades, disobedient animals, unresponsive crops and an unexpected pandemic.

The presenter recently revealed he was ‘the happiest he has ever been’ and that he ‘loved every second’ of filming the new hit show. 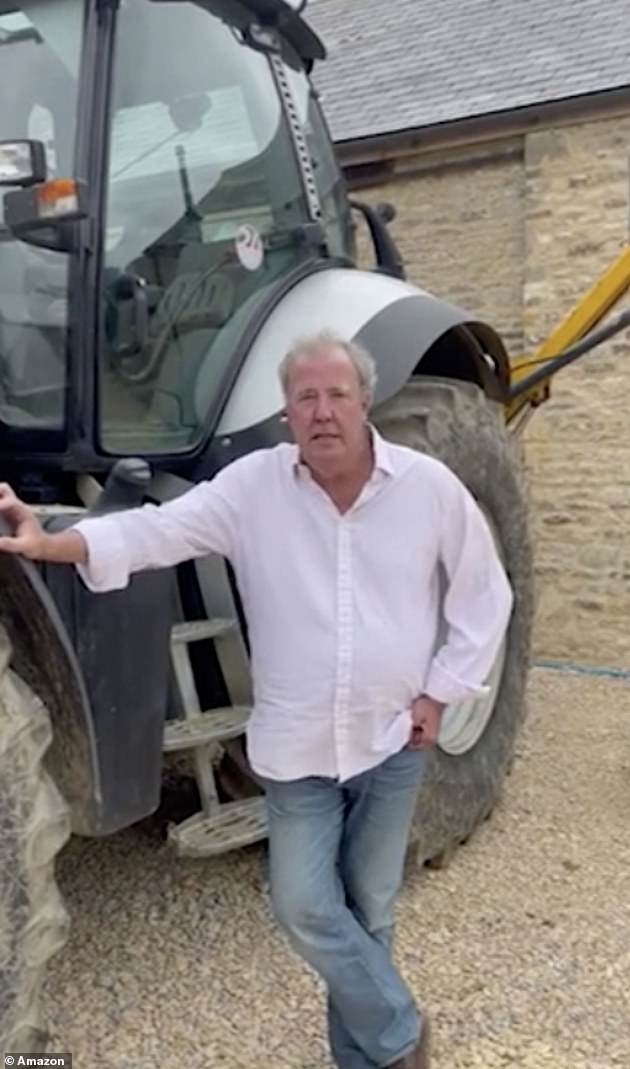 The Rubbish World of Dave Spud

We Are Lady Parts

Murder, Mystery and My Family

I’m A Celebrity…Get Me Out of Here!

Too Hot To Handle

Meet The Khans: Big In Bolton

Day in the Live: Wizkid

Joe Lycett’s Got Your Back

Roald & Beatrix: The Tail of the Curious Mouse

Hair Power: Me and My Afro

Inside Chernobyl with Ben Fogle

TIMELINE TV MOMENT OF THE YEAR

An Audience with Adele – ITV

I’m A Celebrity, Get Me Out of Here – ITV

The Beatles Get Back – Disney+

Damilola: The Boy Next Door

I’m A Celebrity… Get Me Out of Here!

54 Days: China and the Pandemic

Undercover in the Schools that Chain Boys

In The Footsteps Of Killers

Krept & Konan: We Are England – WINNER

Go Green with the Grimwades

World According to Grandpa – WINNER

Inside Chernobyl With Ben Fogle

EMERGING INDIE OF THE YEAR

CHANNEL OF THE YEAR