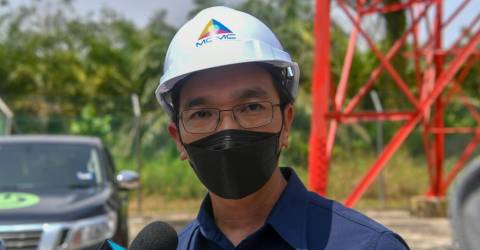 SIBU: The implementation of the National Digital Network (Jendela) Phase One (2020-2022) in Sarawak will help drive the state government’s aspiration to achieve developed status by 2030.

Therefore, he said, it was important to provide digital infrastructure which is extensive and of quality to support the state government-driven initiative, especially in the implementation of digital economy initiatives such as the SPayGlobal (Sarawak Pay) e-wallet application and Kuching Smart City.

“It is important that we provide a network with suitable coverage and speed for the people,“ he told Bernama after a site visit to the Simpang Ulu Bayan telecommunication tower in Mukah, which is located 180 kilometres from Sibu town here, recently.

In November last year, the federal government announced an allocation of RM4.09 billion for Sarawak to implement phase one of the Jendela initiative, to expand and improve broadband services and also for the transition to 5G technology.

Adiman said that Jendela phase one involved four main components, namely the expansion of fibre optic coverage to premises, the construction of new 4G towers, the upgrading of transmitting stations to 4G technology and the provision of broadband services through satellite technology.

For the construction of new 4G towers, he said that the plan was to build 824 towers, and thus far 82 have been completed.

“The remaining 742 towers will be completed in stages, starting this year until the third quarter of 2023,“ he said.

Apart from that, Adiman said that fibre optic coverage had reached 76,000 residences and businesses, and the rest would be completed this year.

He said that the target for Jendela phase one is to have 116,096 premises covered by fibre optic access.

As for broadband services through satellite technology in areas previously not covered, he said that 523 locations were planned under Jendela phase one, of which 464 locations have been covered, while the rest would be completed before this May.

Commenting on the 3G telecommunication tower in Simpang Ulu Bayan, Adiman said that it was to have been upgraded to 4G in 2020, but only 2G and 3G services were available at that time.

However, underJendela phase one, the tower was finally upgraded to 4G earlier this year, covering more than 10 longhouses, to benefit about 1,000 residents in the area, he said.-Bernama