Is FOX Starting a Trend of Hybrid Broadcasting/Streaming? 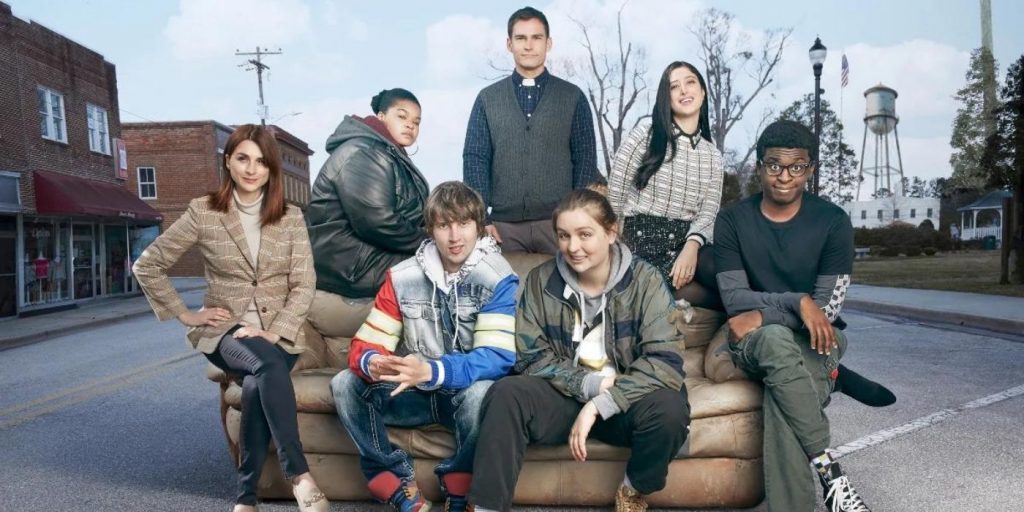 FOX’s experiment with its new mockumentary comedy, Welcome to Flatch, may help bring the streaming audience back to broadcast television.

FOX is trying something new with its mockumentary sitcom Welcome to Flatch, and it could be beneficial to other networks to see if it pans out. While it’s common for networks these days to have joint releases with streaming hubs such as Netflix or Hulu, usually episodes don’t move to streaming until well after they’ve aired on broadcast television; or in Hulu’s case, the streaming service plays the episode live along with regular cable services with added subscription fees.

In the case of Flatch, FOX decided to release the first half of the series on Hulu all at once while also airing the episodes in their usual weekly broadcast times. FOX executives and creators of the series, while aware that this new type of release may appear to initially hurt the series’ ratings, are hoping that audiences who choose to binge watch the first seven episodes will become invested enough to finish out the season as regular weekly broadcast viewers. This release method gives their audiences a chance to fully test the “product” before deciding to commit as opposed to getting just a small taste had FOX only offered the pilot on streaming in tandem to their broadcast release.

RELATED: The Best Movies & TV Shows to Watch on Netflix This Weekend

Despite the show ranking lowest on FOX’s charts during the week of its release, it’s still too early to tell whether the network’s strategy will pay off. Creators believe the style of Flatch, with its drier humor and slow introduction of the characters, requires viewers to sit through a few episodes before they become attached to the fictional town of Flatch and the people the series pretends to document. As opposed to following the age-old rule of hooking audiences early on, the network is banking on viewers being just curious enough to continue clicking through the episodes to see if they can gain and maintain interest in the story. While certainly a gamble, it could pay off in the long run if the seven episodes can manage to hook their viewers.

FOX is most likely also counting on the fact that joint streaming and theatrical releases that became standard during the COVID-19 shutdowns weren’t overly detrimental to the film industry. The success of Dune’s joint release proved that both platforms could function with great success simultaneously, with audiences filling theaters the week of the premiere as well as ratings being extremely high on HBO where the movie streamed for at-home viewers. However, the success rates of joint-released films were still dependent upon the quality of the film itself, as the highly anticipated The Matrix: Resurrections failed to impress fans of the film series both in theaters and online. This means if Flatch viewers can’t connect with the story within the first few episodes, there’s still a high probability that the series will fail.

RELATED: Dune’s Denis Villeneuve Explains the Positive Side of His Oscar Snub

Whether or not the show manages to attract and maintain an audience, the experiment is still one to keep an eye on. If the ratings stay low or steady during the first seven weeks of broadcast, but jump even a small amount come the eighth episode when streamers are forced to continue the series in real time, it could be proof that FOX’s hybrid method did actually work. If the numbers fail to change come the second half of the season, or if they continue to drop, then either the experiment didn’t work at all or the show simply didn’t garner enough interest to keep a regular audience.

If it does succeed, FOX or other networks may try the tactic again with a less risky series, potentially gaining back viewers who may have long since abandoned broadcast television strictly for streaming services. In this sense, broadcast and streaming television could become symbiotic of one another, altering the way viewers consume television yet again. It could very well be that streaming media, the very thing that is said to be killing off basic network television, may be the one thing that can save it.

Alex has been invested in film and television from a very young age, often spending hours in the theater just to make sure she viewed every film that was currently out. She began writing as a volunteer journalist for small entertainment blogs as a teen where she often used her own money to travel to such events as the Austin Film Festival, the Emmy’s, and several television set visits. She moved to Los Angeles in order to pursue more options in the film and television world where she was given an opportunity to write and sell a full webseries, has often worked as writer or production assistant on many independent film sets, and served as Chief Editor and writer for the Colaborator blog – a business that helps connect filmmakers to businesses in need of content.

Some of Alex’s favorite films are essentially anything in the MCU, Robin Hood: Prince of Thieves, The Losers, and Mission: Impossible – Ghost Protocol. Favorite tv shows include Buffy the Vampire Slayer, Avatar: The Last Airbender, The Magnificent Seven, and The Witcher. Favorite comics are The Losers, anything Fantastic Four, and the entire Hawkeye vs. Deadpool arc.

Other hobbies include needle felting, karaoke, writing or reading fanfiction, board games, and nerding out with her friends in a session of D&D or Shadowrun.