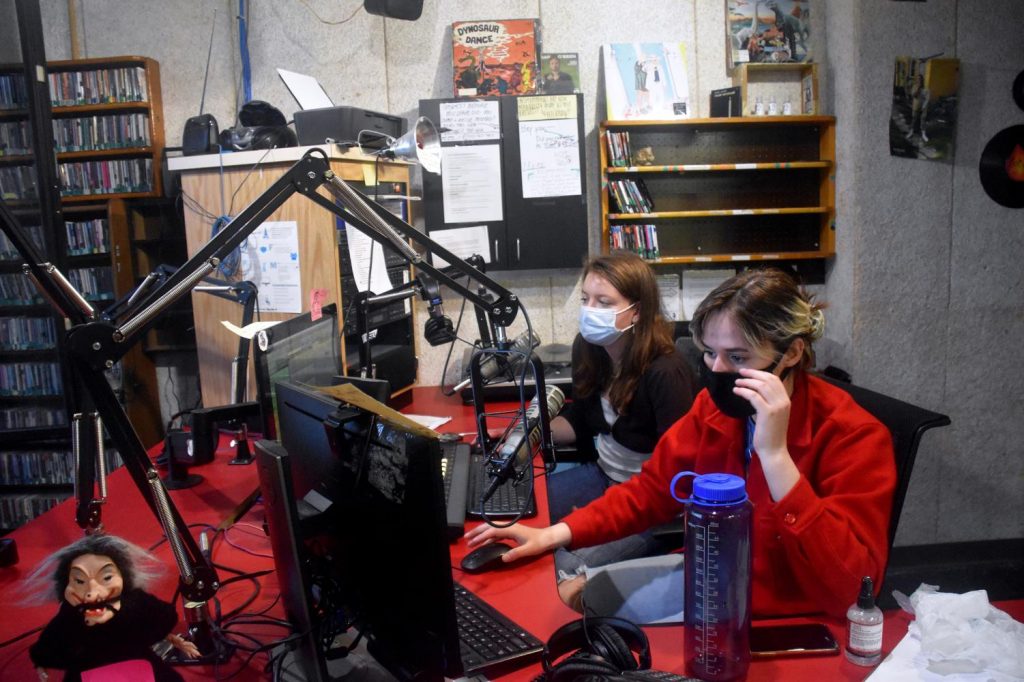 With 20 more hours of broadcasting ahead of her, senior urban planning major Olivia Marlowe leaned into the microphone Friday evening and spoke.

“Welcome back to the WPTS winter marathon,” Marlowe said. “We’re on our, what, fourth hour?”

“Fourth of many. Everyone in this room looks like they’re falling asleep,” Beach said. “Hey! Wake up!”

WPTS Radio, Pitt’s student-operated radio station, broadcasts from the William Pitt Union and transmits from the top of the Cathedral of Learning on 92.1 FM and iHeartRadio. They run creative content around the clock — primarily alternative music, but also specialty programming including DJs, sports and other radio shows. The staff hunkers down each year to broadcast for 24 hours for their annual winter marathon.

The schedule for this year’s marathon included a hodgepodge of offbeat segments, featuring a video game tournament, speed dating, conspiracy theories, a Wikipedia deep dive, dramatic readings of Garfield comics, Craigslist missed connections, a non-legally binding wedding and other content as the marathon progressed into the late night and early morning.

Michael McMahon, a first-year education major, said WPTS took a different approach to the marathon than in recent years.

“In years past … there’s always been a theme,” McMahon said. “But [this year] there is absolutely no theme. It’s like chaos. Every hour is something completely different … A lot of things are just stuff we already do in the station for fun, we’re just broadcasting it.”

The WPTS studio is tucked in the WPU’s fourth floor and opens its doors to reveal a pocket of indie idiosyncrasies. Eclectic and outlandish decor and memorabilia adorn the office, with an assortment of alternative band posters and pop culture imagery lining its walls alongside shelves of CDs and vinyl records. Dozens of fatigued, yet caffeinated, staffers called the studio home during the marathon.

Krishna Amin, first-year chemistry student, sits at the soundboard and waits for a group from 1Hood Media to go live at WPTS Radio during the 24-hour winter marathon from Friday to Saturday.

Sonya Boukengolts, the WPTS program director, said the winter marathon is a cherished tradition at the station.

“I did [the marathon] two years ago, right before COVID, and it was singlehandedly the best radio event I’ve been to. I popped in at 3 a.m. and witnessed an awesome techno electronic set from a radio alumna, Angelo,” Boukengolts, a junior environmental engineering major, said. “It was an absolute blast – you simply can not go wrong with a late-night dance party.”

A full rotation of the Earth is a long time to broadcast. Boukengolts said an unorthodox array of content and activities helped them pass the time in the studio.

“The marathon is all specialty content made by us. Some of it is music-related, hours with fun themes like guilty pleasure songs and then there are games like Family Feud and trivia,” Boukengolts said. “One of the directors knows someone who works at Hot Ones, so we’ll be doing that as well. There’s also a variety of live shows, [like] Quiet Hours, 1Hood, and Alvin Row.”

The marathon included three in-studio performances by local Pittsburgh artists. Among them was Quiet Hours, a band of six Pitt seniors, who performed in the eighth hour. Gabe Field, the band’s guitarist, said the band was excited to be a part of the marathon.

“It’s great to be able to share our music on the radio station,” Field, a senior English literature and philosophy major, said. “We’ve been gigging around all year, playing different house shows and venues, and we just finished recording a new album. It’s great to play some songs off that new album and share with everybody.”

Creating the marathon program by program was no small task, McMahon said.

“It’s a huge group effort. We’ve been planning this forever, because obviously you need 24 hours of programming, so we were taking submissions for ideas and brainstorming,” McMahon said. “There’s a lot of people involved. I’m going to try to be there for the whole 24 hours if I can.”

Across the 24 hours, the studio was awash with antics, both on and off the air. As the microphones switch off and a song begins, listeners might hear Weezer’s “Buddy Holly” but be completely oblivious to the staff unabashedly singing along. Listeners may have caught Alvin Row’s experimental electronic performance, but not hear the silent steps of staffers dancing to the sound, succumbing to sleep-deprived delirium.

Everyone involved had a blast, McMahon said, but the marathon serves a greater purpose than just fun for the station.

“A lot of people you talk to don’t know WPTS exists,” McMahon said. “In a lot of ways, I think it’s sort of a publicity thing. I don’t expect anyone to sit down and listen for 24 hours, but if they hear that there’s this crazy marathon going on, maybe they’ll tune in for an hour or two.”

Boukengolts said the marathon encouraged staffers to get creative.

“The marathon is a really easy way for any staffer to influence a piece of content with very little preparation or commitment, and the hope is this will help more people fall in love with making their own fun custom content,” Boukengolts said. “This also opens up our station to a ton of different personalities and this always leads to fun wacky and unexpected content. It’s truly the best.”

Around noon Saturday, exhausted staffers shuffled out of the studio and crashed in their beds. At the end of the day, McMahon said, much of the marathon’s appeal came down to the staff’s enjoyment.

“Any time is fun if you spend it with great people doing stuff you like doing,” McMahon said. “Twenty four hours of that sounds like a great time.”