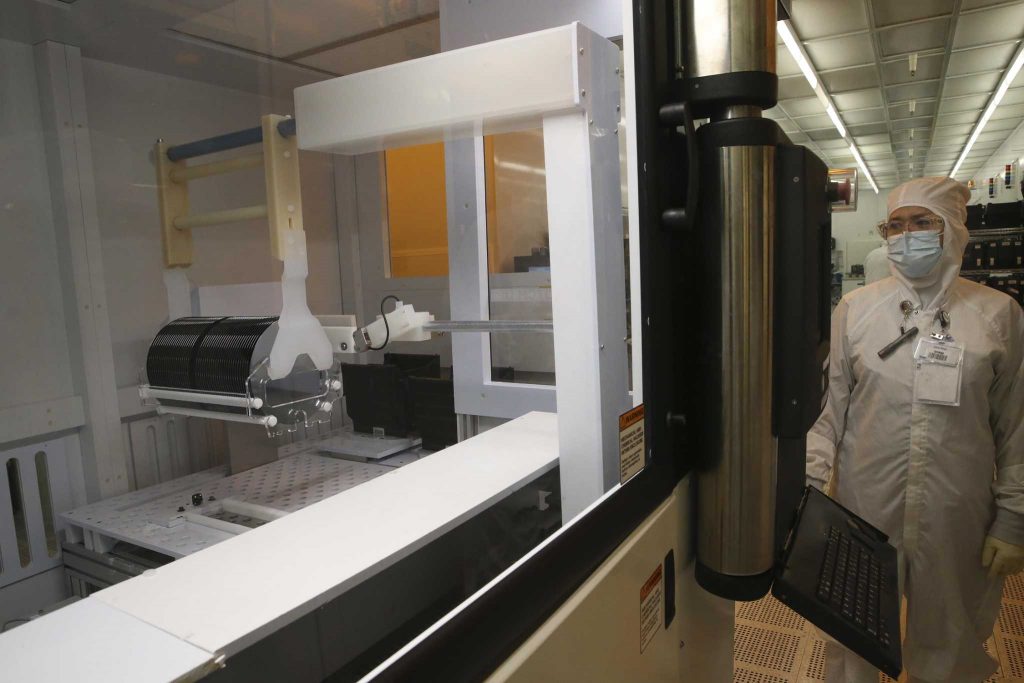 Known as a fabrication facility, or “fab,” it annually turns out about 500 million microelectronic circuits that make vehicles, laptops, cellphones and digital devices work. It produces chips for customers in the aerospace, automotive, mobile communications and health care industries.

Tower, which operates eight fabs around the world, bought the San Antonio facility from California-based Maxim Integrated in 2016 in a stock transaction valued at $40 million.

Manufacturers are scouring the globe for chips, and Tower is one of the beneficiaries. In November, the company reported third-quarter revenue of $386.7 million for all of its operations, up 25 percent from $310 million the year before.

About 440 of its local employees pull 12-hour shifts, three or four days or nights in the plant per week. Many of Tower’s entry-level operators, technicians and engineers have degrees from community colleges and universities in Texas. Some hail from Massachusetts Institute of Technology, University of California, Berkeley and Cambridge University.

Making computer chips is a long, laborious process. Workers layer chemicals on silicon disks, etch them, implant ions to change the conductivity, or flow of electricity, in the silicon, and polish, heat and test the products, known as wafers. It takes two to three months to make 25 wafers.

On a recent Friday afternoon at the San Antonio facility, Rohn Rao, outfitted in a white protective suit, walked into a dust-free, climate-controlled “clean room” where a Canon FPA 3000 i4 Stepper used light-sensitive materials called “photoresists” to layer patterns, or “blueprints,” onto black wafers. These look like vinyl records.

A nearby Lam Research machine sprayed chemicals on a batch of wafers — which carry 200 to 10,000 chips each, depending on customers’ specifications — to remove metals, oxides and nitride.

Rao, 59, said he moved to Texas from India to earn an associate degree in psychology at San Antonio College. A friend encouraged him to apply for a job at the plant in 1995, and he went for it. He began as an operator and was promoted over the years to trainer, lead operations manager and now sector manager in the 80,000-square-foot Building 1.

Every workday, Rao steps into a pair of dust-free boots and pants, and pulls on a jacket and head cover, made of polyester. He then walks into an “air shower” that blasts away particles.

“We can’t have anything land on the product, not even an eyelash,” Rao said.

In the clean room, where the temperature is held at 68 degree and humidity at 25 percent, he stood among technicians, also masked and suited, as they labored under dim yellow lights. The floor was pockmarked, and a high-efficiency air-filtration system hummed in the background, recycling oxygen six times per minute.

“On my first day, I thought, ‘What the hell am I doing here?’ But now, I’m home in this environment,” Rao said.

Human resources director David Moss was on hand. Looking over the machinery, Moss, a 43-year-old son of an Iowa auto mechanic, said he’s fascinated with “the magic of making semiconductors.”

Tower, a publicly traded company, operates two fabs in Israel, three in Japan, and recently announced it will open another in Italy under a joint venture. It employs about 5,500 workers, and has sales offices in China, Korea and Taiwan.

In the U.S., the manufacturer runs a fab in Newport Beach, Calif., in addition to its San Antonio operation. Locally, Tower is the only chipmaker in town.

Early in the pandemic, major automakers anticipated a drop in sales, closed their factories for weeks and canceled their orders for chips. In the meantime, makers of consumer products gobbled up chip supplies as homebound workers increased their online shopping. They bought a lot of laptops, video game systems and other electronics.

By the time automakers came back online, they faced a shortage of computer chips. The timing was terrible, with many buyers wanting to spend their stimulus checks on vehicles.

The shortage of chips put a dent in manufacturing of all kinds, but it hit especially hard for automakers such as GM and Ford. (Tesla, the Austin-based electric vehicle maker, was one of the exceptions. Instead of closing shop, CEO Elon Musk had workers grab available chips and rewrite software.)

Tower is benefiting from automakers’ and others’ global hunt for chips. In November, Tower CEO Russell Ellwanger estimated that fourth-quarter revenue would reach $410 million, up 19 percent from a year ago.

The company is currently focused on making chips to improve radio frequencies in 5G phones and electric vehicles’ battery-management systems.

“The demand is fantastic to have, but the shortage is not so fantastic for our customers,” said Marco Racanelli, a senior vice president at Tower and general manager of the company’s Analog Business Unit in California. “We’re growing and investing very heavily to increase our manufacturing footprint to be able to over time mitigate supply shortages across the industry.”

Tower was built on buyouts.

In 2020, nearly four years after its San Antonio acquisition, the company was renamed Tower Semiconductor. Last year, the chipmaker partnered with STMicroelectronics, a Switzerland-based firm, to eventually make semiconductors at a fab in Italy. The facility is under construction.

To understand how they work, take out your smartphone. It uses an antenna to send wireless signals to a base station. To send these signals, the phone needs an electrical current driven into the antenna at high frequency.

“It’s driving those macroscopic signals that differentiate (Tower’s) chips from the scaled-down chips that are doing the computing with small amounts of power,” said Racanelli, who holds a doctorate in electrical engineering from Carnegie Mellon University. “The chips must be able to handle tiny signals while feeding and protecting the processors, which are fragile relative to the real world of a battery.”

In Israel and Japan, the company makes chips for image sensors, primarily for industrial cameras, as well as medical and dental X-ray machines. It also builds high-speed components for telecommunication companies.

The San Antonio fab has roots in the automotive and mobile-communications industries.

A big part of the business here revolves around making radio-frequency wafers used in mobile handsets. The facility also produces chips for batteries in handsets, laptops and cars.

Racanelli said Tower is looking to expand in the U.S. and internationally to meet current chip demands — and in anticipation of a big increase in electric-vehicle production and advances in cellphone technology. Bumping up cellphones from 4G to 5G requires 40 percent more analog chips.

“This is an inflection point,” Racanelli said.

Tower is weighing U.S. expansion plans as Congress looks to foster the construction of more domestic fabs — to meet future demand and reduce the country’s reliance on semiconductors from other countries.

The White House is backing the bipartisan Creating Helpful Incentives to Produce Semiconductors for America, or CHIPS, Act. The legislation would deliver $52 billion in subsidies to chip manufacturers to build plants in the U.S.

The Senate passed the legislation in June as part of the national defense budget. But the bill has stalled the House of Representatives.

Racanelli said Tower supports the CHIPS Act and “has been very vocal and active on our intent to potentially use some of that U.S. help to expand in the U.S.”

He also said the San Antonio fab “would be the easiest place for us to expand.”

In a follow-up email, Tower spokeswoman Orit Sharar said the company has been eyeing San Antonio for a possible expansion, but a lot depends on passage of the legislation.

“We are active in the CHIPS Act, and if there will be anything relevant, we may consider to expand our presence and manufacturing capabilities in San Antonio,” she wrote. “Currently, there are no concrete plans for it.”

Texans aren’t the only ones courting the manufacturer.

Last month, Senate Majority Leader Chuck Schumer said he put in a “personal call” to Ellwanger. The New York Democrat said in a news release that he “made it clear to Tower that I strongly support locating their new semiconductor chip fab in New York.”

Schumer said Tower had been considering New York, along with several other states, “for a new $5 billion semiconductor fab plant that would create up to a thousand jobs.”