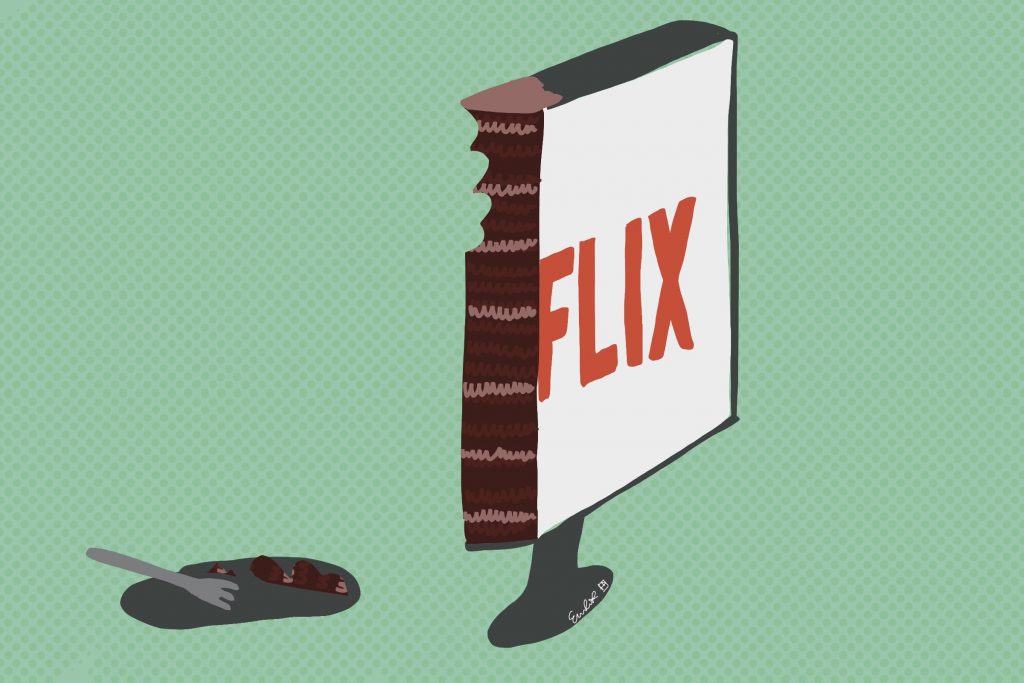 Every once in a while, in the midst of one too many underwhelming Netflix Originals, a hidden gem floats above the rest and breaks into the consciousness of mainstream culture. We’ve seen it most recently with “The Queen’s Gambit,” “Bridgerton” and “Squid Game.” Such is not the case with the Netflix original series, “Is It Cake?”

From the title alone, you can probably guess the premise: a baking contest in which skilled contestants attempt to disguise cake as ordinary objects, a play on the once wildly popular meme. You can probably also pick up on the thinly veiled desperation for pop culture relevance (using a two-year-old meme may not have been their best move). How did Netflix come to the conclusion that this was a worthwhile endeavor? And is this what people genuinely want to watch? Or what internet-entrenched streaming services think we do through the guise of online conversation?

I keep trying to pinpoint it — the moment when streaming services became indistinguishable from internet discourse of TV itself. They’ve been around for some time now, as Netflix arguably cemented itself in the mainstream wave in 2016, coinciding with the unparalleled phenomenon that was “Stranger Things.” Yet it wasn’t until they started to have an online presence outside the traditionally promotional functionality that it began to feel so gratuitous. From Prime Video’s unceasing flow of Adam Driver thirst tweets to Netflix plugging its own content so much on their social media, I get actively turned off from tuning in. It’s not exactly something you can opt out of either, as advertisers slip posts into your feed whether you like it or not.

Perhaps it is objectively weird for corporate social media accounts to refer to themselves as “besties” or engage in fan behavior on behalf of their respective products, but is anyone really surprised? They’ve stepped well beyond the threshold of traditional advertising and into a realm of false engagement with the audience. It purposefully shrouds powerful corporations with a façade of digital personhood, capitalizing on the blurred parasocial nature of social media.

It’s worth noting that part of this disconnect is due to the fact that a social media manager’s role is far, far different from a CEO’s. Yet in online interactions, they effectively become an extension of the company itself, creating a conflicted dichotomy in the public eye. It’s understandably odd to think malevolently of a company steadily jacking their prices up or tracking user data when their online presence consists primarily of “relatable” content in the form of poorly-crafted memes of their own shows (we should really just leave some things to the stans).

As of late, streaming services have become far more than the TV equivalent of libraries they started out as. Parallels to traditional online social engagement crop up frequently on streaming service platforms: there are the tabulated “Trending” sections that strive to remedy the FOMO in not knowing that show everyone is talking about, the infinite loops of content to scroll through that mimic addictive apps like TikTok, and the Watch Party feature that arose early in the pandemic to make isolated people feel less guilty about the amount of time they were spending watching TV alone. Where streaming services most notably cross into the realm of social media is with featured sections titled “Recommended For You” that, just like everything else on the internet, use algorithms to determine what you’d like best. And as nice as that sounds, to have a streaming service do the heavy lifting in picking out something to watch, the repercussions of corporations tracking our data make it difficult to absorb these social media-esque features without an air of uneasiness.

What is perhaps the strangest aspect of online corporate engagement is the responsive nature of the audience itself. The amount of sway they actually have is debatable, but it’s not for a lack of trying on their part. If you’ve ever scrolled to the replies of a Netflix tweet, you’ve most likely come to expect the steady slew of fancams, hordes of hashtags and copypasta blurbs from stan accounts begging and pleading with corporate social media managers to renew their beloved show that just got the boot. While Netflix has occasionally “saved” cable shows, it’s only seemed to further encourage fans to ineffectually scream into the void.

However, it can’t all be for naught, as the entertainment industry evidently still somewhat pays attention to the interests of the audience. After resounding complaints that TV networks of the 2000s were “falling off,” reboots have been all the rage; Disney Channel’s “That’s So Raven” and Nickelodeon’s “iCarly” are two of many in the latest wave of questionable reboot endeavors. And on that note, a moment of silence for our fallen soldier: the “Lizzie McGuire” revival.

Besides timely pop culture–soaked content, release formats have also adapted substantially to preserve cultural relevance and sustain online discourse. When Netflix first arrived on the scene, half of the appeal was in the fact that you could quickly catch up on the show everyone was talking about. Weekend binge-watching was fresh and cool and a way for TV as a medium to keep up with the fast-paced lifestyle our society encourages. Suddenly accustomed to the world being at our fingertips, shows had to drop all at once, ready to be viewed in a single sitting.

Our consumptive engagement with media seemed near insatiable for a time as Netflix originals quickly became trademarked for their “bingeability,” a new show arriving onto the catalog as soon as another left. There’s no guarantee of permanence with content on streaming services, but we could hardly notice, overwhelmed in the excess of content, the familiar coat of DVDs and reruns on cable lingering in the back of our minds as we made our way in this new era of TV.

Although I’m appreciative of some truly great projects that Netflix has given a platform to, they often get lost in this sea of content. We watch more TV and consume more media than ever before, but there’s a price to pay for the rapid availability of such content. In this latest surge of quantity, we have fallen prey to the allure of the classic internet conundrum: a massive surplus of available information makes it all the more difficult to discern the genuine quality of anything.

Apart from recent releases, Netflix has, for the most part, kept its tried-and-true formula, while other streaming platforms have experimented with airing shows under a traditional weekly release with the option to binge later. It’s no coincidence that this is most successful with shows that generate widespread discourse online. With Disney+’s “WandaVision,” timing was everything. Months deep into quarantine, people were desperate for a collective experience; Marvel and non-Marvel fans alike tuned in weekly, hopping online to discuss each plot twist or speculate on outlandish theories. HBO Max’s “Euphoria” struck a similar gold mine in its second season, as its younger fanbase quickly moved discourse online. As someone who has never watched an episode of the show and still knows every plotline, I can personally attest to its digital impact. Rather than have the attention last for a single week as people binged it, the conversation went on for eight.

I question whether either of these shows would have made the same cultural impact had they been released differently. There’s no magic formula, and the weekly release doesn’t necessarily guarantee longevity of relevancy, but it does give people the flexibility to jump in if it causes a buzz or tune out if their interest isn’t sustained over time. This return to the weekly release format is indicative of the real significance online discourse has on the executive decisions of television as it adapts to an existence in the new-age digital realm of discussion.

In all honesty, it kind of makes sense that TV would take the brunt of this phenomenon, as it has always been the artistic medium to most reflexively adapt and cater to the masses. It’s reflective of the media we engage with, as TV has the ability to not only participate in but manipulate the conversation entirely. We can look down upon cheesy jokes from Netflix “interns” or their latest flop of a show, but for better or worse, streaming services have utilized online discourse to change the way we, as a collective audience, consume television as a whole. As the classic proverb of “Ratatouille” goes, “Anyone can cook.” Not every show is a massive hit, but because of TV’s unique relationship to social discourse, any show has the potential to be. So yes, every so often Netflix gets it just right. That show is not “Is It Cake?” though, so please don’t watch that. I promise there are better things.

Daily Arts Writer Serena Irani can be reached at seirani@umich.edu.