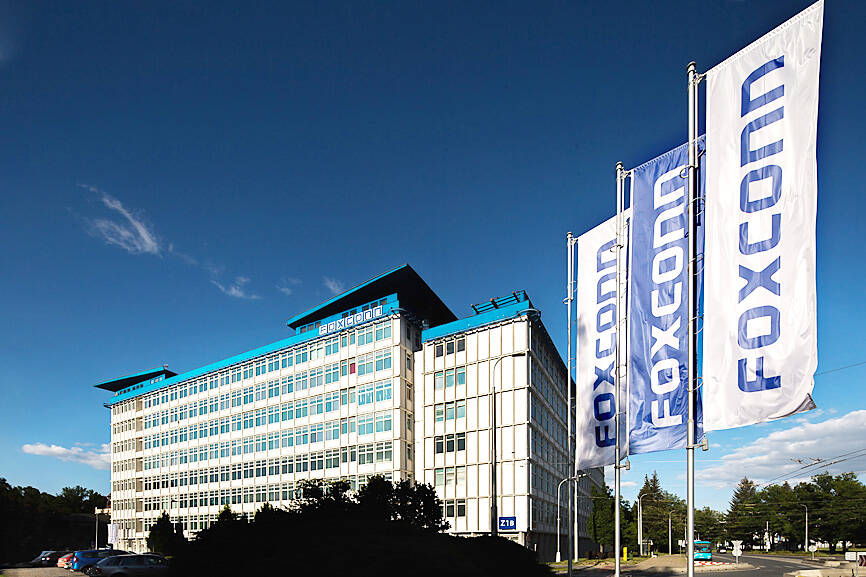 GLOBAL EXPANSION:
The manufacturer said it increased its stake in the Chinese unit to 1.5 billion yuan and started rolling out electric Lordstown trucks at its Ohio plant

Hon Hai Precision Industry Co (鴻海精密) has increased its investments in the Czech Republic and China by more than NT$6 billion (US$196 million) as part of its global expansion.

In a Taiwan Stock Exchange filing on Friday, Hon Hai said it has raised investments in its Czech subsidiary Foxteq CZ by US$58.98 million through its PCE Paragon Solutions Kft unit.

In the Czech Republic, Hon Hai has a research-and-development center and a product design center, and it assembles monitors, cellphones, wireless communication devices and cloud servers.

The iPhone assembler has also invested 1 billion yuan (US$142.4 million) in a subsidiary in Taiyuan, China, which produces electronic components, mobile communications devices and cell phones.

Hon Hai has in the past few years boosted its efforts to develop electric vehicles (EVs) as it seeks to broaden its product portfolio and boost its profit margin.

Lordstown last week announced that shipments of its Endurance electric pickup trucks made by Hon Hai on a contract manufacturing basis had started.

Lordstown said Hon Hai would ship the first batch of 500 trucks direct to customers after the model has received the needed certificates from the US Environmental Protection Agency and the California Air Resources Board.

Hon Hai makes the trucks at a factory in Ohio that the manufacturer acquired earlier this year from the US company for US$230 million. The plant is Hon Hai’s first EV manufacturing hub in the US. It is equipped to produce 500,000 to 600,000 vehicles per year.

In addition to the pickups, Hon Hai is planning to produce electric agriculture tractors at the plant from the first quarter of next year, after it in August signed a deal with US-based Monarch Tractor to produce next-generation electric equipment, including battery packs.

To strengthen its EV presence in the US, Hon Hai last month announced that it would increase its stake in Lordstown through a private placement.

It seeks to buy class A common shares of the company for US$70 million and series A preferred shares for US$100 million, Hon Hai said.

After the completion of the transaction, Hon Hai is expected to hold all of Lordstown’s outstanding preferred stock and 18.3 percent of its common stock, and would have the right to appoint two members of the company’s board of directors.

Through the equity investments, cooperation with Lordstown would run deeper than ever, Hon Hai said.

The US firm is expected to increase outsourcing orders to the manufacturer.

Lordstown, which began producing vehicles on a small scale in September and has over the past two years faced lawsuits from investors accusing it of fraud, is expected to join the Mobility in Harmony EV open platform led by Hon Hai.

Comments will be moderated. Keep comments relevant to the article. Remarks containing abusive and obscene language, personal attacks of any kind or promotion will be removed and the user banned. Final decision will be at the discretion of the Taipei Times.