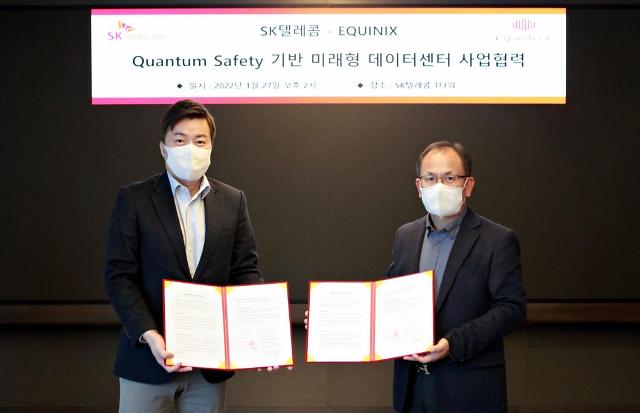 SEOUL — Equinix, an American digital infrastructure company, tied up with SK Telecom, a leading mobile carrier in South Korea, to apply quantum cryptography to dedicated lines between companies and internet data centers where many servers, routers and switches are managed autonomously. Strong network security can be provided as quantum cryptography communication services are available to corporate customers using data centers.

It would be the first application of quantum key distribution (QKD) to a global data center operator like Equinix, which runs more than 230 data centers worldwide. QKD is a secure communication method that implements a cryptographic protocol involving components of quantum mechanics. So far, QKD has been mainly applied to key network services provided by telecom companies.

The importance of cybersecurity in mobile communications is rising exponentially. Quantum cryptography has emerged as an essential solution for safeguarding critical information because it is impossible to copy data encoded in a quantum state. Cryptographers are designing new algorithms to prepare for a time when quantum computing becomes a threat.

SKT and Equinix signed a memorandum of understanding to cooperate in expanding quantum businesses such as QKD as a Service (QaaS), which is a promising pattern for future QKD networks. The two companies agreed to push for the commercialization of QaaS within this year while establishing a QKD environment at a data center run by Equinix in Seoul.

“It will be the first step toward creating synergy between Equinix, a global No. 1 data center operator, and SKT, a global leader in quantum cryptography and 5G wired and wireless communication,” SKT’s innovation suite head Ha Min-yong said in a statement on February 10.

Equinix’s digital services, including interconnections between data centers, will be used to make QaaS available in data centers around the world. QaaS would protect enterprise-only lines that connect corporate headquarters, offices, and data centers with quantum cryptography. SKT said the service would become a corporate subscription model in the future.


© Aju Business Daily & www.ajunews.com Copyright: All materials on this site may not be reproduced, distributed, transmitted, displayed, published or broadcast without the authorization from the Aju News Corporation.