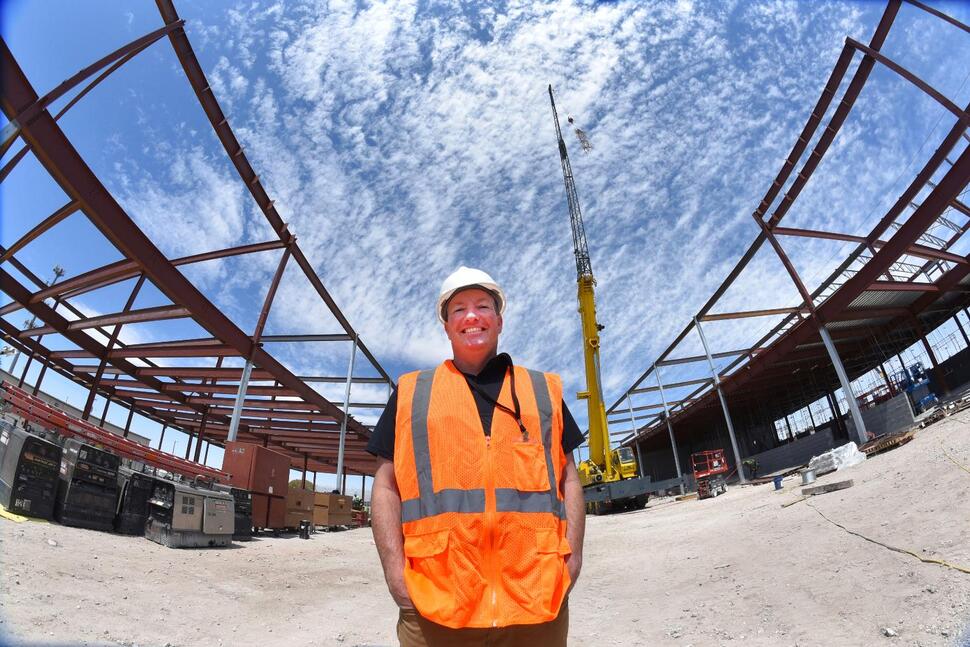 HOBBS, N.M. (AP) — Zeke Kaney has spent all of his teaching career in the Hobbs Municipal School District, and while each position he has held has brought its own excitement with it, the newly announced director of Career and Technical Education is ready to build even more into the community as head of the new $50 million Career and Technical Education Center (CTECH).

“This is the kind of job that will keep you around,” Kaney told the Hobbs News-Sun while smiling widely during a recent Friday morning.

“CTECH is going to have the largest impact on this region of anything that has come along in quite awhile,” Parks said. “We had to make sure we had a highly qualified person who understands the school’s significance in the community and could hit the ground running.”

What can be seen when talking to Kaney for any length of time about Hobbs schools or the CTECH is his passion for education — and for students. While visiting the construction site, almost every aspect of the project brought a smile to his face, and his eyes lit up when he explained how the center would serve the needs of students learning vocational skills.

“What a great way to spend your day with kids,” Kaney said. “Eight hours of this with kids being creative and building things with their hands and learning skills — that’s going to translate to future work in careers that’s relevant to them.”

Kaney will literally be building the future with students at the center.

“I think it will be a great way to spend a day,” he said, again, smiling widely.

Kaney, who is originally from Anaconda, Montana, started his career as a science — in particular physics — teacher at Hobbs High School. He has been with the school district about two and a half decades and served as the high school principal for six years before taking over as the director of operations for the district. In addition, Kaney has been an assistant principal at Highland Middle School, was the principal at Heizer Middle School and has been a golf coach.

After the 2019 bond passed allowing the construction of CTECH, he played a substantial role in the planning of CTECH and in meeting with local businesses and community partners — such as JF Maddox Foundation, the city of Hobbs and the Permian Strategic Partnership — to identify more specific community needs. Those partners have contributed about $30 million toward construction of the facility.

“He’s been involved in every aspect of this school since day one,” Parks said. “I know there’s nobody in the district that knows more about the facility and the way it needs to operate than Zeke Kaney.”

But moving from director of operations to director of career and technical education isn’t something Kaney said he was thinking about.

“It was a recent decision that felt like it was just the best move going forward,” Kaney said. “As well as I think this is just going to be a pretty awesome deal.”

Another aspect of building a new, state-of-the-art technology and vocational education center is fostering a greater sense of community.

“I like that connection you get when a community and a school connects on needs,” Kaney said. “I think it makes a stronger overall community. I’m looking forward to what it looks like three years down the road as we’re putting kids in positions for employment and internships and I’m really excited to see what that connection between industry partners and kids, and we’re helping the community, and the community is helping these kids.”

While the construction phase of CTECH is happening, there’s more than enough to keep Kaney busy as the director of operations and as the director of career and technical education. But one thing remains constant — Kaney looks forward to students learning in the center.

“There’s a lot of work that has to be done right now. You have to order equipment, you have to make sure things are getting done. There are always things needing attention. Opening a new building is not easy,” Kaney said. “When the kids are in there and we’re functioning, that’s going to be fun.”

Copyright 2021 The Associated Press. All rights reserved. This material may not be published, broadcast, rewritten or redistributed.