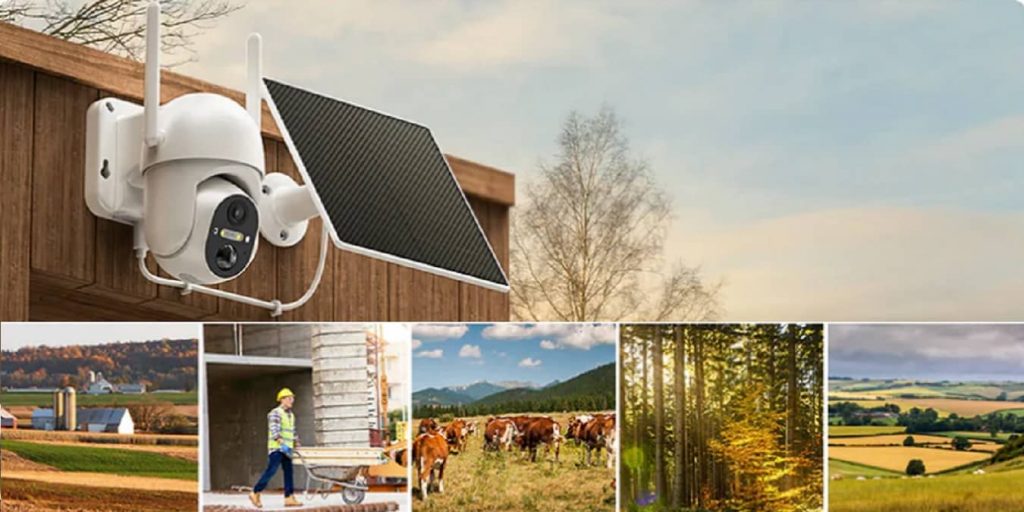 Wireless security cameras are great, but unless you just want to store video on an SD card and view it later, you’re limited to your Wi-Fi coverage. For those out-of-the-way areas where Wi-Fi isn’t an option, the Ebitcam 4G LTE Cellular Security Camera has you covered. It uses mobile data versus Wi-Fi to give you far more flexibility to keep an eye on things.

This is a sponsored article and was made possible by Ebitcam. The actual contents and opinions are the sole views of the author who maintains editorial independence even when a post is sponsored.

Be sue to take this Ebitcam survey for a chance to win one of 300 $15 Amazon gift cads.

The Ebitcam 4G LTE Cellular Security Camera is packaged well, which is a good thing considering the included solar panel. You can charge the battery with the included cable or with the 5W solar panel. The 10,400mAh battery can last up 50 to 60 days on a single charge, and the solar panel can fully charge the camera in just three to four hours.

The camera itself is surprisingly sturdy with adjustable antennas. It has an IP65 rating, so I’m free to place it out in the elements with no issues.

In addition to the camera and solar panel, the box also includes an EIOTCLUB 4G LTE SIM card that’s compatible with Verizon, T-Mobile, and AT&T. I was impressed to see all three major networks covered. Most 4G cameras only work with one or two networks. Plus, Ebitcam’s camera automatically switches to the best network for your location.

The card includes a seven-day trial with 100MB of free data. You don’t have to worry with activations or anything like that. And, when you need more, just buy more in the app. Pricing varies from $14.90 for a single month up to $229.90 for a full year.

A spacious 32GB micro-SD card is also included to store footage locally, or you can sign up for Ebit’s cloud storage service, which has a free seven-day trial. Of course, all the hardware needed to install the camera and solar panel are included, along with templates to drill the holes perfectly.

The included instruction manual is super easy to follow. The guide recommends charging the Ebitcam 4G LTE Cellular Security Camera fully before the first use. It was already over 50% charged when it arrived, but I plugged it in inside for several hours to get a full charge.

It’s very important to ensure the camera’s off before proceeding. The power button’s located in the sealed compartment at the camera base. Flip the switch and you’re done.

Once it was off, I was able to slide in the SIM and SD cards. Following the manual, I installed the Ebitcam app and created an account.

The app steps you through the rest of the process, but you can also continue to use the manual.

I turned the camera back on. You have to wait for the light on the camera to turn blue before proceeding, which took around one to two minutes. I was then prompted to scan the QR code on the camera to connect the SIM card to the camera. After that, it was ready to use.

The entire process took maybe five minutes, so it’s quick and easy to get started.

Obviously, the camera should be off while you’re installing it. I wanted to try it on a storage building that’s out of reach of my Wi-Fi. It’s a poorly lit area, so it’s a good place for testing the night vision. There’s also a built-in spotlight on the camera and advanced sensor to take clear 2K videos and photos both day and night.

Thanks to the 355-degree rotation, 100-degree viewing angle, and 4x digital zoom, I could monitor a wide area nearly anywhere I placed it on the building.

I used the included templates to drill the holes for both the camera and solar panel. Then it was a simple matter of screwing both into place and connecting the solar panel to the camera.

The solar panel has ample cord for you to place it further from the camera if you need a sunnier location for it. You can also adjust the angle of the solar panel for optimal sun coverage.

Once everything’s installed, I turned the camera on and started checking out the video clarity. The app makes it easy to check in at any time. I did notice some lag connecting to the camera at times, but that’s likely because the 4G coverage in my area isn’t always the best.

Also, the app isn’t always reliable. There were times it would stay on the Ubia homescreen and not do anything else. I wasn’t able to view the camera unless I received a notification. Other times, I had no issues. However, the app is constantly being optimized, so this issue may very well be resolved soon.

However, the signal stayed strong enough throughout my review to keep an eye on the area day and night. Using the app, I can adjust the angle, zoom in, save videos and images, and turn on the spotlight. That’s a great feature if you want to see things clearer or scare off someone or something around an area. It’s also good for buildings and campsites to light up the area to make it safer walking around at night.

While the daytime footage was surprisingly clear, the real test comes at night. Even a security camera that is just okay usually looks alright during the day. However, I was looking for clear video at night, too.

Without turning on night vision, I could actually see fairly well at night. I could make out bushes and trees nearby and even the occasional night animal walking by. Of course, you get clear video in color if you turn on the light.

Throughout my review, I never had to take the camera down to charge it. The solar panel worked extremely well in keeping the camera charged each day. Still, it’s nice to have an alternative charging method if you don’t have a sunny location.

The Ebitcam 4G LTE Cellular Security Camera is the perfect option if you need a camera in an area without Wi-Fi, such as when camping, a farm building, out of the way rural areas, or any other location without Internet. The only major cons I can see is that you’re still limited to 4G coverage areas, which aren’t always available, especially in many rural and mountainous areas, and the app doesn’t cooperate all the time. I’d suggest testing your smartphone in the area you want to use the camera to see if you have coverage before buying it.

Otherwise, it works well and is easy to set up. Grab your own Ebitcam 4G LTE Cellular Security Camera for just $199.99. However, if you clip the Amazon coupon, you’ll get an extra $30 off, making the camera just $169.99.

Is this article useful?

Our latest tutorials delivered straight to your inbox