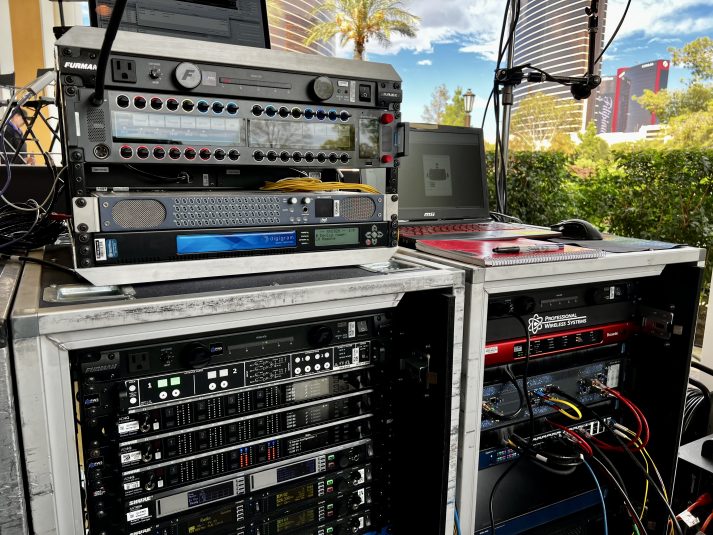 While looking for an audio live communications solution for the live broadcast of The Match — a one-on-one golf tournament between superstars Brooks Koepka and Bryson DeChambeau held at The Wynn in Las Vegas last November — Mark Steinmetz, senior manager of video technical operations at Bleacher Report/Warner Media needed an audio codec that was redundant, reliable and, most importantly, could handle a REMI production. As a typical REMI stream, with the event being captured live on site and the control room staff being handled at Bleacher Report in New York, Steinmetz selected Digigram’s IQOYA SERV/LINK and IQOYA CONNECT for its reliability and Dante connection to the production’s communication system.

“When Don Kuser from Professional Wireless Systems initially talked me through the capabilities the IQOYA system could provide for our remote workflow, I knew we had to try it,” says Steinmetz. “IQOYA opened up a whole new world, making everything run smoother for the producers. The audio was coming in from 2,400 miles away, but it was so clean that you couldn’t tell that there wasn’t a broadcast truck on-site.”

A REMI Stream Dream
REMI — or remote integration model — is a production workflow allowing live content to be captured from a remote location and managed at an off-site control room. Steinmetz said the IQOYA SERV/LINK and IQOYA CONNECT decreases the amount of broadcast trucks needed on-site thanks to its multi-functionality.

“It saves all REMI productions from having a truck on-site every time because you only need a few of the features the truck allows,” he explained. “The IQOYA CONNECT takes care of all the routing. And it allows for multi-set monitoring. You can’t do that without it. It was nice to monitor the bitrate and the jitter via the Cloud.” “The IQOYA System allowed Bleacher Report/Turner Sports to not have a full truck on-site and not have to worry about what truck is in the area or how much it’s going to cost,” says Kuser of Professional Wireless which rented and installed the system on-site. “Now we basically have a giant digital audio snake from New York to anywhere in the world as long as we have an internet connection. I knew this technology would be a gamechanger for our clients when we saw it.”

Due to the pandemic, production companies have cut down on the number of people working on-site, a place where where the IQOYA system comes in handy.

“With less people on-site, something like IQOYA is big because it’s brand agnostic as long as we have one on both ends,” adds Steinmetz. “It ties a bunch of systems together, so that’s really exciting.”